Then there was one!

Not one of the most attended days for a Wednesday, about 20 volunteers signed on today. With Julie and Steve in the bric a brac, John B visiting and checking all was well with the staircase footings, Neal working on the roof and a few tradesmen on site, the number of actual volunteers were thin on the ground.
But what there was on this sunny Wednesday soon set about the days tasks, on going and the new ones.

Since last Wednesday both of the staircase shuttering`s on platform 2 have been filled with concrete and on Saturday the shuttering had been released and some of it removed. 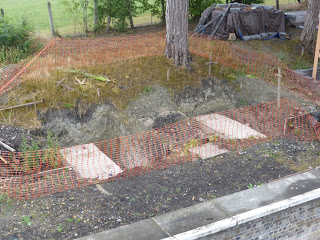 Today with all the shuttering having been removed it was up to Vic and Dave B to start the infill.

There is never a JCB around when you need one !

Another job started since last week was the starting of the gable end at the south end of the station building. John C had made a start on the fixing of the tongue and groove planking with the lead flashing above the wall. 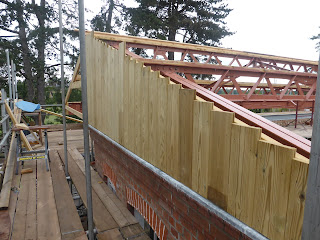 Else where on the station steelwork Peter Q , Brian and Dave virtually completed the wood work on the platform side. 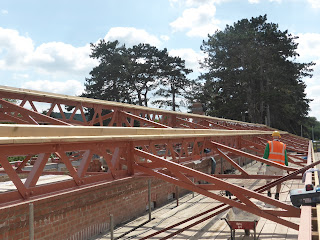 All that is left is the fixing of the Mop stick on the ridge and after painting of the woodwork the glass sheets and roof sheets can then be commenced to be fixed.

Seen in the above picture Brian is seen looking for places that they have forgotten or missed out in the painting. The usual painting team was up on the metalwork now in places doing the final top coat. 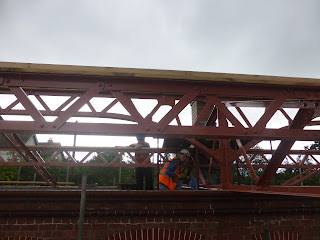 Even in the most awkward places as Graham knows all about. Its that chimney again!

The painting team having finished the station metalwork then started on the roof corrugated sheets. 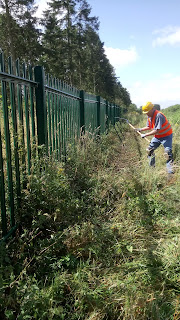 Rod and Terry disappeared for a few hours to the north where there had been a problem of deer running into the boundary fence and slightly moving some posts. The fence has now had extra stays added to prevent this happening again.


Last weekend saw the start of the dismantling of what was the shelter where the spear fencing was cleaned and painted. Today it was the turn of the ex dumper shed and where the spear fencing was created  "shelter".
Rod, Terry and Clive and with Mike inside, decide on which way to dismantle what is probably the longest standing of our temporary huts. Martin in the background strips down and sorts out the remains of the painting shelter. With the metal sheets stripped off its down to maybe the Saturday crowd to dismantle and remove the frame. This now leaves only one temp shelter which the carpenters still use for the storage of the next load of dagger boards for the station. Soon as the dagger boards are needed and moved to the station its bye bye to this shelter too.

Whilst we in the area, Steve of  "JCB" fame drove past followed by a tractor and trailer with a buffer stop on board. 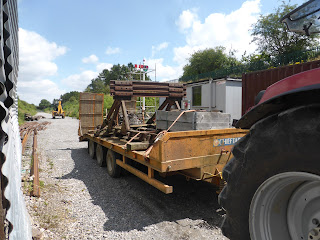 It was destined for the north of the track bed, its the first one of two. There was also a mention of track laying up there in the near future!

Back on platform one, its getting very close to closing the gap.


Above left was a trial trench dug to make sure the foundations had previously been put in , and the right hand picture Steve is widening and clearing either side of the foundations in readiness for the block and  brick laying teams.

And finally from the station scaffolding and in the distance just this side of the Childswickham Road bridge we now can see the two sleeper wagons parked up plus the occasional orange jacket working on the track bed. 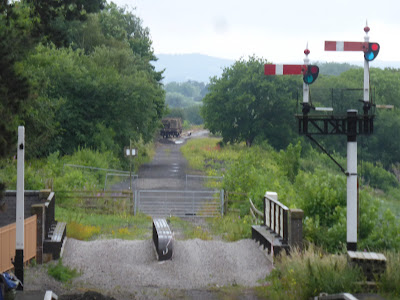 Posted by David Holdsworth at 22:07