The Gap is Closing, Mind the Gap

The threat of rain for the day came to nothing , it was overcast and warm, but pleasant enough for the 24 volunteers who turned out today .

On going tasks on the station roof were the fitting of the woodwork which will support the glass panels and corrugated roof sheets. 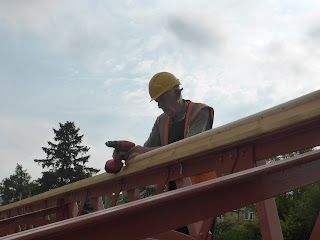 The delivery of more Mop sticks saw Peter Q and Dave H back on the ridge, almost completing it, just needs an extra one to complete the job.

Moving then on to the last of the platform side fascias boards to be fitted. 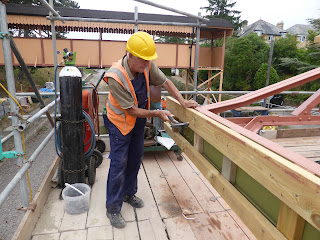 Later in the day, and after another few hours creating yet more dagger boards, they decided to have a trial fit of one of the said boards to see what it will or should look like. 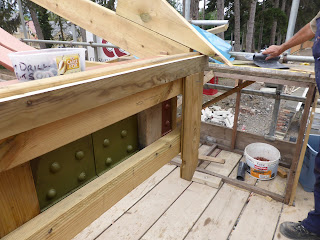 The upper board will eventually have the guttering fixed to it and the dagger board will butt up to the same wood. All will hang 7.1/2 inches below the bottom fascia board.
And did I mention it all needs painting!

John C completed the trimming of the gable end on the road side. 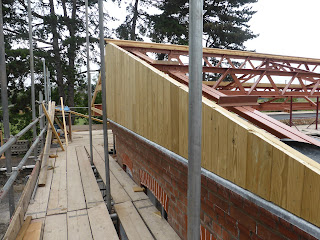 Also around the roof saw Bob and John S working on the two chimneys.

No painters (thank god) were on the station building today (we never know what they have painted and we get covered in the stuff) they were back on the roof sheets. Ray carried on the painting of the many dagger boards. 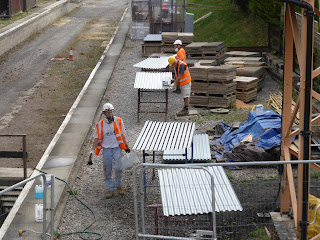 Graham, Mike and Brian had a bit of a production line going on, decreasing, washing and then priming. Still loads more to do.

Away from the station building and on platform 1, Tony and Clive were closing the gap. Layers of blocks were rising from the foundations. 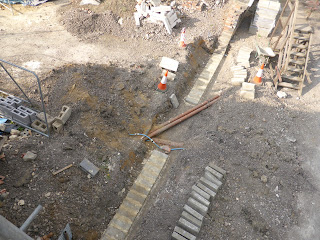 On Saturday they had laid the first of the blocks, the duct pipes run from the signal box to the station building. This will eventually carry the services etc to the signal box.

At the end of the drive by the main road saw Rod and Terry fixing a new piece of spear fencing next to the two original panels.To complete the job the bottom of the fences were then concreted in, and then smoothed out.


The two originals just now need cleaning and painting to match the new one, and jobs a  "good un "

Around the site the non stop job of keeping the vegetation to minimum. Vic had a new grass cutter (lawn mower) to play with whilst on the top of the cutting opposite when we were trying the have our lunch Brian was attacking the vegetation with gusto!


The previous day we must have had on site a visit from S & T because some of the signals posts have grown brackets, levers etc and the wooden starter on platform 1 has now an arm. 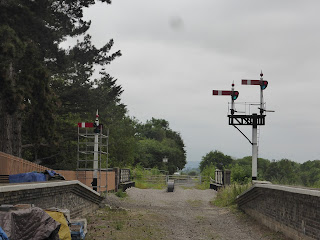 Its beginning to look like a station, just need a few tracks.

And finally a new animal on our list of animals seen around Broadway Station. 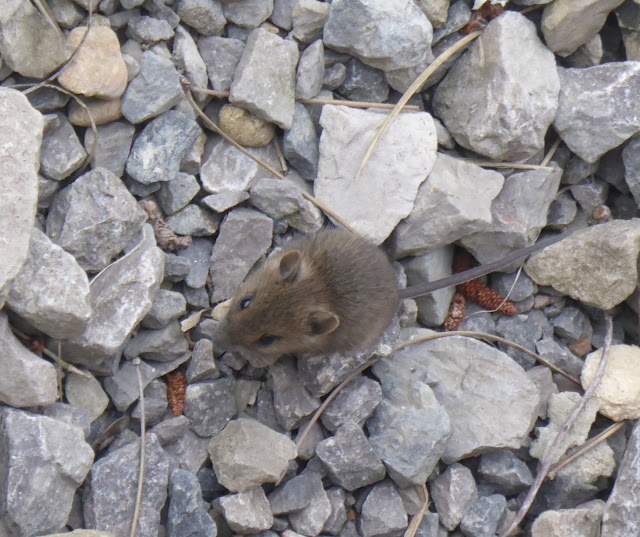