The weather forecast had predicted another warm day in the Midlands with temperatures in the high 20`s, up on the scaffolding and down on the track bed it felt much hotter. Most of the volunteers tend to carry or have close by some form of fluid to replace the buckets of sweat that we lose during today's grafting.

The top of the station saw most of the action from various groups of volunteers.

Below, John C has progressed the brick work on one of the chimneys, the stack will need to be corbelled out before the chimney pot goes on. 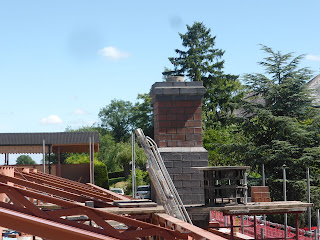 The only other bricklayer on the station today was John S, here seen completing the back filling of the last section. Compo dutifully supplied as ever by Paul and Keith. 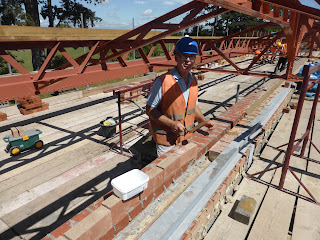 Another group up on the scaffolding were the painters giving the whole structure its gloss topcoat.

Graham in the first and the two Mikes were eventually joined by Brian and by close of the day most of the metal work has been covered! 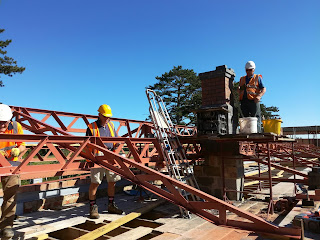 John C working on the chimney, Mike and Brian on paintbrushes, blue sky all around.

The 3rd group were the carpenters Peter Q , Brian and Dave H. The right hand above picture shows what had previously been done to the platform side fascia. What was done today was a start on the ridge and purlin woodwork. 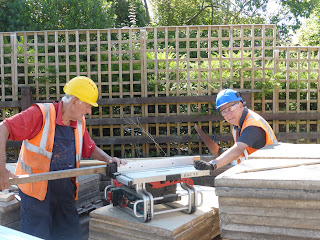 After Brian and Dave had finished drilling the remaining holes in the steel work and the steel brackets, they then went to help Peter shaping the lengths of wood for the ridge. 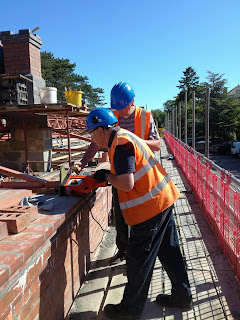 Drilling holes with the right kit is so much easier. Brian drilling one of the many holes in the steel work with the magnetic drill with Dave H providing the lubricant. 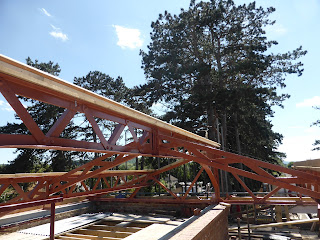 After a number of lengths were created they were then taken up to the station and bolted and screwed in place. and then a length of Mopstick was then screwed to the top of Peter's shaped wood, the ridge will then have lead moulded around it .

Also around the scaffolding it was a general tidy up time, with only chimneywork to be done all excess and unneeded bricks etc were removed  over to the platform 2 area, this was done by Clive, Paul and Keith.

A delivery of type one ballast helped clean and tidy up the end of platform 1 north, then Terry and Rod with the assistance of the Fairview lorry completed the platform slabs on 2 north which had started last week.

They then moved onto 2 south to refixed the platform slabs knocked off by ????

Something else had appeared at the end of Platform 1 north yesterday! 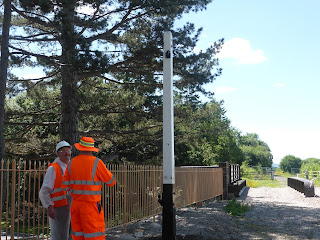 A wooden starting signal, Ray (now painting the spear fencing for last time) talking to an interloper from a distant work party seen on the horizon. A group were cutting back the overgrown undergrowth by Caravan club fence in preparation for track laying .

Also around the site, John C continued with the gable end woodwork, the forever growing grass gets yet another cut, Julie and Steve maned the bric a brac shop and the site continued with a general tidy up.

Has anybody out there got a petrol Flymo that they don`t require? The person who does the grass and vegetation cutting struggles on some of the embankments and with really long grasses, he asked me to put on the Blog a request out for one. We don`t mind if it needs attention our lads are pretty adapt at fixing things. We will collect within reason. After all, if you don`t ask you wont get.