Cold but a Hot Day for most

28 volunteers turned up on probably the first frosty morning of the year, the day started off cold but soon turned out to be a pleasant dry day, soon many of the volunteers one way or another were feeling the heat! 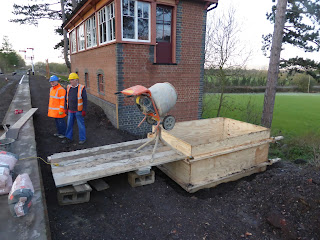 The main task of the day was the mixing of the concrete and filling of the shuttering by the signal box. This will be used as the foundation for the signal box stairs.
Here we see the temporary platform and mixer ready for action. 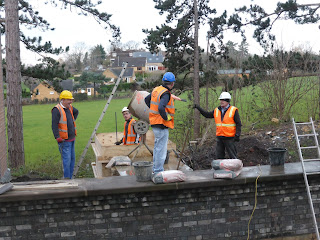 Elsewhere John C on the mini digger and Steve B on the dumper were bringing the aggregate to the waiting team. 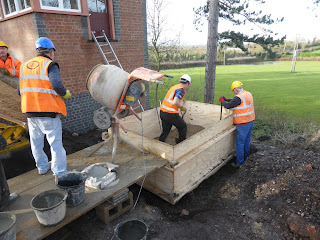 Our youngest volunteer Peter had the job of spreading the dry mixed concrete into the corners of the shuttering.

Also just seen on the left is Steve B with yet another dumper load of aggregate for the mixer. 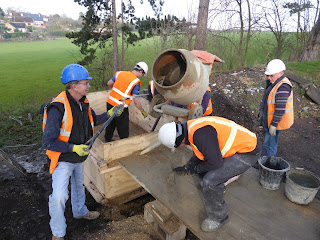 Around mid day this was the level in the shuttering, only another foot to go .But we were running out of aggregate so off John C went to the suppliers.
With this last bag we just managed to get to line on the inside of the shuttering.

By Saturday the concrete would have set sufficient for the shuttering to be removed . 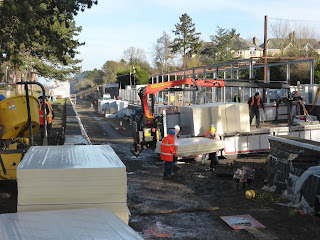 Meanwhile we had a delivery of the insulation for the station floor.

Although they looked and were light they were one of the most awkward things to lift and carry and with much ado they are now stored in the signal box locking room. 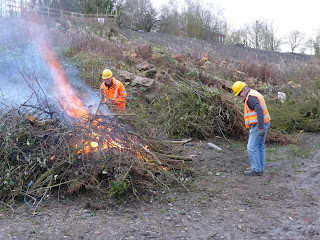 Elsewhere in the car park Rod and Terry were having the first bonfire of the year.
Burning much of the trees, bushes and scrub they had removed from around the ditch and car park.

They were later joined by Brian and others to continue the ditch and car park clearing. 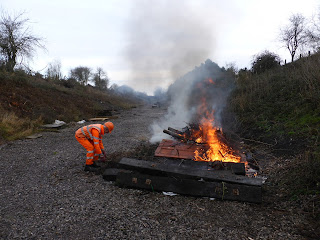 Not just one bonfire but a second, this one was on the north track bed. Gordon finally lit the pile of rubbish that had been there from well into last year, but with the wind and rain nobody had, had a chance to light it. 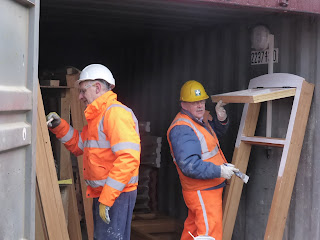 What must have been the coldest job of the day, went to Keith and Mike . They stood for hours in container 3 priming the many window frames. 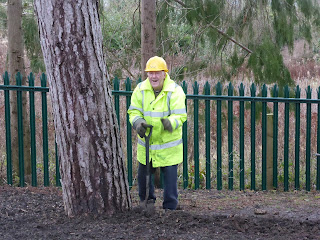 The work on the station building was put on hold today as most of the volunteers tackled the filling of the shuttering .

But Bob J did a great job in cutting bricks in half for the station, he must have done about 30, not an easy job.

And finally Vic looking after the shop while still gardening.

Couldn't resist this shot though the window of the signal box, we have had a visit from S & T !! 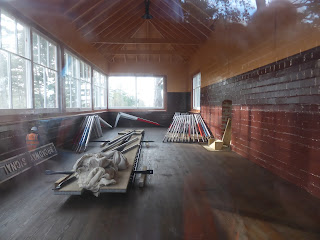 Posted by David Holdsworth at 10:19