No progress on the station building today, as such, but 15 volunteers were gainfully employed nonetheless 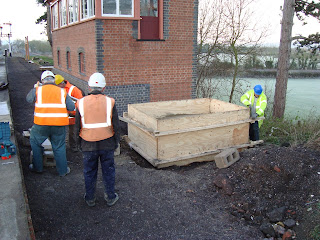 First job of the day was to remove the shuttering from around the concrete pad that has been cast for the signal box steps to land on. Dave is taking the bolts out of each corner while John and Steve are dismantling the scaffolding that was erected for the concrete mixer. 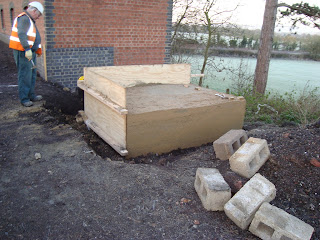 With the shuttering partially dismantled it gives some idea of the size of the slab. Proceedings were held up for a time while Steve dug out some infill that had trapped the shuttering on the signal box side. Steve's yellow hard hat can just be seen at the left hand end. 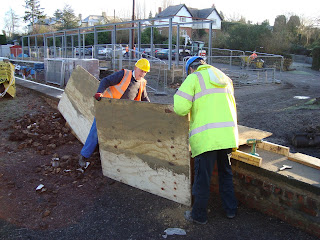 Peter Q and Dave, the carpenters (before you ask, their singing is not great), removed the two reinforcing strips from each of the shuttering sides and carried them back to other end of the site...... 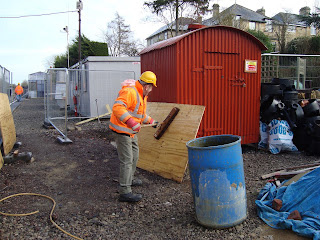 ....so that Peter K could give them a good cleaning. They will now be put back into stock waiting for the next shuttering job to come along. 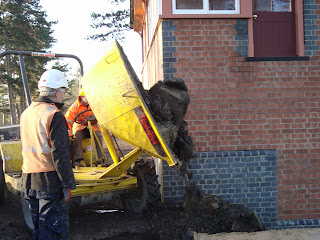 Later in the morning the opportunity was taken to fill in the area around the concrete slab with ash to front and soil/clay around the sides and back. Steve is dumper driver while the operation is being overseen by Robin. Others are close at hand to spread it out and compact it to some extent. 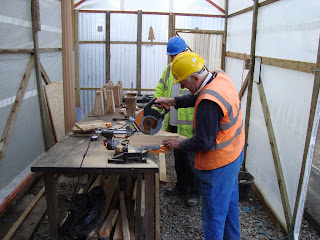 Back in the relative comfort of their carpentry shop Dave and Peter continued the task of preparing the four sided cones, seen in the background, for the second footbridge foundation casting. The cones are used to hold the footbridge securing bolts in place while the concrete is being poured. These cones are a more traditional method of holding the bolts as using the modern device to hold them was not 100% satisfactory. 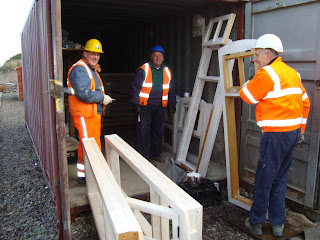 The component storeroom/paint shop was home to a cheerful gang of painters putting the first coat of primer on the station window frames. Mike, Brian and Keith S taking a break from their efforts to smile for the photographer.
The weather, currently, is giving a small problem to the painters as the paint is taking longer than usual to dry, still being tacky on the next work day. 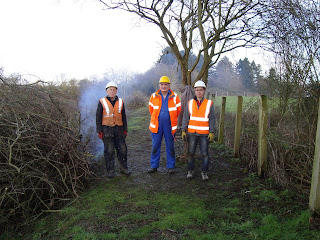 Robin, Keith G and Peter S are the three smokey Joes trying to burn the cut undergrowth on the embankment to the north of the station. Lighting the bonfire was proving to be more than a little difficult. It is not always true that there is no smoke without fire! 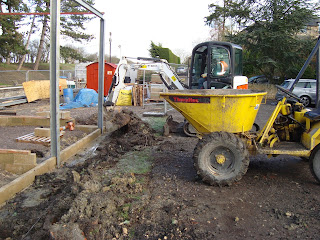 The Bobcat digger was fired up again in the afternoon to continue the trimming back of the soil between the station building and the driveway. The soil was proving to be a nuisance to the bricklayers as it was close enough to the blockwork to make working difficult, mud was everywhere on this side of the building. This should improve things. 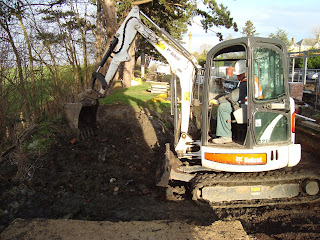 Next job for the digger was to level off the soil behind platform 2 in the area close to the signal box. This had been a dumping ground previously and was covered in bits of brick and other building rubble. The rubble was pushed to the bottom so that cleaner soil could be spread over the top at some point. 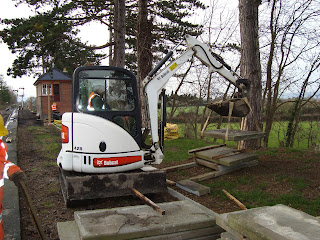 The last job for the digger today was to move the platform edging slabs off the platform so that, in the next couple of weeks, the foundations for the second footbridge tower can actually be dug out. 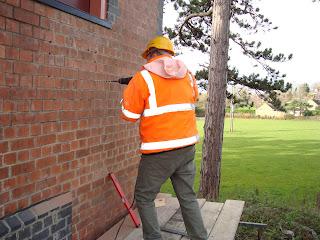 Peter K and John S set about installing the large support brackets that Peter K made recently in his workshop. The brackets are to give support to the landing for the signal box steps. Peter is drilling 18mm holes through the brickwork to take the 16 mm fixing bolts. A temporary scaffold platform was erected to do the job. 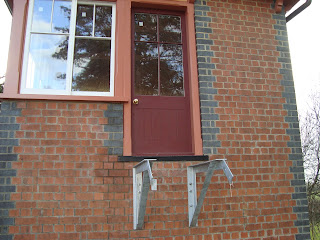 The brackets in place at the end of the day. They will, in time, be primed and painted black and most of the steelwork will be hidden behind the woodwork of the steps.
A landing is a requirement of building regs. these days.