12 volunteers dragged themselves out of bed this morning, made it to Broadway and settled into one or other of the day's two main activities. 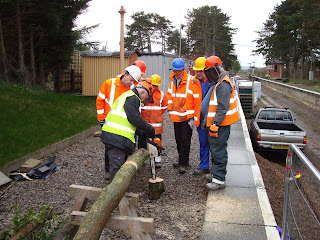 One of these was chainsaw training. Chris, the railway's training officer in the yellow hi-viz, is giving the trainees, Phil, Jo, Steve, Roger, Keith and John. the lowdown on the essentials for safe operation of the saw. There are things to check on the saw before it gets anywhere near the wood, some common sense, others not so obvious. 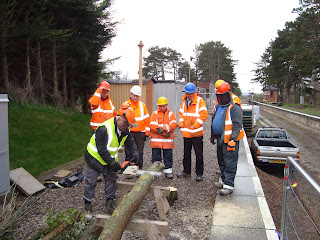 Our fine body of men are a picture of concentration as they get the first of many practical sessions, during the course of the morning, dealing with the cutting of a horizontal length of timber. Additional skills are required, it seems, before tackling a tree that is still pointing skyward but it will all be worth in the end. 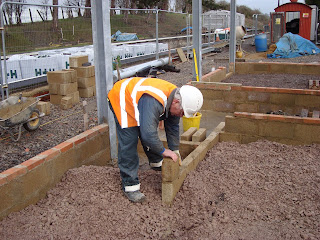 The station building was the other main area of activity, obviously? Well on the way in today with the rain lashing and the weather forecast potentially a bit grim it didn't seem that obvious but luckily the rain saved its worst until lunch time and came back with a vengeance on the way home. Following the chainsaw course John C had set himself the task of building the footings for the modesty screen for the ladies toilet and is just starting the second course. This went very well and before long it was possible to lay the ballast in this area.
In between other small, as and when, jobs Peter S, Dave and Robin took up this challenge. 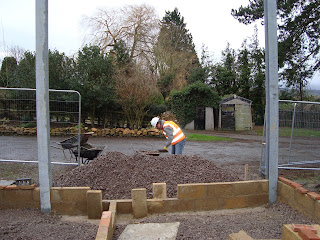 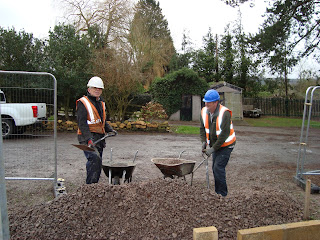 Dave had to complete a vital piece of carpentry, fitting a shelf in a location cabinet, before getting on the shovel and Robin.... 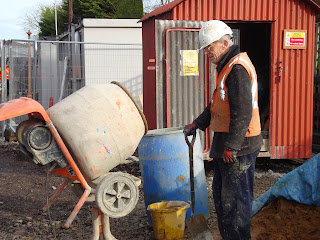 ...had to mix a load of mortar before being allowed out to play with the other boys. 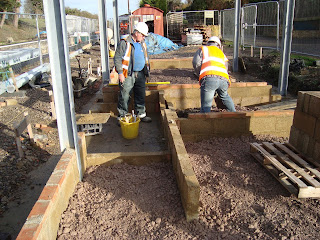 We had a very welcome sunny period around the middle of the day and the good light helps to illustrate the progress made on this section during the morning. The completion of the footing for the modesty screen in the ladies powder room, in the foreground, has allowed the remainder of the ground to be covered in ballast and work has now started on ballasting the next room which is the disabled loo. 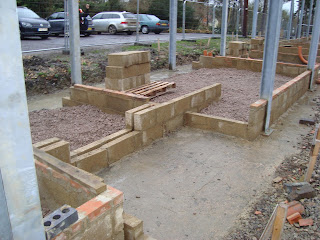 And this is how it looked when the boys had finished, looking in the opposite direction from the view above. Getting the ballast down and building round the doorway areas has made a tremendous difference to the whole building. Stepping in to a room through the doorway really feels good.


Blog readers have asked how the outside part of the footings are going to be built over the base plates for the stanchions. The following photos show what we decided to do. 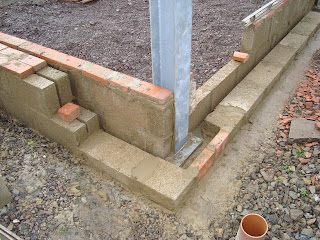 First of all we made a change from the method at the gable end by laying the blocks face down instead of on edge, this will be continued along the front of the building.
The area bounding the baseplate was laid with bricks on edge. 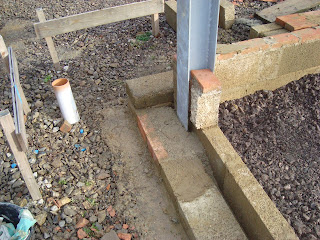 The resulting space was filled with a "dry" (only slightly wet) concrete mix. A dry mix to quickly provide support and not try to push the bricks out. 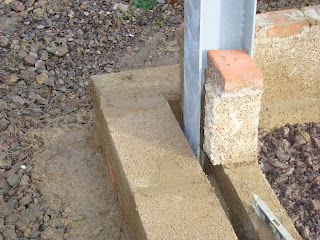 Using this method continuation of the block laying could and did start almost immediately. This is the same stanchion as above with the next course of blocks already laid. The part block sitting in the stanchion is the north side of the doorway to the gents toilet. 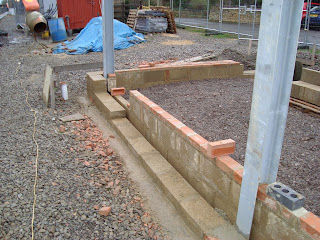 How it looked at the end of the day with similar progress made at the opposite end of the building so that next time construction can continue and run the blocks through from one end to the other. The 50mm gap between the inside and outside courses of blocks will be filled with concrete in due course 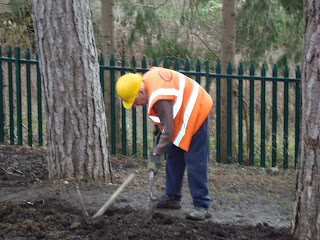 Vic carried on with the preparation of the area that is destined to be a picnic area by the time the station is open. Keith and John B shared bric-a-brac shed duties so that Keith could spend some time priming the station window frames that are currently in store.