John and Neal were busy creating a fireplace in the Refreshment Room. 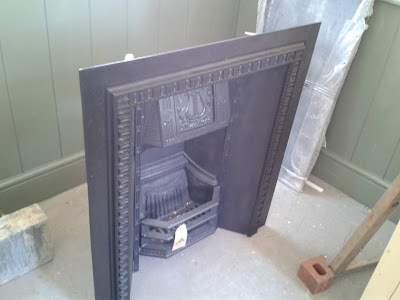 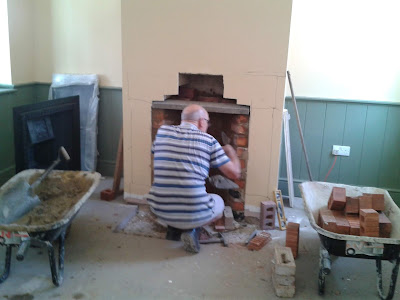 Also in the Refreshment Room was Mike S priming wood ready to be used on the Modesty Screen outside the kitchen. 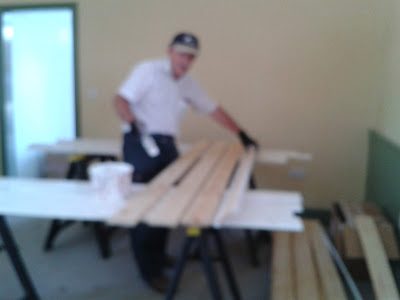 Our carpenters, Peter and Dave, were busy making another picnic table. This one will be octagonal in shape. 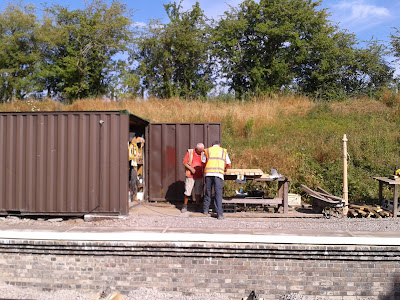 Tony, Ron and Vic reset the posts for the disabled parking area which is now opposite the entrance to the Station. Further work will be carried out on Wednesday to finish the fixing of the posts. Vic also carried out duties on the weed killing front.

A Class 37 Diesel arrived. Unusual for a Monday! It had come from Toddington to pickup some flat wagons for S&T to load the concrete troughs stored on Platform 2. 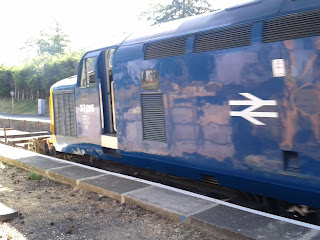 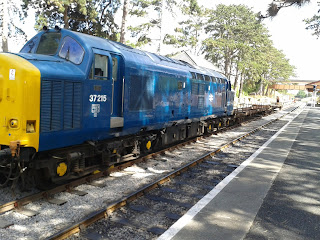 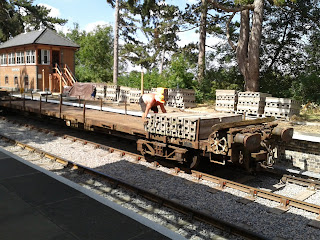 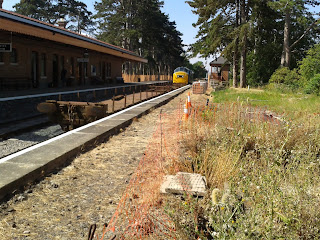 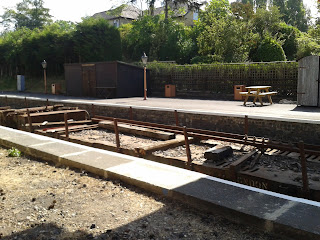 A team from the S&T dept were also at Broadway Station making progress with the rodding for the turnouts at the northern end. 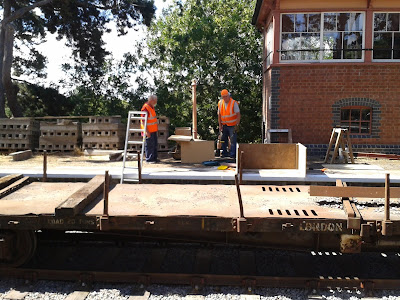 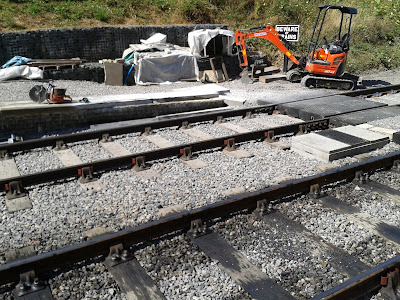 Making a box for the compensators and adjusting the platform end so that the point rodding is able to pass through.


Today, work commenced on the construction of a car park near the Station. The permissive footpath, running from Evesham Road to Childswickham Road, will be closed for 12 weeks. 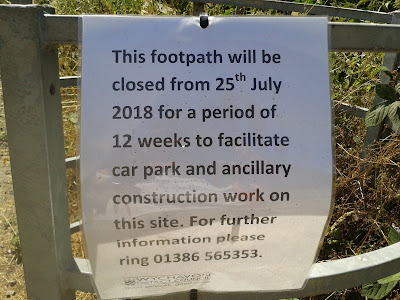 
We had a film crew here today capturing a departing steam train to Cheltenham. The Lygon Arms Hotel are compiling a promotional video of Broadway Village which will incorporate Broadway Station.

A team were busy at the north end of Platforms 1 & 2. Tony, Bob and Steve were sorting out a catch pit, whilst Rod, Terry and Clive were finishing the fence posts installation. 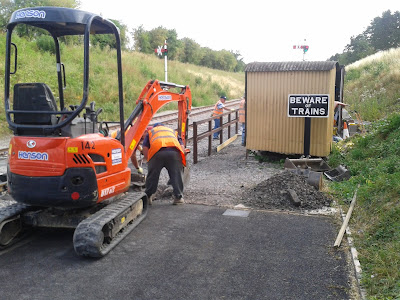 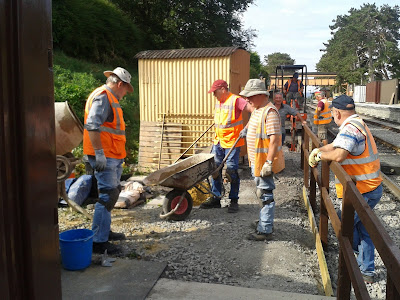 In preparation for the three day event, two gazebos have been erected next to Friends of Broadway Station Shop. This involved Peter, Dave, Paul and Ron bringing tables and chairs from the messroom and storage areas. 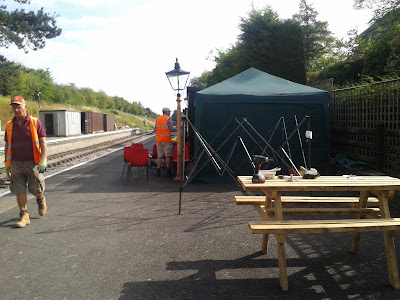 
The goods shop today was operated by Steve and Julie who encountered a goodly number of visitors throughout the day. 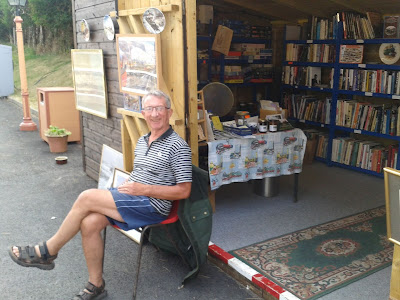 Containers arriving for the commencement of the Wychavon DC car park near to the Station. 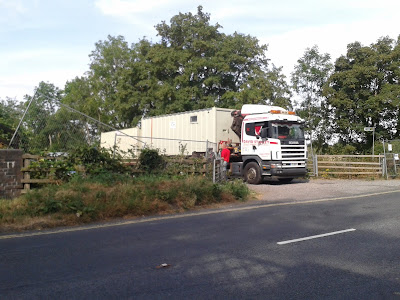 Vic (your blog reporter), was on station duties today as Station Assistant (Porter), working with Bob (Station Master) and Phil (BOC). Some people travel a long way to work on our railway, York is where Bob commutes. I'm lucky, only a 10 min drive for me. 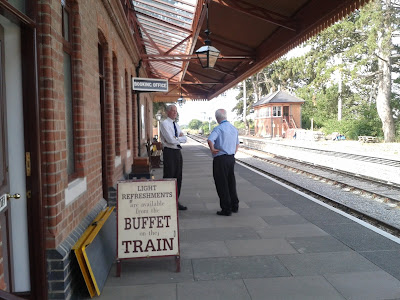 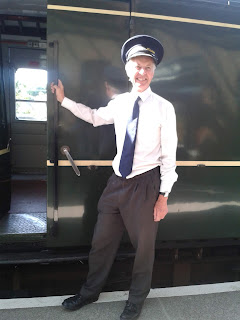 
Broadway is proving very favourable with folk wanting ride on our trains. We had a queue of people wanting to buy tickets which extended beyond the doorway and the first train from Cheltenham is always popular with passengers wanting to spend the day in Broadway Village. 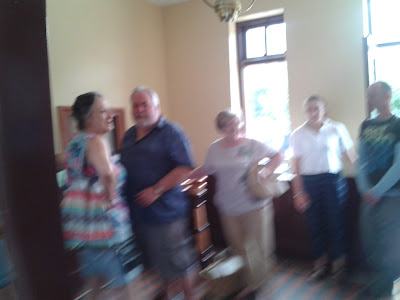 
It's not "If you go down to the woods today" but we did have a visit from Paddington and Broadway Bears. Next month, all Tuesdays will be Teddy Bear Tuesdays, so come along and bring your Teddy for a train ride. Broadway Bear has been with the railway since 2010, when he was rescued from Marguerite's Bric a Brac Shop at Toddington. 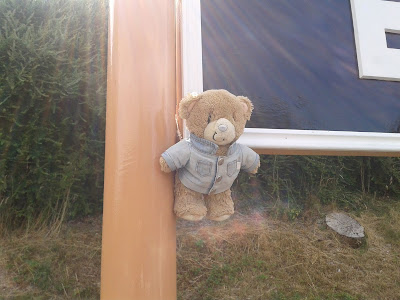