It was certainly a mixed bag weather wise today, 21 volunteers plus plenty of visitors, contractors and at the station front Building & Services Dept. The day started overcast, sleet and then a drop of rain moved in followed later by a bright end to the day, but throughout the day there was the cold wind. Could I mention that if you visit the station in future please wrap up warm, it has been mentioned more than once that it seams to be a cold station.

Today we had a delivery of second hand paving slabs, they had been acquired by Terry at a very reasonable price and after two trips to the the Midlands all had been unloaded ,sorted and stacked.


As you can see by the first picture many hands make light work by the second picture and after lunch there was only yours truly with Brian and Dave. The novelty must have worn off. These second hand slabs will be used under the canopy

In the picture, below right, are stacks of new slabs. Most of these slabs will be used at the front of the station building where Building & Services were in the process of laying the granite edges.

The slabs will eventually go between the Station Building and these Granite blocks.

At the platform side a team of John S, Bob and Terry were laying more slabs, today's effort saw nearly 30 slabs laid, not quite matching Mondays but on Monday they had a bigger team. The special mix was delivered by Paul. 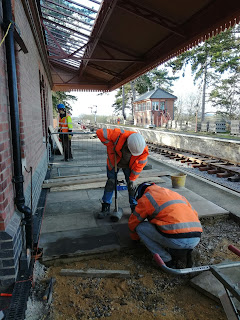 In the next session of laying they should easily pass halfway as there are only rows to go to reach that benchmark.

Two painters on site today, the two Mikes as per normal.

Monday saw Mike giving the panels for the cafe a once over with primer, these were then temporarily cut and fitted in the cafe, by the Carpentry team, mainly to get them out of the way as its getting cluttered in the rooms. 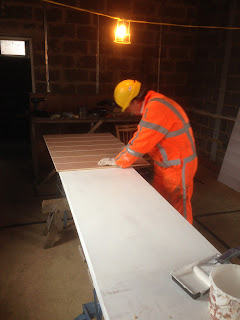 Above Mike is seen giving the panelling a once over, below the panelling and being used as a useful work bench, is the new running board. Pete and Dave H put it together on Monday before the other Mike primed it.

Today saw the Board have the screw holes filled and then another coat of paint applied. Eventually it will have a decorated edging  with a rainproof top. More pictures of its progress in the future.

Outside Mike was seen painting the new gates and then a first coat on Mondays newly installed posts. 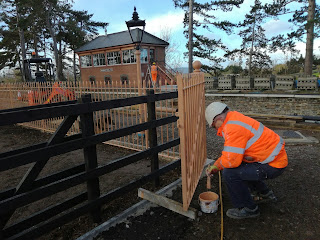 In the back ground the other Mike is moving the lamp heads from platform 2 over to complete the row of lamps on platform 1.

The newly installed posts were having trouble with their over sized finials. Tony with the aid of the grinder helped .

The Final job after each has had a coat of red primer. 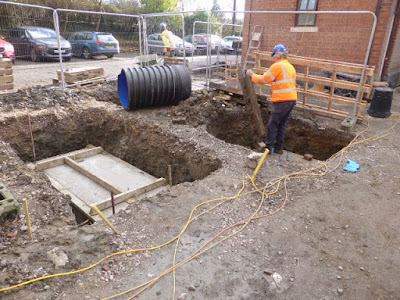 One thing that happened on Tuesday was the filling of the three shuttering boxes with concrete. The nearest box is where the support for the staircase landing will sit. Neal is standing on the slab which will carry the support for the canopy extension as will the one behind the large pipe.
Neal after removing the shuttering will then cut the large pie in half to protect the bolts. The pipe will sit over the bolts and the holes will then be backfilled with spent ballast up to ground level and then covered over with slabs. Staircases to be fabricated when funds become available, in the mean time its back to getting the station ready.

The tilers have finished the Gents and the Disabled toilets and are now in the Ladies, but one tiler has been working in the Booking Hall. 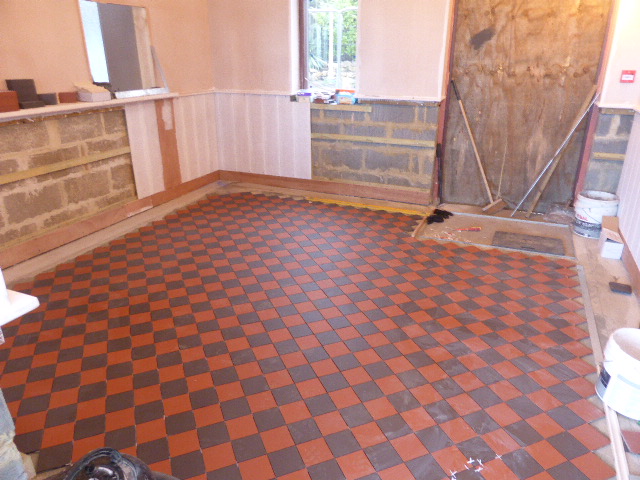 Its worth a large picture .

All day we had those pesky P/Way people driving by in their Class 73 with the ballast wagons and Shark attached. first down platform 1 line, then back up.  Down  platform 2 line and then they disappeared. They came back, went down the platform 2 line made a racket dropping Ballast and then went home. All this is can be read on Jo`s excellent Extension Blog.

But what he hasn't got is a picture of the train from the Cafe window!

Posted by David Holdsworth at 20:37