Raindrops Keep Falling On My Head

Wednesday 24th January 2018
It was quite horrid for most of the day, being wet & windy, but 26 volunteers signed in to get on with several tasks.

Indoors:
Those indoors were kept cosy from the adverse elements and seemed that bit more cheerful than the rest of us working outside.

Mike T & Mike S, supervised by Graham, were busy putting a coat of matt sealant on the walls above tile level in the toilet areas. 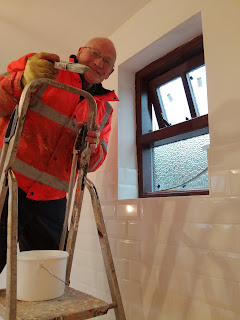 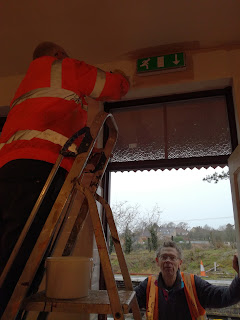 The Carpenter Crew were busy producing a supply of large aluminium washers, which will be used, as part of the cable support, when we fit the station lamps. 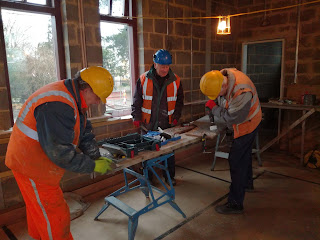 The tiling contractors were with us again, & I took this shot of the Booking Hall, with the floor marked out and tiling underway. 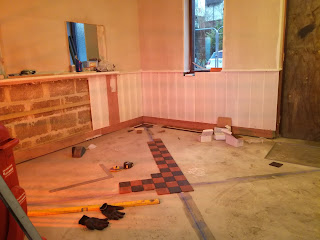 Outdoors:
John C, John S & Tony continued with pulling through the cables for the driveway lamps. 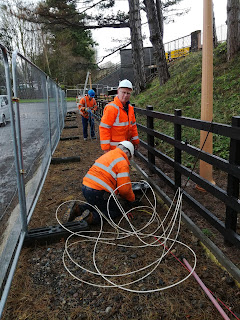 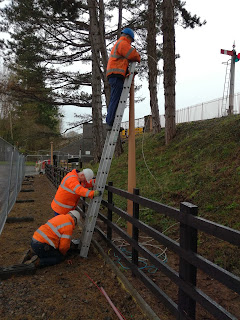 A large team was assembled to move paving slabs to the platform station area. Work then commenced with the laying of slabs under the canopy, which certainly helped keep us dry & it was only the strong wind to contend with.

Bob W takes a 3x2 from storage at the south of platform 1 to the slab laying area under the station canopy. 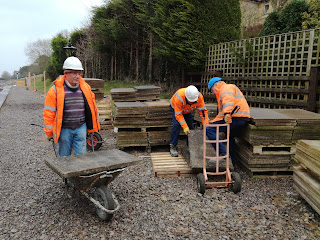 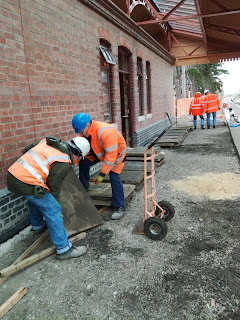 Terry & Rod trying the Slab Lifter, under the supervision of  contractor Roy. The Slab Lifter is battery operated & involves a pump creating a vacuum inside the suction pad on top of the slab. 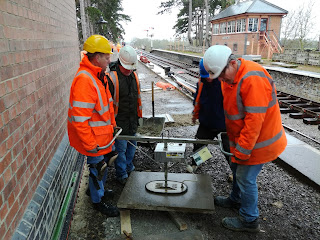 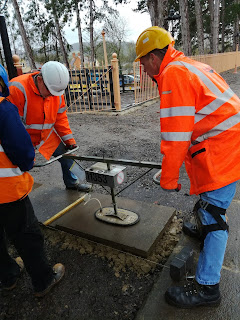 Roy (right of pic.) supervised several volunteers in the preparation of the bed & the laying & levelling of the slabs. Here we see Keith S having tuition. 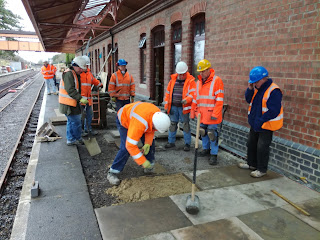 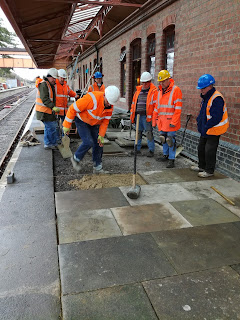 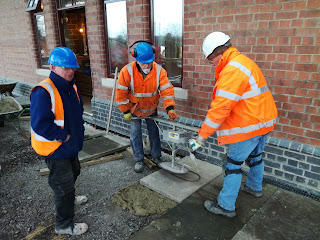 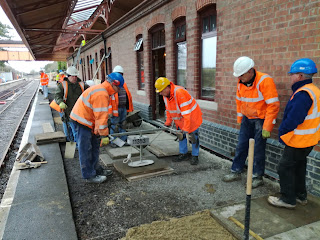 Some of the slabs obviously need trimming to size. A clever piece of kit was used to produce a nice straight edge. A length of  L section steel plus 2 G clamps were used. The L section (bottom right) is clamped across the slab to be cut and, after careful measuring, is used as a guide for the disc-cutter. Once a decent groove is cut the L section is removed for completion of the cut. Here John S is completing a cut. 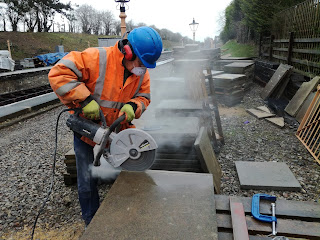 Poor Keith S, out in the rain producing another load of bedding mix for the slabs. 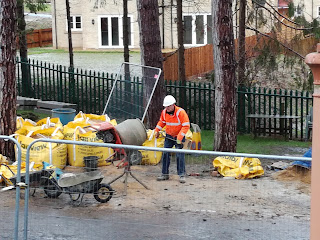 At the close of play we can see what Day 1 Slab Laying has achieved . 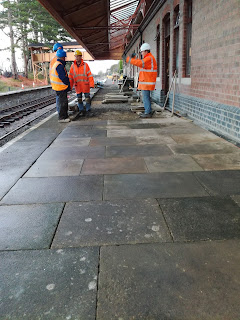 Through the day Viv & Ray worked on completing the fencing around the telephone box. 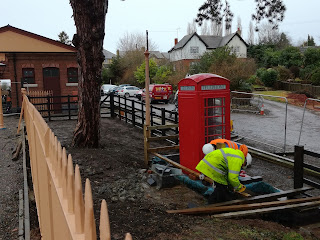 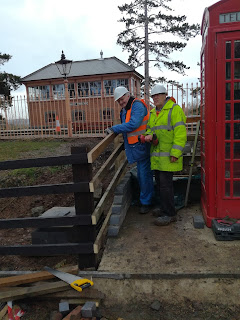 Neal needed to set up a submersible pump to extract a large amount of water that had collected in the hole, on platform 1, where the concrete footings for the bridge staircase need to be. 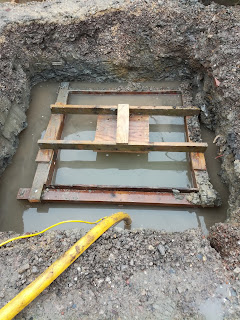 Trainspotting!
The Permanent Way train arrived twice during the day. The first trip was to drop ballast over the points, to the south of the Evesham road bridge. 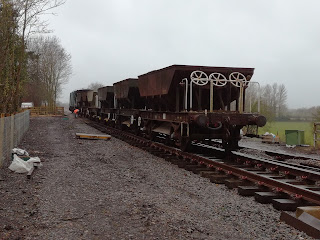 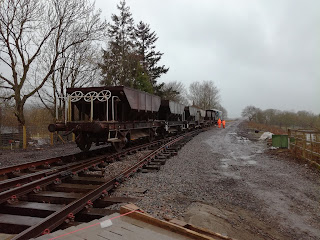 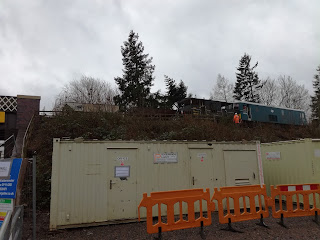 The second trip brought a load of ballast through platform 1 to the shunt head, north end of the railway. First pic shows a cautious approach, second & third shows electro-diesel driven by Neil Carr pushing the loaded Dogfish wagons through platform 1 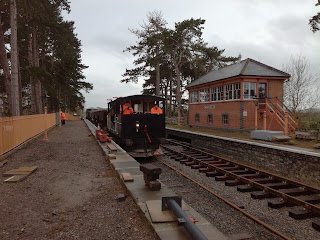 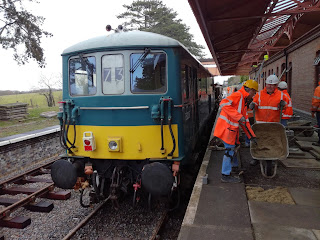 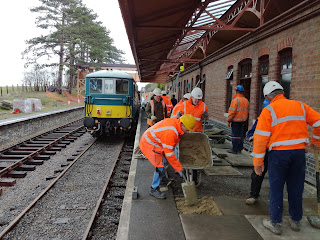 The Road Bridge:
Finally a few pictures of the bridge after the contractors have installed large Low Bridge signs to both sides and during the day dismantled their scaffolding. They hope to hand over the bridge on Friday, well ahead of schedule. Let's hope these new signs work! 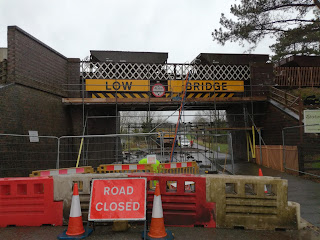 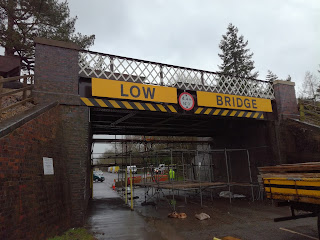 Paul Carter
Thanks Clive for title of this blog!