Brrr, it is a cold morning, with 15 volunteers turning up today. The main roads were a bit clearer thanks to the gritters, some of the side roads though had to be taken carefully.
There was a promise of heavy rain in the weather forecast for late morning so it was a case of getting as much done as possible before it got wet. 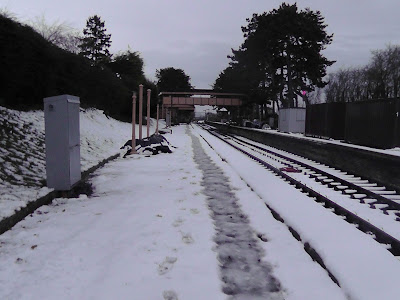 The Monday crew did a lot of walking up and down, as can be seen by the ice trail. Soon shovels were out to make the path safe, the platform edge was also cleared of snow.

The snow had caused some damage at the station. Several large branches had snapped under the weight of the snow and crashed down on Platform 2. Here in the photo below, the lamp post top came off worst, but fortunately, there was no damage to the lamp post. 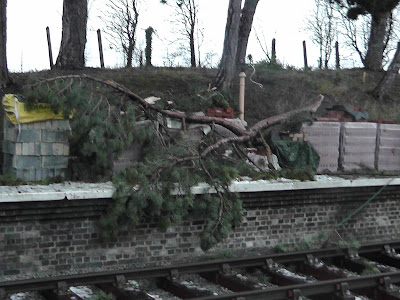 Vic, Mike and Chris cut all the timber into smaller pieces and transported them to the bonfire area, where later a fire was lit. The wood being a bit damp took a while for the fire to get going. 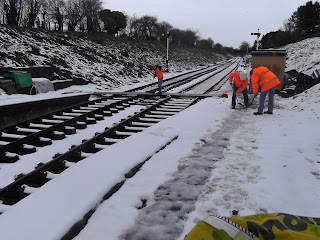 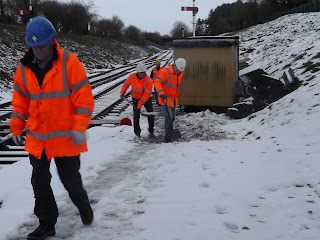 Shovels at the ready are Rod and Mike, chipping away the ice. Also clearing the reinstated crossing is Terry, giving it a sweep. (Is he Curling? I cannot see the stone?)

On Tuesday next it is expected that the station floors will be screeded so a clearance of all the rooms had to be done. Here Peter, Mike S, Dave H, Brian, Bob & Paul moved all the wall boards and other bits of apparatus from the rooms. 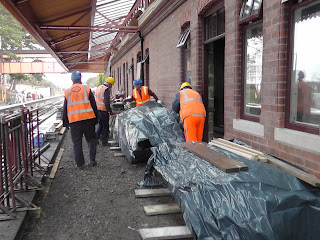 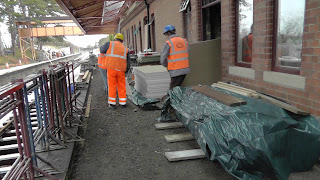 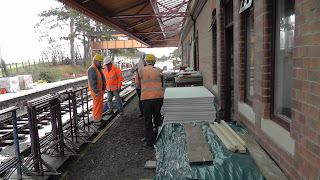 Two other areas being worked on today.

1) The security fence alongside the permissive footpath required supports. Tony organised a crew to fetch over extra panels for the supports and Vic attached the clamps to lock the panels in place. 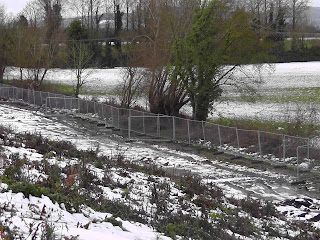 2) The driveway, where kerbing was being worked on by Rod and Terry. Photo to be taken next Saturday.

We had gas people in the station installing pipework, also the platform paving slab installer came and checked the slab quantity and did some measuring for the future.

Vic
Posted by David Holdsworth at 20:47