Fog, mist and low cloud was the weather forecast for today. Sixteen BAG volunteers at Broadway Station set about the various jobs required. This was to be our last working day before Christmas.

The busy 3 days consisted of Monday - the electrics being connected, Tuesday - screeding floors and Wednesday - various jobs (see below).

Western Power came in on Monday to feed in the cable and connect to the mains supply. We now have to wait for the installation of a meter and a further connection at the Station end. 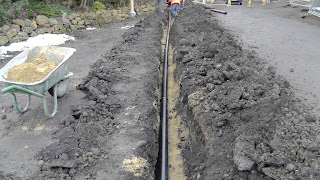 This photo is from Saturday. There was a large hole at the end of the trench, where the cable connection was to be made.

On Monday the trench and hole had been filled in 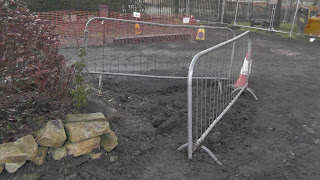 The 3 contractors to do the floor screeding arrived in their van and proceeded to unload their equipment. Whilst the 10 BAG volunteers sorted out shovels and barrows for the moving of mixture. 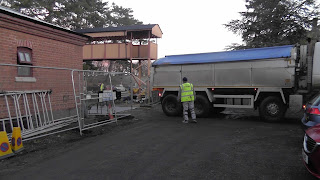 "Unload over there please!" 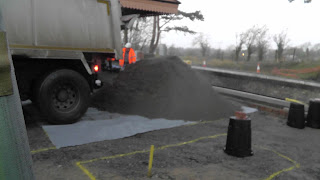 Is that all there is?


We soon had a convoy of barrows being filled mainly by Rod (the shovel), helped at various times by Dave B, Keith S and Vic. The screed laying started off in the nearest room and moved along the eight rooms as each one was finished. So first of all it was a short run for the barrow pushers but the run got longer as the morning wore on. 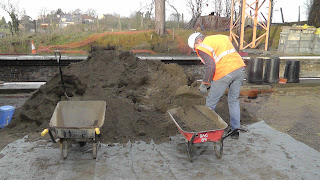 Rod filling the barrows. Is the heap getting smaller? 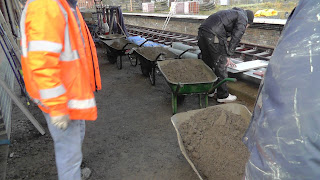 Barrows all lined up.


The visitor in the background is our tiler, inspecting the samples. 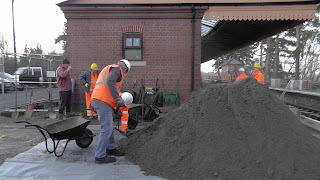 A cuppa before screeding the floor.

The Tea Room and Kitchen at the start of screed laying and then finished floors.

We did have a small amount of screed left from the big heap which was disposed of nearby.

We were fortunate to have Steve and his JCB on site. This meant that we could move the telephone box to its new position. 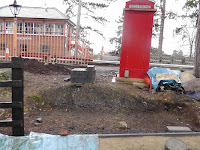 Telephone Box on the old site


The Box in its final position. 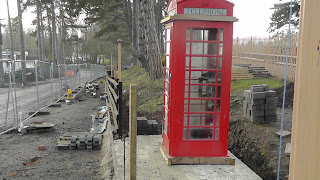 The Heras fencing, which collapsed a few weeks ago, was finally finished today, Wednesday. Vic with the help of his colleagues:- Tony, Peter Q, Paul, Dave H, Chris & David H, who carried over the panels. Vic then fitted the clamps to hold it all together. There are now eight supports at various positions along the fence. 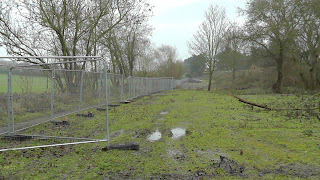 With the Telephone Box now in its position, the adding of 3 more posts by Rod and Terry could be positioned around the concrete base. 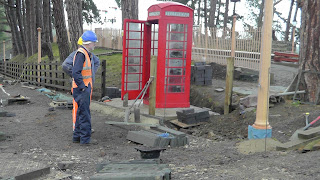 Here Mike and John B contemplating what's next. 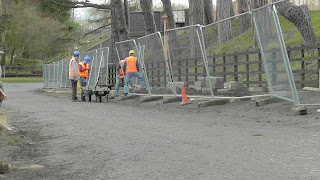 Terry and Rod went on to extend the kerbing up the drive, helped by Paul (the mixer), Vic and David H.

Many minds were contemplating "Have we got the right lines for the footpath and the fence?" Also how much more infill is needed? 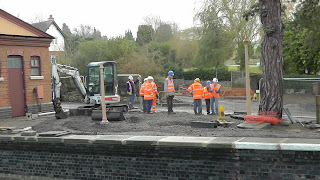 As we were waiting for the screed to harden, no access was permitted to the inside of the building, so preparation work was being planned for a future date.

Here is Mike S doing a bit of painting. Neal was preparing wall boards and up in the roof was Peter Q and John S fitting loft boards. 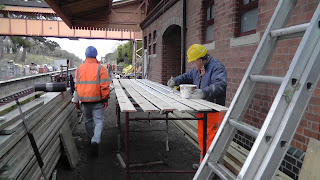 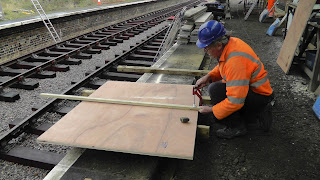 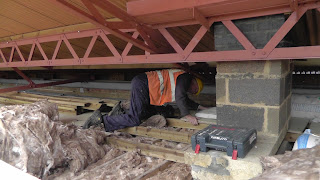 Posts for Running in Boards

The four posts for the modesty screen had been transferred to the Toddington end of the station and Jo came in to advise on their painting and installation. These are required for Platform 1 building south end and Platform 2 building north end. 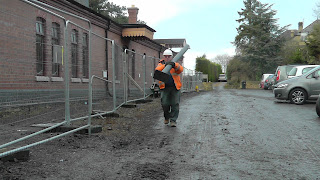 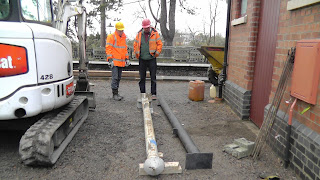 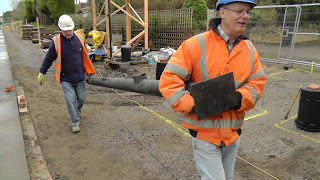 John C managed one on his own. Jo and Dave B inspect the differences. John S and Clive share the load.


We shall now be away over the Christmas and New Year period, but hopefully, the ballast drop will be carried out on Saturday, when the Turnout is connected to the Running Line through the Station. 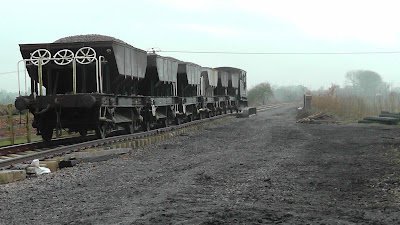 The ballast train waiting for connection and a loco. Which loco will it be???


From the Editor John S and blog writers Paul, Dave H and Vic may we wish all our readers a Happy Christmas and New Year celebrations as we enter 2018 and Broadway Station Grand Re-Opening!