It blew and blew all day but at least the rain that was forecast kept away, so most of the outside jobs could be carried on with.
We saw 22 windswept volunteers arrive today mostly with one mission in mind plus the usual ongoing jobs on the drive and around the Station building.

The main job of the day was the dismantling and the removal of the Broadway shed. A small gang started the task of hunt the screws which held the thing together. Some obvious and some hidden and some stubborn.


Outside Pete and Steve were lifting the roofing felt looking for the screws which held the roof down. 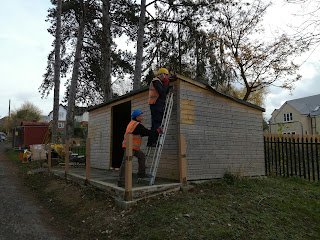 One by one they were taken away to an area just off platform 1 down by the storage containers. 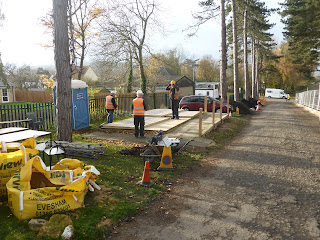 Slabs that surrounded the shed will be recycled, the better and suitable ones are going to be used on the platform, the others will be going into storage.

Then after the slabs had gone in came the big boys with their big toys.


Steve in the JCB made it look easy breaking up the concrete slab, Adam in the dumper took away the broken slab to the rubbish pile, anything useful, like hard core, was taken over to the infilling behind platform 1. At the end of the day the mini digger was removing the last of the debris, all signs of the shed having ever been there will have been removed.

Over on the other side of the drive the team led by Rod and Terry made progress erecting the fencing and edging slabs towards the Station Building.

By the end of the day.
Fencing installed up to the  manhole and edging slabs were not far behind. 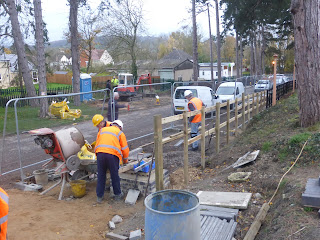 Only one painter today, Mike ( is it another man with a new coat? ) was on his own giving the window frames their first coat.


Apparently Graham was keeping a watchful eye on him via the cameras !!

Peter Q and Dave H re-fixed and re-sealed the previously removed guttering by the broken and replaced dagger boards. Dave H whilst there gave the boards a first coat of paint.

Inside the booking hall Neal has been working on the wood work.

A line of batons have been fitted around the room and the dado rail fitted above, below the openings a shelf / counter installed. More batons below will be fitted just above floor level and eventually tongue and groove boards will cover the lower part of the walls. The openings, which are the ticket windows, will have sliding hatches that will rise behind the wooden sheets. The design copied from existing stations still with having the original layout.

Elsewhere the plaster had skimmed the first of the toilets. 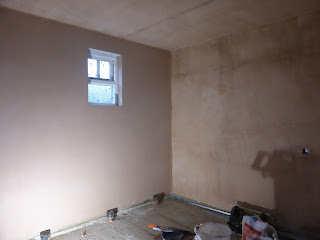 And finally .
The volunteer of the week goes to