Unless the volunteer was working inside the station building, it was a case of getting wet and muddy. There were only 12 volunteers on duty today, perhaps some of the others were watching the afternoon rugby or starting their Christmas shopping?

The plasterer came in today and continued with the Gents toilets. The ceiling was completed on Friday and now its the turn of the walls. 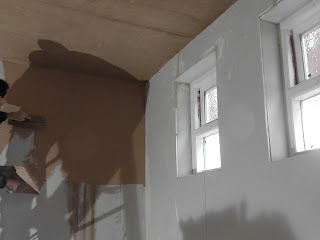 The two areas north & south of the station are nearly at their correct level with the infill. To help compress the material, we use a vibrating roller and mini digger.
Here, John C has first go at starting (give it kick John). "No I'll do it!" said Tony. So Tony demonstrates how to do it and off goes the roller (plus Tony) to the north end. 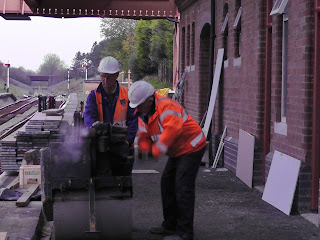 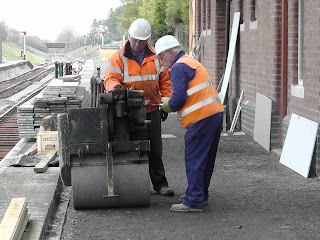 John finds an easier way to do the south end. He can sit in comfort, out of the rain and just go backwards and forwards. (Ah! This is the life!). 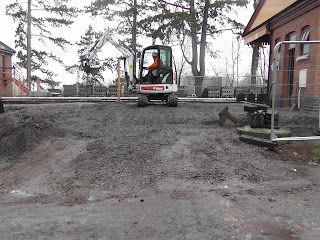 The kerb stones ready for the drive were situated on the wrong side, so Stuart, Peter K and Robin produced the muscle power. Using the lifting tackle they moved around 32 kerbs from one side of the drive to the other. (Sorry no picture of this).

After having their breakfast down the line, the P/Way team came into the station to further the track laying. This photo depicts sleepers ready to be laid onto the running line. The P/Way team were at lunch. (They always seem to be eating!) 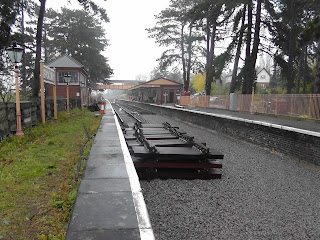 Well, they do a lot of hard graft in between meals! (Have to keep the inner man filled!).

The time had come, that we could recommence the wooden fence installation up along the drive, so Rod, Keith and Vic sorted out the correct posts to install, but first we had a 'Last Post' to remove. With the help of John C and mini digger, it was soon out if the way. 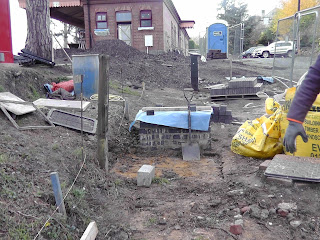 A few hours later some new posts had been installed, with steady progress towards the station building. 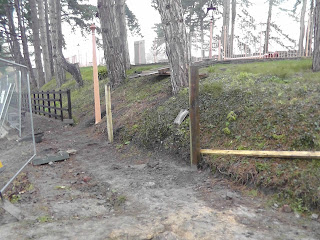 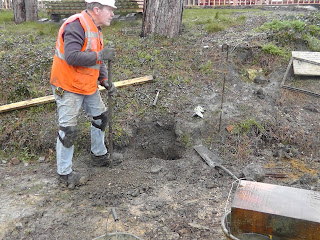 The ground here starts to rise, so longer posts are needed. It proved quite difficult for the post auger to penetrate the hard clay along with a few bricks and stones that were in the way.

Rod the auger operator was feeling quite tired by the end of the day.

John B, along with Stuart, removed the guttering from our old shop but on occasions chatted to the many visitors who came to see the progress of the station building. 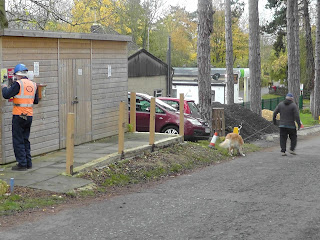 
At the entrance to our drive we have advisory signage for visitors. One post was not quite tall enough for viewing the notice, so an extension was required. This was Peter K's first job of the day, with the help of Stuart, to extend the post to the required height. 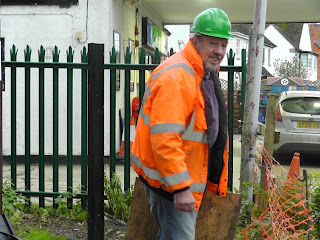 The next photo taken from the south end of Platform 1, shows how near the running line is to where the turnout will be installed. Not far now! 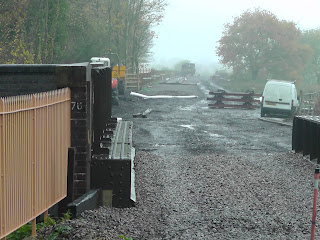 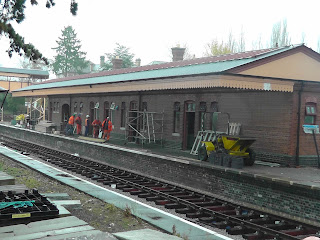 Here is a picture of the station building. The lads are looking at what's to add next. The windows are in. Could it be the doors? Yes, it could. During the afternoon Neal made a start on fitting the first of the doors, hence the interested group in the doorway. 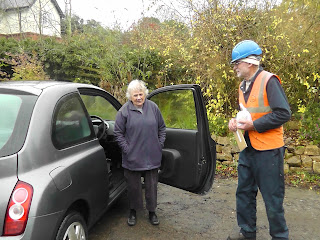 Anne, one of the ladies who helps with the running of the bric a brac shop, came in to renew her work permit (a requirement for all volunteers on the railway). Anne has also provided the shop with jam and other produce. (Mmm! Lovely plum jam!).

Vic.
Posted by David Holdsworth at 10:56