An overcast day which was neither cold or warm saw 25 volunteers turn out to carry on with ongoing jobs around the station and on platform 1. One of the main talking points was the Board's decision to have a cafe at Broadway (as per our volunteers vote). A small group of potential volunteers who would be willing to run or help in the running the cafe was slowly beginning to form. Ideas were being bandied around, so watch this space for further developments.

Firstly we had a visit from a team of Glaziers (not the owners of Manchester United as Mike said). 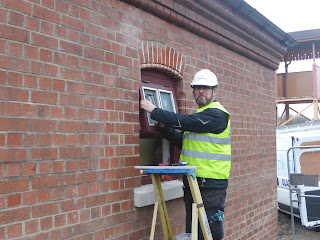 Here the first unit is being fitted on the car park side. By mid afternoon the whole of building had had its window units fitted, an excellent and speedy job. Another big tick on the construction of the station.


Photos showing both sides of the station building having been fitted with windows, doors next ?

The painters of Graham and the two Michael's were trying to paint the frames before the arrival of the glaziers but the glaziers were far too quick! 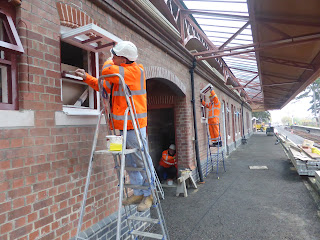 The team of Peter Q , Dave H and Brian were waiting for various items to be delivered before they could continue with their on going tasks.

So off they went to strip out the Broadway bric a brac shed of all its electrics and useful bits before it gets dismantled. 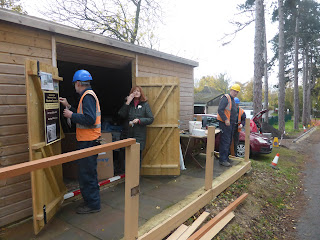 Julie has a tear in her eye as slowly but surely her shed and surroundings get dismantled before her very eyes. Pete and Brian removing the hand rail while John B removes some old notices off the door.

On the opposite side of the drive Bob and John S were increasing the height of the manholes.
Cement supplied as per usual by Paul.

Up on platform 1 the in filling and levelling was continuing at a pace.

A large team firstly put additional edging slabs in behind and higher than the existing. 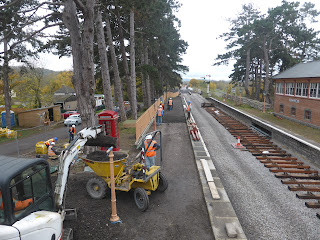 With John C in the mini digger feeding Rod on the dumper, spent ballast was taken along the platform where a small group was waiting to spread and level, slowly, they proceed towards the end of the spear fencing.

At the close of play after a few sessions with the various rollers and compactors this is how it looked. 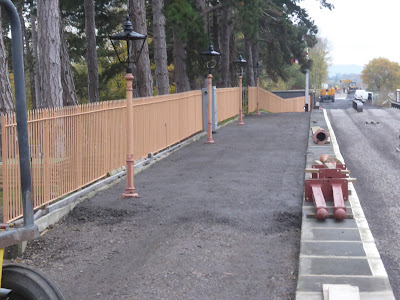 Some of you may have noticed on the Extension Blog pictures and some have mentioned that the daggerboards on the gable end looked to have been hit and have accidentally been broken.
Yes they had been accidentally be broken by the jib of the mini digger!
One of the items which Peter, Dave and Brian were waiting for was the arrival of a scaffolding tower which duly arrived mid morning .


After the guttering was removed the two broken dagger boards were cut out and new pieces cut and inserted, filler was applied and the boards then were primed. Guttering was re-fitted. Next time we're on site they will get a first coat and then a second. Hopefully nobody will notice.

Posted by David Holdsworth at 23:00