A dry day with light cloud followed by sunny intervals. Today we had 11 BAG volunteers, 2 glaziers and a visit from Mark, a team member involved with 'Wartime in the Cotswolds'. The 11 had a variety of jobs around the site, removing a wood post, sorting out an electrical cable and installing metal posts at the drive entrance. The glaziers were fitting the last of the glass panels on the roof, Mark was surveying the area to see what would be available at Broadway for the special event next April. 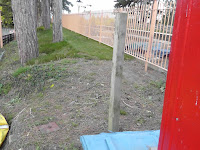 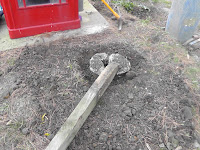 Vic took on the task of removing the post, which was part of the viewing stand we had here. It was well concreted in but with a bit of brute force Ron finally helped to pull it out.

I suppose I should have taken a selfie???

Our security cameras have been installed at various positions around the station. The redundant cable in the original position near the telephone box could now be removed. Robin, Ron and Keith started the operation, joined later by Phil. 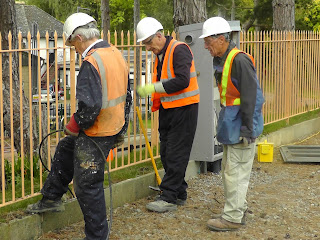 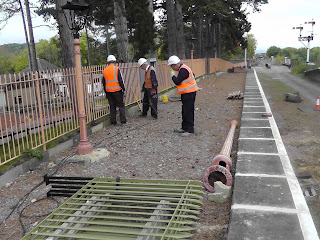 With this completed they then set to and moved the spear fencing, in the foreground, to the other side of the installed fence, getting ready for the next stage over the next couple of weeks. 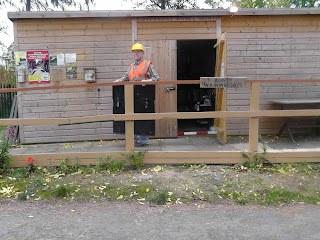 Stuart opened up the shop and put out the display boards for our visitors to read. He then joined Peter down at the entrance to the drive where installation of two metal posts would take place.

Here the posts are having their length adjusted to make it easier for installation. The holes had been excavated last Wednesday, so with a little more man power they were lifted in and concreted in place. 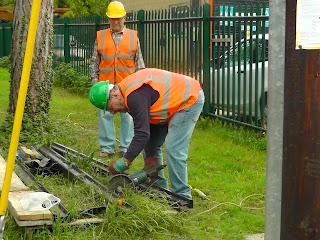 Mike, part of our painting team, was in today and applying paint to the gates which will be installed at the station. Later he had collected the tops of a lamp post for doing some homework. 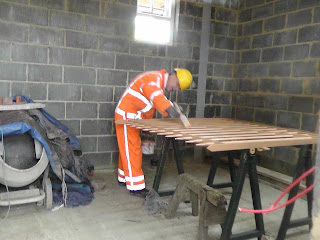 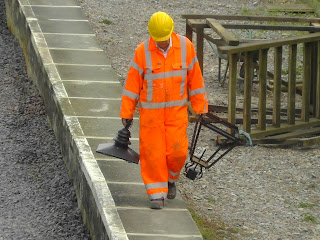 Here are some pictures of the roof before and after glazing. 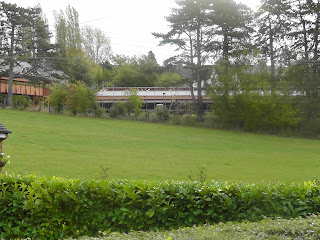 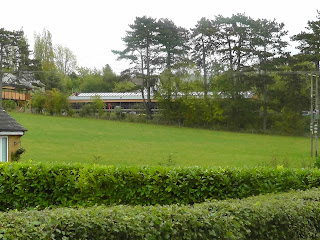 The station roof really looking good now with the glass installed. The gap at the end will have a temporary panel of corrugated fitted until we can extend the canopy towards footbridge steps. 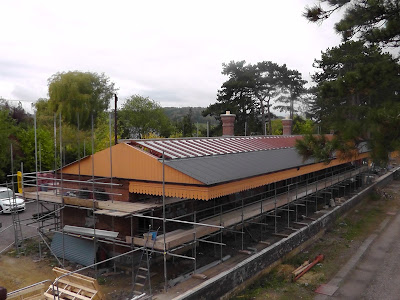 Looking to the future, John B posted in the mess room, a map showing what our line possibly could look like???? 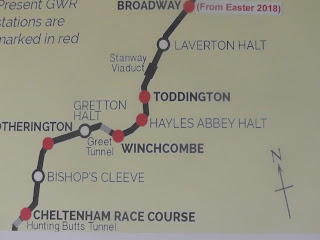 Correction to my Wednesday blog, Steve is to have a hernia op followed later by another visit to get his ankle sorted. That's the trouble with getting old, bits start go wrong! We wish you a speedy recovery.

Posted by David Holdsworth at 19:30