23 volunteers turned out today, it was a very grey and overcast day, the threat of rain as per some forecasts never appeared so onwards and upwards for some and downwards for others.

First to the painters, only two today but they seemed to be everywhere today. 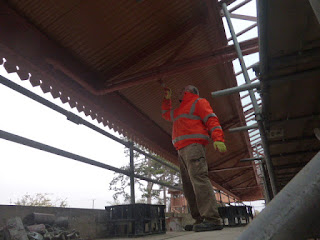 Mike was told that the previously installed down pipes from the fascia to the swan necks had to be painted light stone so off he went and painted both of them.
Then he joined the other Mike priming the wood that will be eventually be used for skirting boards. 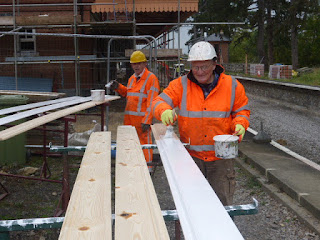 Then moving on to priming the internal window sills. 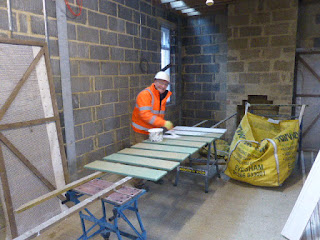 Just outside of the station building a small gang of Terry, Rod and Dave with Keith providing the mix and with the help of Adam on the mini digger started the task of slabbing the gap wall.

Terry and Rod seen in the first picture positioning the first slab and at the close of the day the platform edge is complete. Bob had been following behind them pointing up the gaps between and below. They even had time to replace a previously broken slab.
In the second picture behind Neal and Terry a shuttering box has now been placed, this is where the last lamp post on Platform 1 will be installed, the height of the infill is at the correct level so that in the near future ducting can be installed to the nearest power box then the level will increased to just below the platform .

Up on the roof Neal and John S carried on with the sheeting of the station roof. 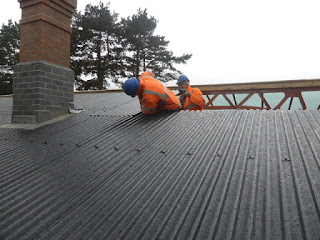 Starting just after the northern chimney, which had had its flashing completed by John C, they soon got into the flow and by the end of the day they had finished the car park side .


That`s all the sheets now fitted and the roof finished bar a bit of flashing on the ridge. The building is virtually dry inside now except for the windows and doors! 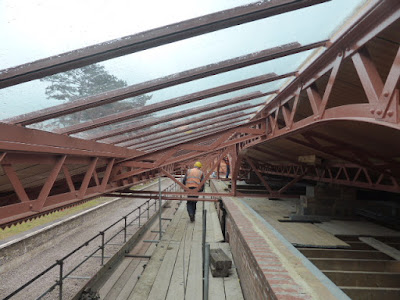 Just a shot of how dry the scaffolding is now and the glazed panels that had been fitted last week.

Elsewhere around the site Pete fitted some noggins between the joists after he and Dave H had modified a fence panel. Clive helped the fencing contractor for the morning. Dave H and Brian made a collar for the telephone kiosk. Vic and Keith did a spot of backfilling behind the drive way kerb stones.
And Julie and Steve continued the clearing out of the bric a brac hut to help with its eventual move up onto the platform.

And finally a picture of the station building from the drive side. 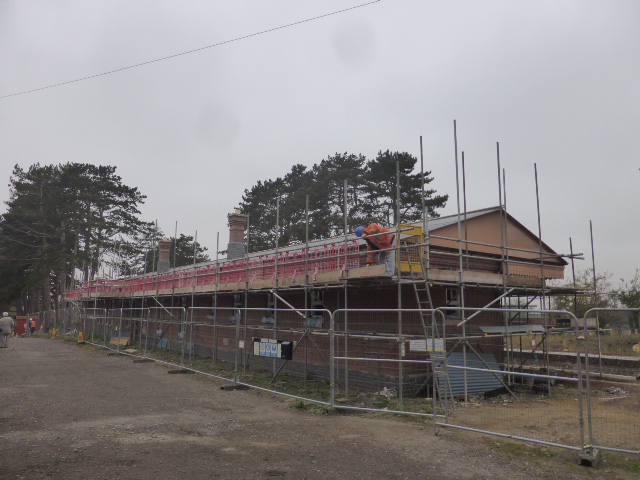 Posted by David Holdsworth at 22:50