It's a piece of cake

Saturday 7th October
It was a reasonably dry day for the eleven volunteers at Broadway today, there were three involved up on the roof and the rest at ground level. 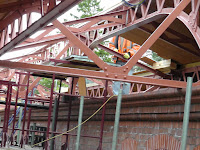 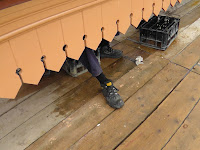 I think these volunteers were a little shy, 2 pairs of legs.

It's Peter Q underneath the arches and John S looking for his next panel. 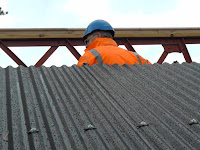 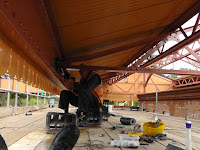 It was a clean sweep, for John B with a broom and Vic with the lawn mower, John removing all the pine needles falling from the trees and Vic with his new mower cut the growth, along the village side of the driveway. 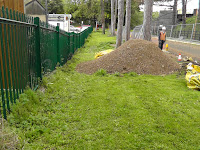 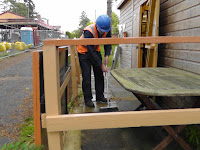 
Keith S, Robin & Peter K were involved with clearing the ground and checking with the theodolite that everything was at the correct level. 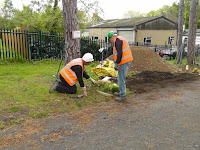 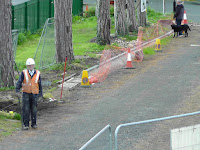 Robin on his own, the other two had gone to fetch the theodolite. 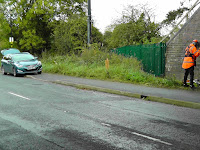 John from the Publicity Dept was putting out notices for the forth coming Cotswold Food & Drink Fayre. 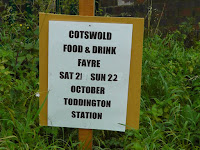 Lynda & John were chatting to a couple who had come over from Caravan Club site to view the progress of the station rebuild. 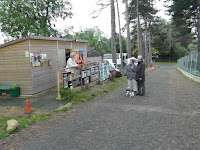 Keith G was the cutter operator today with the plan to cut the overgrowth on the Malvern side of Station Road bridge. Vic acted as his second pair of eyes, protecting passing pedestrians and Keith when on the Evesham Road from the passing traffic. 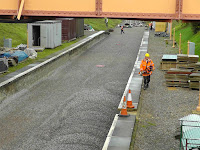 Keith on his way all kitted out.
The area that had to be cleared. 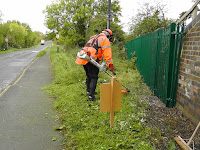 Having been involved at other parts of the railway, today saw the P/way team back at Broadway. Their erstwhile blog reporter Jo (pic 1) was making his way down to the work area and the rest of the team (pic 2) were waiting for more concrete sleepers to arrive, brought up by Steve on the JCB. 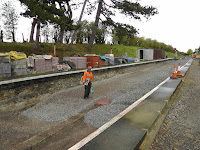 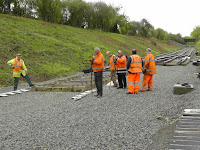 We welcomed back one our volunteers Roger J, who had been poorly, now looking reasonably fit but having to take care on what activity he could do. 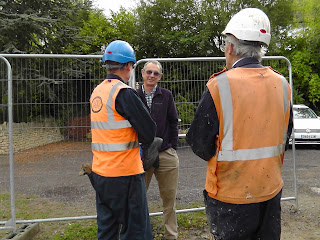 Here Roger being welcomed back by John B and Robin. 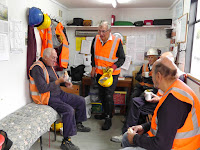 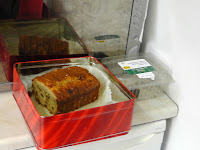 We do not have the facilities that the P/Way have. No gourmet meals for us, but we did have a treat from Mrs S in a lovely piece of cake. (Scrumptious).

Posted by David Holdsworth at 23:26