Wed 4th October had 22 volunteers on site with weather chilly but dry. Who forgot to take their camera? Thanks to Dave H for all the photos.

It is the last month of regular trains running, with November being a closed month before Santa trains in December. It is still "all go" at Broadway as we get the station ready for opening in 2018.

Here is Mike T, Ray & Mike S applying coats of paint to the dagger boards and other bits on the roof.

Neal & John S were also working up on the roof fitting small pieces of corrugated around the south chimney while Peter and Dave were fitting down pipes to the guttering at the rear of the fascia board panels.

John S trying out the entrance/exit from the ticket hall, it will be easier when the scaffolding is down.

Is it Nov 5th? No just burning old bits of timber as the tidy up all around the station continues. Martin & Clive keeping up wind. The bonfire was on the site of the platform 2 waiting room so that the trackbed doesn't get dirty from the ash.


Brian M was on his own today tackling this task, using the chain saw to finish off cutting the over growth of trees & shrubs along the Malvern side of the cutting. 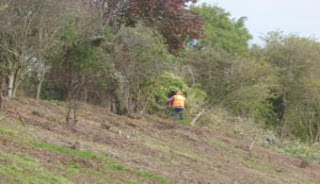 
A team of 8 on this job, Paul on the cement mixer, Keith on the wheel barrow along with Vic. Rod & Terry the joint team leaders setting out the kerb stones. Dave B, Ron, David & Vic all worked with shovels clearing the ground where the kerbs are to be set. Rod even got the dumper involved bringing spent ballast to reinforce the edging.

Rod & Terry (left) with the dumper.
(Right) Receiving advice from Graham whom we sometimes see in his double decker London bus.


Tony led a small team in levelling the ground with rubble from where the transport entrance to the trackbed used to be. 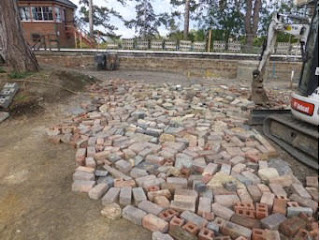 Also on site today, doing a variety of jobs, was Chris, Keith G, John B, in the shop Julie & Steve.