End of the Month

There were 14 volunteers on site today. The weather was mixed with some very light showers but mainly dry so did not interfere with the work going on. 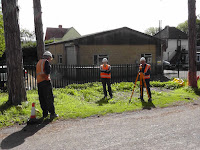 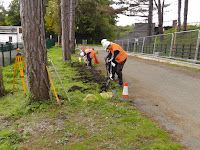 The kerbing crew of Keith, Phil, Robin & Vic started at the bottom of the drive to tidy up the ground around the drainage and cover the pipework with concrete for protection. Then using the theodolite measured out the next stage for ground clearance where the next set of kerbs will be placed on Wednesday. 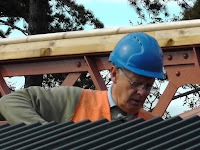 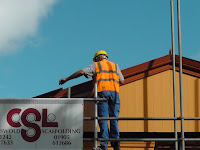 Up on the Roof


Working on the roof today was Neal finishing off some trimming on the end, John S getting another roof panel for putting on the top 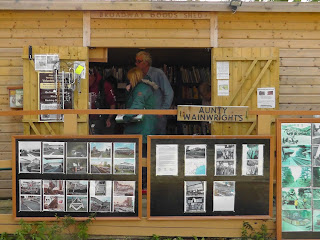 The bric-a-brac shop today was looked after by Lynda and there were quite a few visitors who viewed how the station building was progressing then had browse for any goodies. 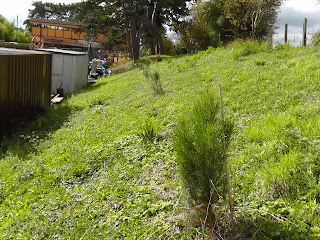 A few years ago some trees around the site had to be removed and along the Malvern side of the station Jo planted some replacements, using seeds from the original trees, and a few can be seen here doing reasonably well in their growth. 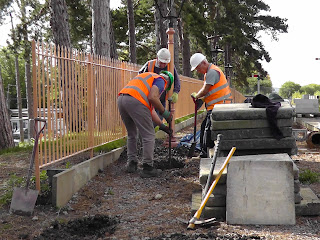 Tony, Clive, Peter & John C with the help of  Steve with his JCB started levelling the ground behind the wall with old ballast that had been collected for this purpose. With a big digger outside and a little digger on the inside it was soon ready for Clive to operate the roller to flatten it all down. Here are Tony, Clive & Peter making a start on locating the electrical conduit from the lamp post, later joined by John C also having a go with the shovel. Have we gone deep enough I'm sure it is here somewhere?

Vic had a new mower to play around with today and cut the grass behind the spear fencing and over the picnic area,

John B & Stuart busied themselves tidying up around the station.