The day started overcast and we had an odd shower but in the end it was quiet a pleasant day for the 18 of us who turned out today, a bit low on numbers as it must still be holiday season for most.

A photo from the one of the previous days work, shows that the all the shuttering from both chimneys has now been removed. 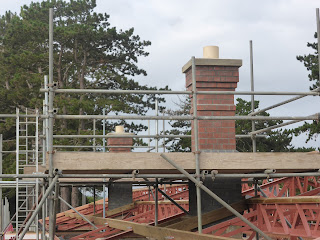 Soon the scaffolding will be removed from around the chimneys to allow for the commencement of the installation of the roof sheeting.

Talking of roof sheets, today we saw them finally delivered.

Luckily Steve and his trusty "JCB" was close by to help with the unloading or we could have been in for a long day ! 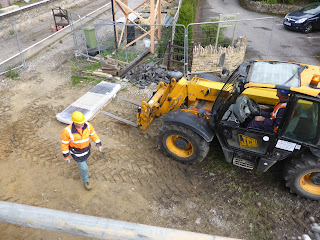 Later the Telehandler arrived and placed the first pile onto the top of the scaffolding in the anticipation of start soon.

Before that can be commenced the guttering has to be fitted,plus the woodwork needs yet more second and top coats 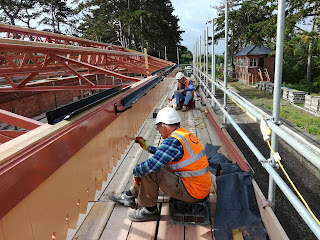 Mike and Graham giving the dagger boards another coat and above their heads Neal has been installing the brackets to hold the guttering. 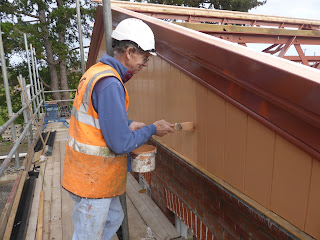 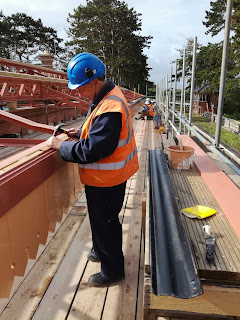 Before the sheets go on Brian also went around the both sides of the roof structure fitting an angled wedge of wood to help with sitting of the sheets not on an edge, but on a more flatter surface.

The arrival of more tongue and grooved wood meant the carpentry team of Peter Q, Dave H and Brian T could start the construction and fitting of the remaining dagger boards on the platform side. Below Pete is seen cutting the drip slots in the last 9 dagger boards. 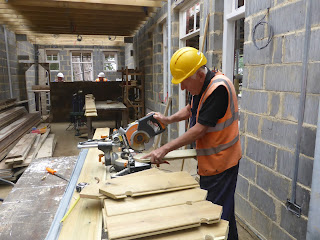 As we approached the corner a bit of fine adjustment for the corner boards to make sure they will look right, after a bit of head scratching the first of the northern dagger boards has been fitted, we are now ready to start and complete the temporary north gable end. We have now gone round the Bend !!

Down the bottom of the drive Rod, Ron and Vic completed the previously started drainage troughs.

Vic is digging the trench for the pipe from the end of the trough, and then Rod created a suitable hole for it in the manhole, afterward everything was sealed with liberal amounts of concrete .Ron in the second photo has the job of diverting the BT cable duct over the drainage pipe. 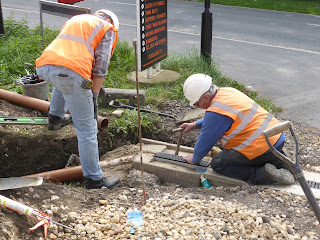 Later John C assisted, putting the final lid on the trough, then more concrete was applied to hold everything in place.

Elsewhere around the site . 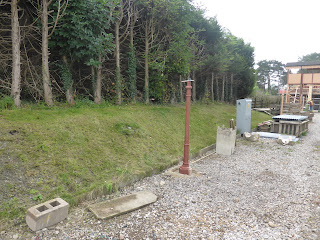 Previous working days saw the last of the GWR style lamps erected on platform 1, this position was were the carpenters temporary hut was.
They have now found a new home in the semi dry in what will be the canteen .


Pat and Brian continued the never ending task of cutting back the vegetation on the embankments. 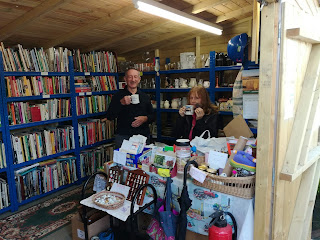 Julie and Steve were present in the shop with a steady stream of visitors.


Talking of visitors, can we thank Paul who visited our station today and brought us all a selection doughnuts. Paul is a regular Blog watcher, and comments on our progress and is an occasional visitor to our railway when time allows. 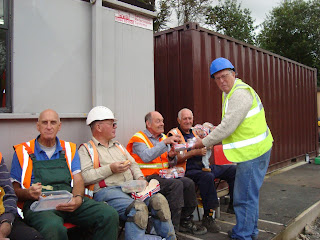 By the look of his face Paul "volunteer" is extremely happy to accept a doughnut of our visitor Paul.

And finally a view from the partly completed switch back to the station, in the distance Steve has been removing and leveling old ballast up to and around the end of the platforms . 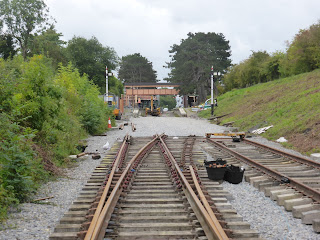 The new ballast had been laid up to our mess huts, are they finally going to start between the platforms soon?

Posted by David Holdsworth at 11:55