Putting a Lid on it!

A small band of volunteers were on site on Monday, the carpentry team of Peter, Dave and Brian completed half of the gable northern end. Whilst Neal and John S made a start on the roofing sheets on the platform side.

Firstly we had during the morning a visit from the scaffolders, their job was to remove the scaffolding from around both of the chimneys. 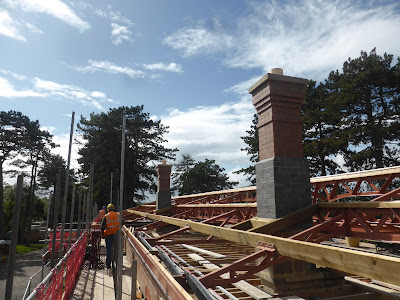 Here now is a view of the two chimneys in all their glory.This side of roof will be ready for its sheets once the guttering has been completed.

As I previously mentioned the carpentry team was on site on Monday and they completed the daggerboarding of the gable end, only half being done at the moment as eventually it will repositioned when the canopy is extended towards the bridge stairs.The other half of the gable will have a temporary water proof marine ply cover attached to give this end a weatherproof seal.

The below pictures shows the first sheet installed and at the end of the day the total fitted. Once Neal and John got into the swing of things they seemed to go up quite fast.
Neal lining up the first of the sheets


Today saw 18 volunteers turn out for the work which mainly concentrated on or around the station building, weather was changeable mostly sunny but with one downpour around lunch time.

Firstly to the gable end which on Monday saw one half completed, today it was the turn of the other half! 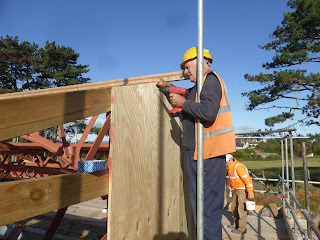 Temporary sheets of marine ply were cut and fix by Peter and Dave, when the canopy eventually gets extended towards the bridge staircase these will be removed and something more permanent will be constructed. Almost right behind us all the day were the painters of Graham and Mike, no sooner were the sheets erected than -

they were painted, first with primer then the first under coat. Most of the day at this end of the building there was an overwhelming smell of wet paint! But even with just the first coat it is now looking quite smart.

Over by container 3 the other Mike continued applying the primer to the many station doors. 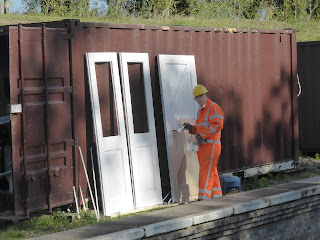 After the gable end had been finished the carpentry team moved on to fitting a another piece of detail which is situated below the guttering . 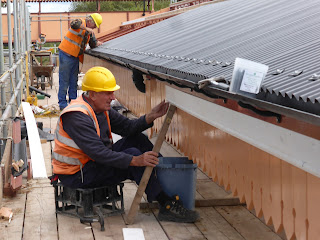 Pete seen here wedging the board against the guttering board before being nailed into place. Within the hour Graham had started at the far end giving these boards their first coat of light stone.

But the highlight of the day was the rapid fixing (when they finally got going) and of the finishing of the installation of the roofing sheets on the platform side. Above seen behind Peter is Neal drilling fixing holes for the sheets. Neal and John had started the day this side of where the down pipe is seen going through the dagger boards.

Below a composed picture of the last of the fixings going in on the last sheet , a small group stayed on to watch the final moments . 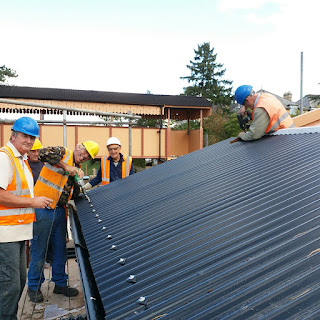 Considering they only started on Monday, they have made excellent progress.The top section of the roof will eventually be glazed in the not so distant future.

As this was going on more roofing sheets were being sorted in to a pile of long sheets and short sheets.They should be lifted by the Tele Handler maybe on Saturday, onto the car park side scaffolding, ready to be started next week. 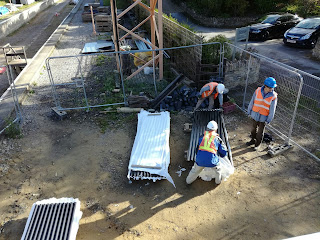 Elsewhere around the building Dave H was getting the guttering brackets fitted and guttering ready to be fitted on the car park side.

Down on the track bed Ron, Chris and Dave sorted through surplus bricks etc. and removed them to a storage area. Useful stuff!
Elsewhere Brian and Pat were destroying vegetation on the cuttings as per norm and Vic took a turn in the shop in Julie and Steve's absence .

If anybody is interested, or asks, we put up a total of 251 dagger boards on the front of the station !!

Posted by David Holdsworth at 20:59