They Said It Wouldn't Last

Twentyfour volunteers signed in for a day which started by giving us three hours plus of light rain, but brightened up considerably to provide a very pleasant afternoon.

The Painters
On Saturday 26th Graham organised several volunteers on painting duties and much was accomplished, with the canopy dagger-boards & valance getting a top coat and the gable end getting also getting the two-tone top coat treatment. The following pictures, taken today, should please the "armchair sceptics".
The morning in the rain 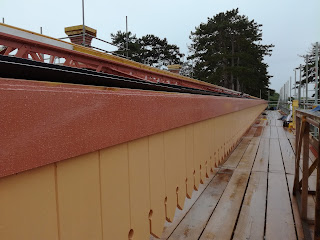 The afternoon in the sunshine 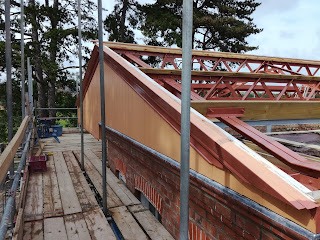 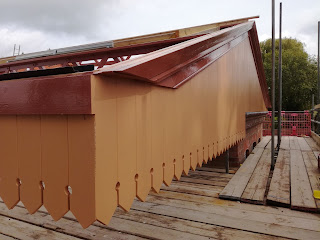 Once the weather improved, Graham was up there putting a top coat on the small entrance canopy. 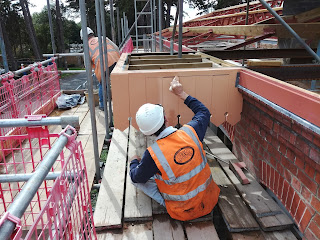 The Wreckers
As part of the ongoing clearance of platform 1, the carpenters' shelter, so useful over the past year or so, now needed to be removed. Peter Q, Dave H & Brian T will temporarily use the restaurant area   for any undercover work left to do.
They said it wouldn't last. Well Dave & Peter it did stand up well - until now! 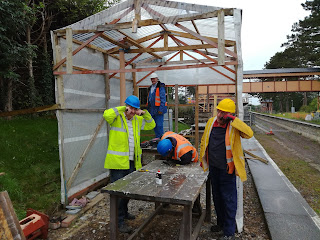 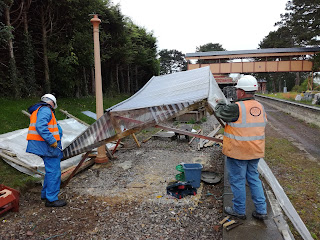 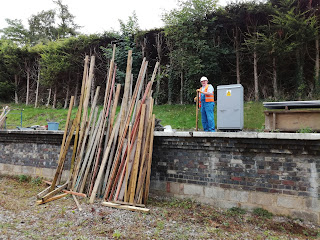 The Builders
Once the weather cleared up, John S & Bob W finished moulding the caps to both chimneys. A
special concrete mix was prepared and delivered by Tony B, Clive & Paul.
John S & Bob W carefully fill the shuttering with another bucket of special. Chimney 1. 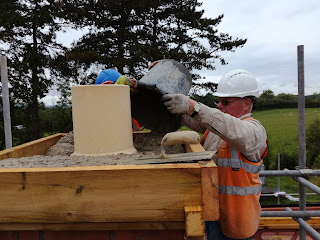 Bob smoothing off the cap on chimney 2, with a wet trowel 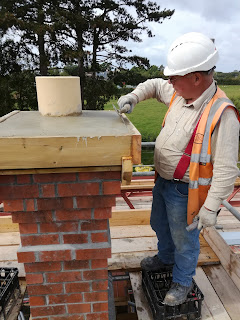 The shuttering for the chimney caps will soon be removed, and then scaffolding around the chimneys can be taken down. 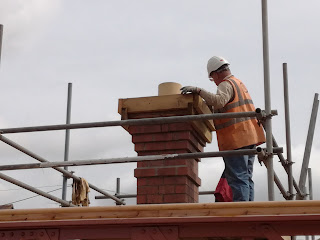 The Brush Cutters
Brian M on the upside embankment and Pat on the downside, behind the messroom, continued the hard graft of cutting back vegetation. 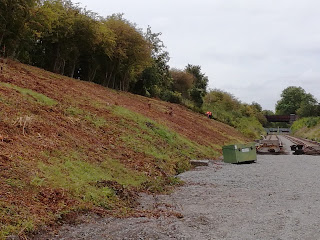 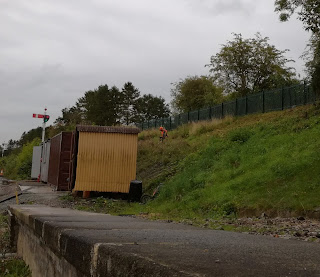 The Driveway Crew
Terry & Rod continued with the construction of the drain across the entrance to the station driveway. Concrete was supplied by Tony B & Mike T.

In the morning sections of grating were fitted to the finished first half of the drain. You can see the shallow layers of sacrificial concrete each side of the drain, to protect the top edge until the drive is tarmacked. It will then be taken away to allow flush tarmacking to the top edges of the drain. 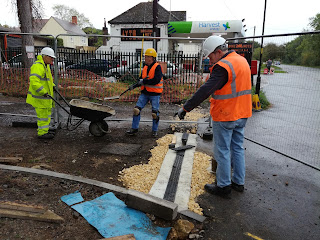 Terry and Rod digging a channel to receive the remaining sections of drain troughs. 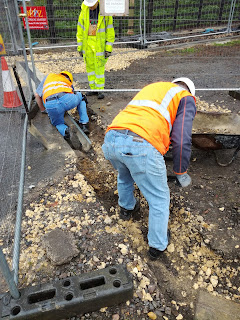 By the end of play the concreting in of the remaining sections was accomplished. Terry & Rod are deep in thought over the next stage - the linking up process. 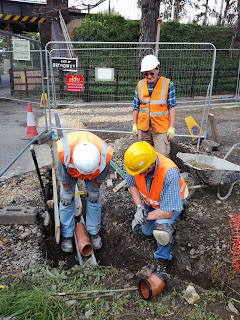 Finally, Julie and Steve looked after the shop, but had a rather quiet day trade-wise.