It was quiet a pleasant day weather wise at Broadway today, 19 volunteers turned up to carry on with the ongoing tasks, mostly on the station roof.

After last weeks successful installation of the roof sheets on the platform side people were now looking forward to see how much if any of the roof had been started on the car park side. 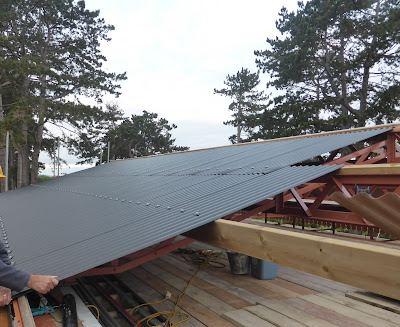 This is what Neal and John S had achieved on the previous day's work. Two rows of about thirteen sheets almost to the first chimney. They were soon on the go and eventually by mid day they had reached the chimney and gone half way around it. Now it gets complicated! Each of the chimney's will soon need waterproof flashing installed around them, to put the sheets on the other side of the chimney now would prevent the flashing being fixed and our  " Expert at Flashing " is away on holiday! Sheeting installation now grinds to halt (temporarily)! 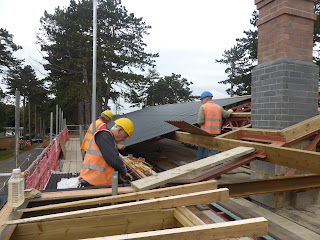 Pete  (above in the foreground) and Dave H continued to try and keep ahead of the roofing sheets with installation and final fixing of the guttering. By the end of the day everything except 2 off running outlets and their nearest guttering had been completed. 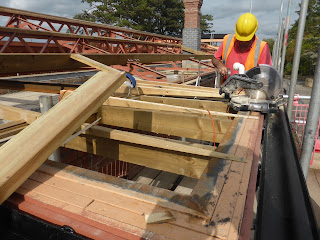 No sheeting to be done Neal moved on to the roof of the entrance canopy. The tapered wood will eventually be covered with plywood and then sheeted over as per roof.

Elsewhere around the roof structure and eventually everywhere else "The Painters" were doing there thing! 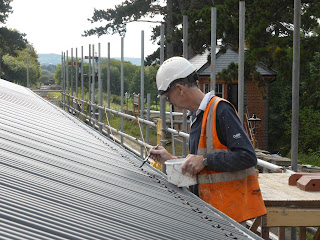 Earlier Mike and Graham 2nd coated parts of the gable end and dagger boards and later Graham blacked out the silver screw heads on the platform side. In the mean time.

Graham painted a lamp post, Mike painted a running in post or two and they both painted spear fencing.

Leaving Ray to prime some station doors and then some detail strips . 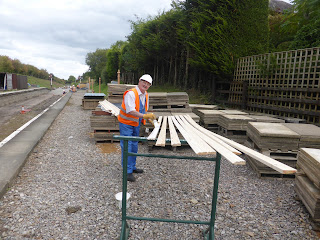 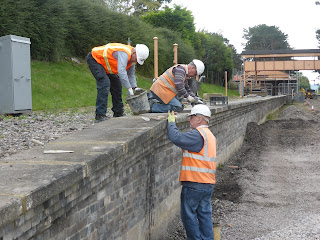 Bob, Clive and Paul moved outside to fill the gaps between edging slabs in the various places that needed some attention.

Tidying up of the track bed continued, today it was Ron, Keith, Martin and Dave's turn do a bit of sorting and shifting, also placed on pallets were a number of blue bricks required for the use of Building & Services Dept. 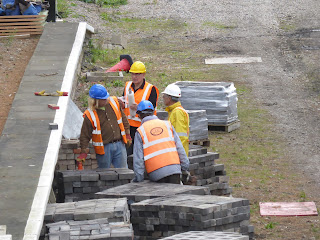 Only Brian on the vegetation clearance today, he is now a distant figure maybe just two or three sessions from the Springfield Road bridge . 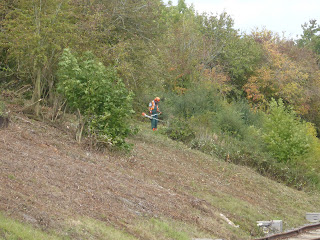 Below are two pictures taken from the footbridge, one of the Station and the other the progress of the track coming south.

And finally a shot from my previous week's position by the far signal. 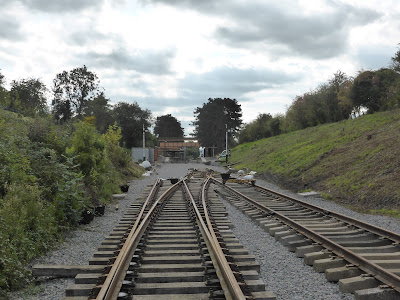 Switch work has moved on, Steve with his JCB has started to scrape off a few inches of old ballast between the platforms starting on platform 2 side. The used ballast has been heaped and some has been placed on both of the platform ramps to level them off. Some will also go to filling the gap at the south end of the building. New ballast is due in the next 2 weeks, slowly the gap between the platforms will be filled.

Posted by David Holdsworth at 09:15