9 volunteers in on Saturday. It was a clear up day today. Packing bricks, etc for dispatching to Winchcombe. John S & Neil C were up on the roof finishing a bit more on the guttering. 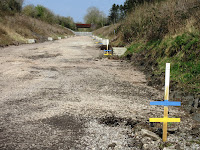 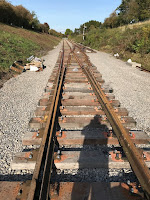 Trackbed before & after, north of the station platforms

It was a cloudy day but nice and dry, with 25 volunteers in today. It seemed to be a digging day, trenches for curbs, looking for pipes and removing weeds from around the site. There were a few working up on the station roof, finishing off the woodwork around the guttering and painting. 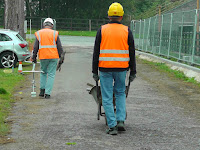 Rod & Terry off to work down the driveway. 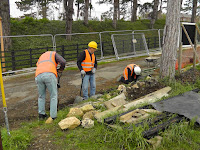 Joined by Keith, Dave & Vic and set about digging a trench for another 8 curb stones. 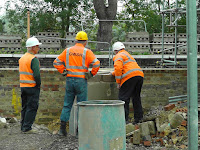 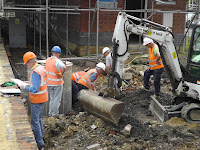 Tony, Dave B & John C deliberating over the recently installed concrete chamber. The chamber was put in on Monday and has been built there to allow access to the ducting between signal box and station building.

They were joined by Gordon, Ron & John S looking for a surface water drainage pipe. The pipe had been damaged when the ground was excavated for the chamber and the damaged section needed to be replaced before the ground behind the platform wall could be built up. This is expected to start next week. 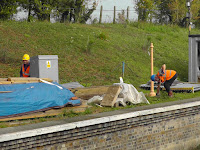 The two Chris's, Dave B, Gordon  & Martin were having a weeding and general tidying up session on platform 2. 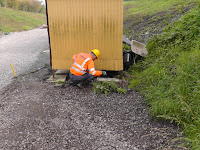 On the roof were Dave H & Mike, Clive, Bob & Keith
In the first photo Dave is fitting a recently altered daggerboard to fit around the down pipe from a running outlet. It has been decided to install two additional downpipes along the front of the canopy because of the size of the roof and the amount of water likely to run off. Mike is patiently waiting to apply the first coat of paint! 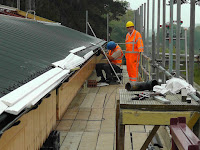 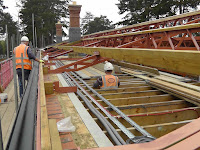 Clive, acting as the bagman, and Bob are laying a course of bricks along the top of the dividing walls. The extra course is to take the wall height well above the bottom of the joists as before they were both at a similar level. 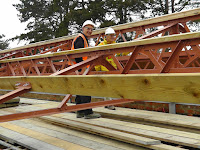 Also working on the roof were Keith and Ron, in between helping out on elsewhere on site they repositioned some scaffold boards and Neal and John were able to fit a few more roof sheets around the chimney before the rain came and stopped play for the day.


Brian M was with Pat working yet again on clearing the embankments. This has been a mammoth task but it has made such a difference, Brian is now within sight of the boundary fence. 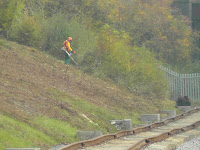 Paul who had been cement mixing found it was time for a cup his customary tea. 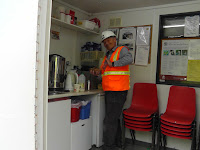 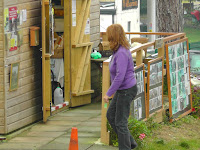 Posted by David Holdsworth at 08:58