The Troops Rallied to the Call

First a brief resume of the efforts on Monday 21st.

11 volunteers signed in to continue the good works.

Bob W finished the brickwork for chimney 2, the false one. Paul cut a few bricks for him. 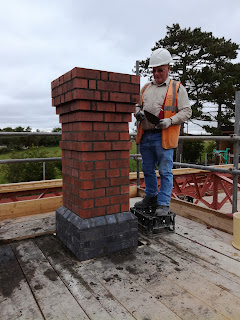 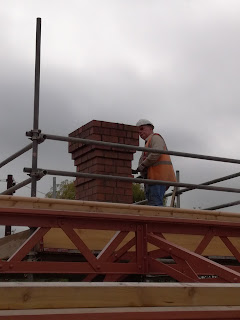 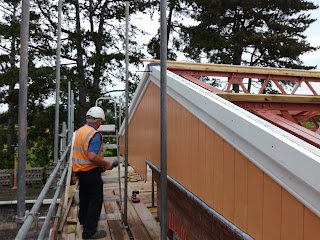 Neil C finished assembly of the framework for the northern gable end. 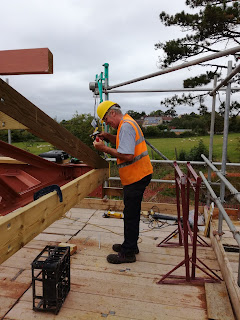 John S laid the penultimate row of corbelling in the gap & Tony backed up. 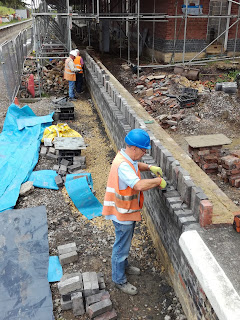 Last but not least, Brian M soldiered on for 4 solid hours to clear more undergrowth from the upside embankment, towards the northern end of our site.

A marvellous turnout, with 26 volunteers signing in today. The day started with 2 hours of murky conditions but these were soon forgotten and it became very pleasant & conducive for the many tasks that were set. 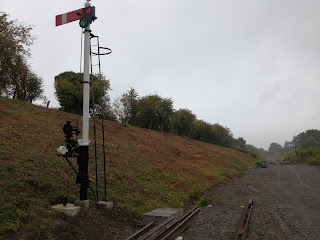 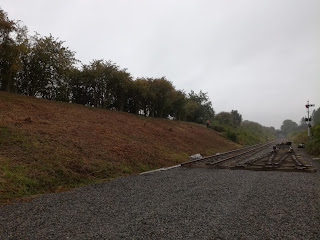 Mike T is adding undercoat to the rear of the canopy dagger boards. 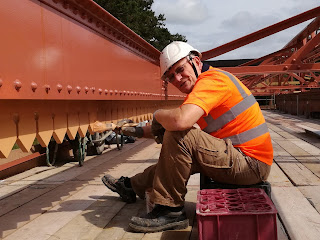 Mike S is applying top coat to some of the canopy steelwork. 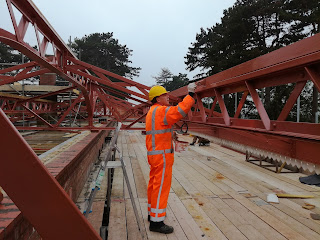 Boss Graham is top-coating the valancing over the canopy dagger boards.
You can see the pieces of cast iron guttering resting behind, ready to be attached to the valancing. 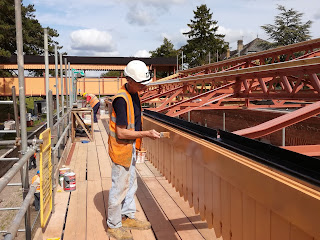 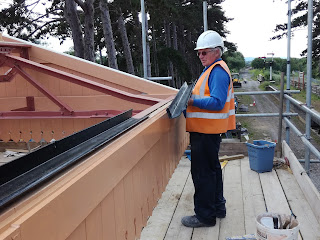 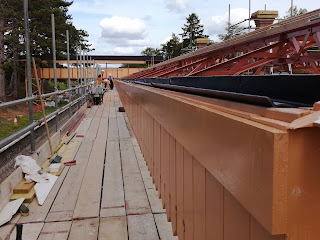 John C had, earlier in the day, cut & assembled the verging to the top edge of the Southern gable end. This in turn was primed & later undercoated. Finished article looks good! 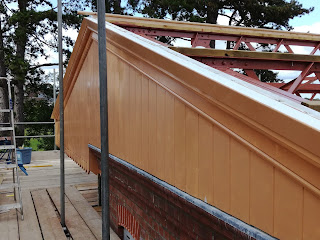 I must not forget Ray, who is seen undercoating several boards in the murk of the first 2 working hours. Later, Ray was later up on the scaffolding applying primer to the verging pieces, mentioned above. 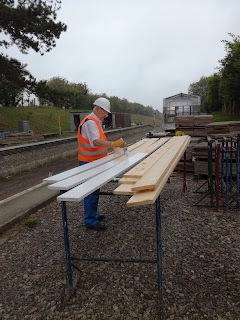 Hooray! the brickwork to fill the gap in platform 1 was finished. John S & Bob W finished the top row of corbelling whilst Tony & Clive finished the backing. Paul, when not taking photos or drinking the occasional coffee, supplied the mortar. 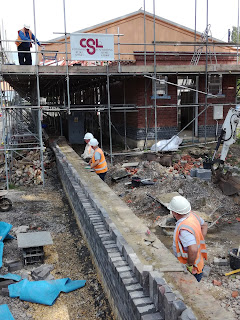 Peter Q shows us where the chimney pot will sit, as if we didn't know! 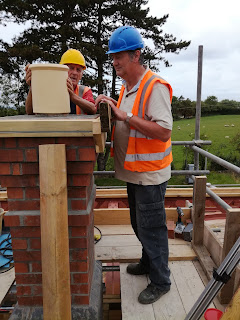 Brian, Peter Q & Dave are discussing the second stage of shuttering around the top of chimney 1. The shuttering will be used next Wednesday to form a concrete plinth, roughly 4" thick, which will be marginally wider than the brickwork & will hold the chimney pot in place. 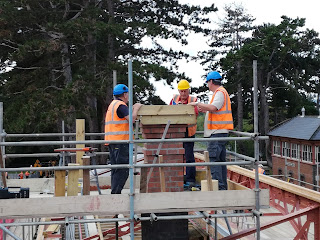 Here Neal C is showing off his great bit of kit on chimney 2. This is made up of 4 specially crafted pieces of wood which can be clamped squarely around the brickwork. A second tier of shuttering will be attached around this framework to provide the correct depth of concrete for the chimney's plinth.

As an aside, whilst I was taking this pic., Rod called up to say I should come down; " It's too technical for you". Then he said, about their trench work down the driveway, "Perhaps we are out of our depth, as well". 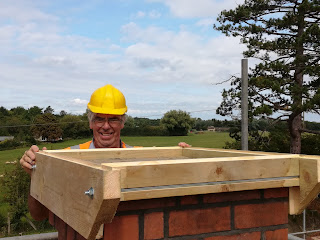 The Cleaners:
Vic beavered away inside the station building and was able to clear out & sweep the floors of the kitchen & restaurant. 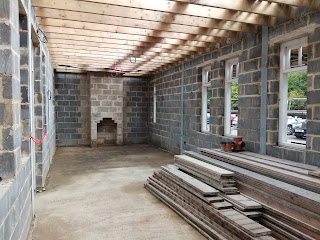 A drainage arrangement is needed at the bottom of the station driveway. Steve W was on hand to dig suitable trenches in the verge leading to the main rain water drainage pipe & across the bottom of the driveway where it meets the Evesham Rd. footpath. 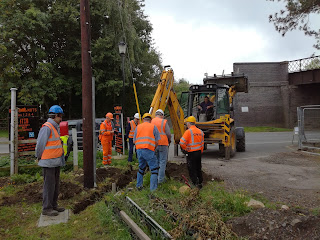 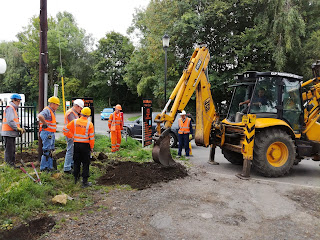 With many of us packing up for the day, Terry, Rod & Keith were still hard at work. Concrete gulley sections for the drainage were being laid in the trench across the driveway. Keith supplied concrete whilst Terry & Rod carefully measured the depth. This last pic. shows John C presumably discussing depths & measurements with Dave B & Terry. 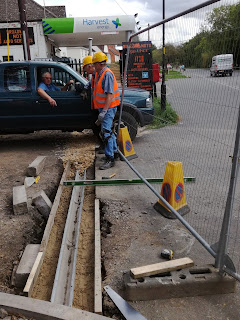 Altogether a very industrious day with a great deal accomplished .