19 hale and hearty (apart from a few dodgy knees and bad backs) volunteers today amid fine and warm August weather to lift the spirits, what a change from last Wednesday!

The first job for some, while they were still as fresh as daisies, was the planting of the second running in board post at the north end of platform 1. You may recall its neighbour going in a couple of weeks back.

The holes were dug out sometime ago so all that was required initially was to carry the post a few feet along the platform and position it feet first near the hole. The post in question is a genuine GWR cast iron post , it isn't light and carrying anywhere is not easy, so six of us positioned ourselves around it and with much grunting and heaving extricated it from its position amongst a few other posts and put it down near its new home. 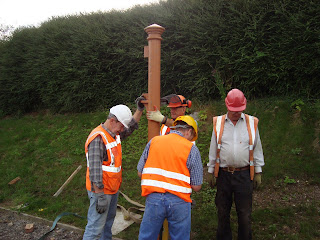 During the intervening time between post one and post two being planted the carpenters had obligingly produced a dummy running in board frame which enabled the posts to be set at the correct height and distance etc. By the time the photo was taken the post was in its hole and had a few bags of postcrete around its base. 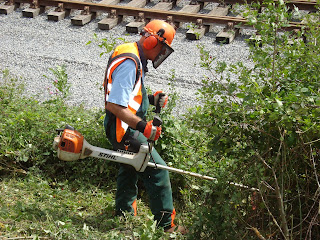 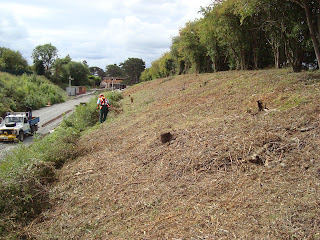 After spending the first couple of hours on the post project Brian reverted to the vegetation control. The second photo gives in indication of how much has been achieved in just a few short weeks. The brush cutter being used manages to chop the material to a reasonably small size so obviating the need to collect it all up for disposal. 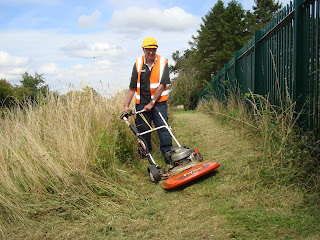 Also controlling vegetation on the opposite cutting side was Pat using the Flymo to maintain a decent walking way at the top. 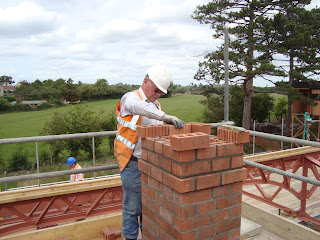 Bob is working on the northernmost chimney, at great pains to ensure that this one matches its southerly partner. Bob is a great believer in laying out the bricks in tricky situations prior to applying the mortar so that any possible problems can be overcome at this stage. The first course of the second corbelling is what is being laid out here and this course was completed by close of play. 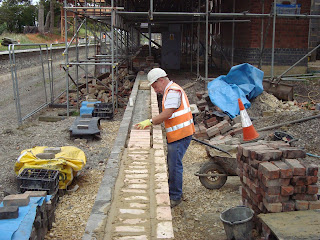 The filling of the gap in the platform 1 wall continues to make good progress, although the wall has been mainly built of recycled imperial bricks it has been difficult to prevent the red bricks at the back overtaking the blues at the front so a course of two of smaller 65mm bricks has been laid to bring the level back. This is the last course before corbelling and before the end of the day the first dozen or so bricks of the first corbel were laid. There will be three courses of corbelling. 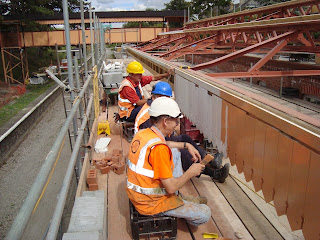 Work on the canopy continues apace, two of the carpentry gang are fitting and nailing dagger boards to the front of it as fast as they can to try to keep ahead of the solitary painter. Brushman Graham has been applying the first coat of undercoat all morning and is slowly catching up with the chippies. There are smiles on their faces so the banter must have been to a good standard at this point. 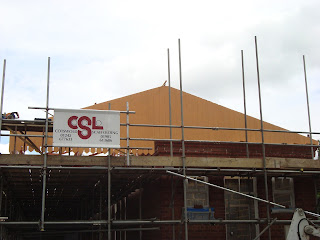 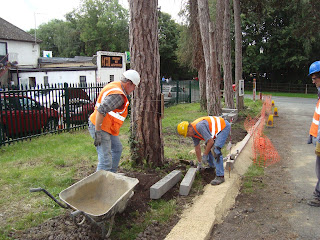 Obviously with plenty of energy left after early morning work moving and planting posts on the platform Rod and Terry go back to the day job of preparing the footings and laying the kerb stones up the drive. In the fullness of time the drive will be re-surfaced with tarmac and when this has been completed the level of the drive will be near the top of the kerbs on this side.

Elsewhere around the site.. 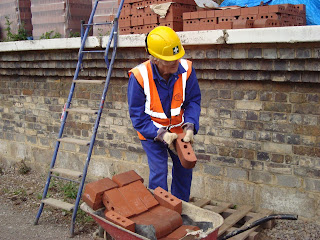 Chris continued to move surplus bricks off the trackbed onto platform two. 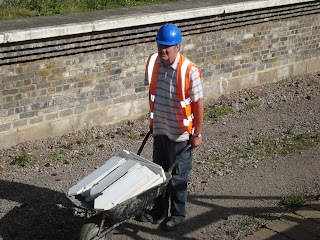 Daggerboard Dave, not seen in action for sometime, keeping the chippies supplied with the necessary 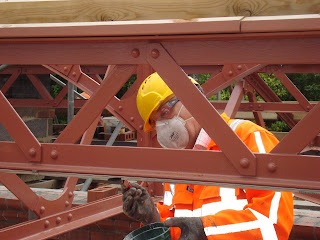 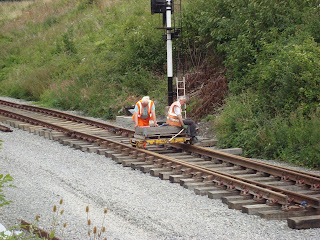 Two members of the P/way gang out for a jolly maybe? Or a test run on the newly laid track?
Did brakesman and pusher swap places for the return trip we wonder?