The weather, as forecast, was wet and miserable for all of the morning which severely restricted activities and also restricted the number of volunteers on site to 15.

The view looking towards Toddington at around 9 o'clock today was very dismal. 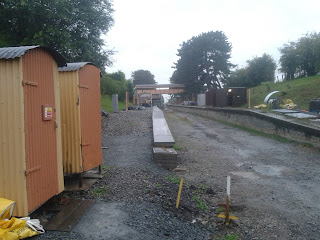 With just a few, for whom duty called, forsaking the sanctuary of the messroom to get struck in to... 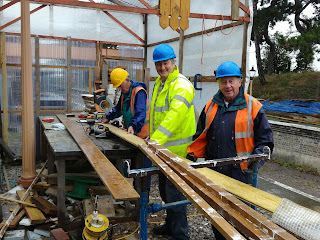 ...some more dagger boards, which during the morning was the only viable option as there was some shelter provided by the carpenters "workshop". The workshop actually is impeding progress on another project as the tall cast iron post on the left hand side, holding the whole thing together, needs to come out to be replaced by a GWR style lamp post but our doughty carpenters are somewhat reluctant to lose their haven. 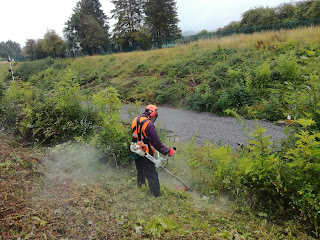 On the side of the cutting Brian continues to make excellent progress on keeping the vegetation under control, its a pity you can't see how much he's achieved in a short period of time. A photo opportunity for next time perhaps. His medium to long term plan is to work all the way this slope to the boundary fence then cross over to the opposite side and work back. He's going to lose some sweat doing all that! 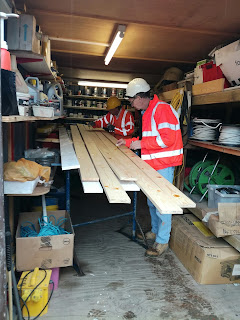 There was just enough room in container 1 to allow two of the painting crew to make a start on priming a delivery of timber which arrived on Monday. There is a mixture of moulded and plain and because they will be used on the outside of the canopy they are both in Scandinavian redwood. The 125mm x 25mm board will be behind the guttering on the drive side and the moulded timber will be above the dagger boards on the trackside 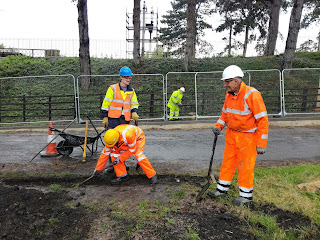 The rain eased slightly later in the morning and, fully kitted out in their waterproofs, the fencing and edging gang could resist the urge no longer. They are preparing the ground for an extension of the kerb stones on this side. These kerbs are lower then those opposite but that is part of the plan, they will be more of a demarcation line as vehicles will be allowed to cross them for parking. We don't have much parking space at Broadway so have to make use of what we've got. 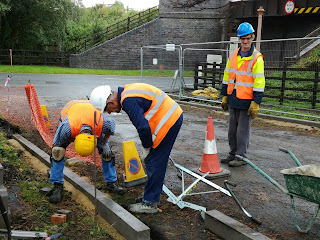 After lunch conditions had improved sufficiently for the kerbers to remove the excess clothing and make a start in laying the kerbs. Conditions under foot remained very soggy so much so that Terry's knee pads were not enough to keep his jeans dry, he had two very wet knees when he came to the mess to sign out. The galvanised tool on the ground behind Keith is something that we purchased a few months ago to help with the lifting of heavy objects like kerb stones or paving slabs. It allows two people, one at each end of the rig, to take part in the lifting and positioning. 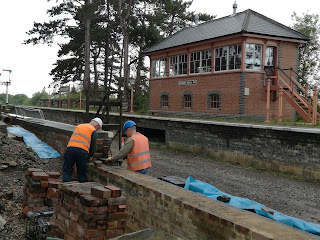 Because of the weather no serious attempt was made to work on the station building today. However, after lunch the bricklayers thought that they too ought to show willing and that maybe some bricks could be laid on the platform wall. Wrong! Everything was so damp that the blue engineering bricks wouldn't behave, they "swam" around on the mortar and any attempt at correcting them just made the, by now, very wet mortar run down the face. So that was abandoned after a dozen or so bricks at each end and the brickies transferred to the rear of the wall where they were able to lay some of the, more absorbent, reds. 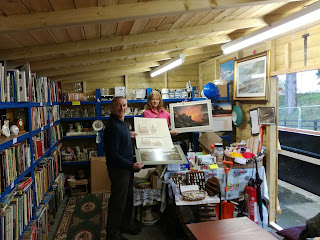 A very good photo of a seldom seen view, the inside of our bric-a-brac shed. Steve and Julie (I'm sure you can figure out who is who) are holding up some recently donated prints and pictures. Visitors were rather scarce today but if you are in the area call in, they would love to see you. The shed is normally open on Saturdays and Wednesdays. No money is left in the shed overnight!