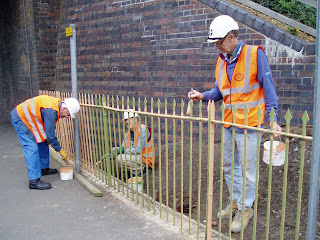 This morning 23 volunteers signed in and everyone was expecting a wet day and with all our jobs being out in the open we all expected not to get a lot done. How wrong can you be, we only had some mizzle mid-morning and got loads done.
Graham, Ray and Vic got straight on with undercoating the original spear fencing on Station Road just in case. 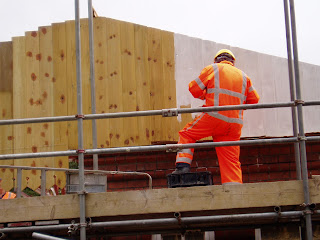 Mike made a start on priming the gable end of the station roof, it had previously been knotted. 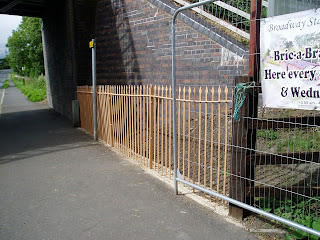 Later on in the day the spear fencing looking smart in it's undercoat and the sun is shining. As this fencing is original and had a lot of corrosion from years of neglect, it has had two coats of the primer used on the roof and will now get one more undercoat before glossing. Obviously the Heras fencing will be removed when the station entrance and footpath is finished off..... 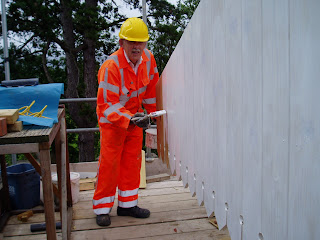 ,,,, and as it is still fine Graham has decided to do some more of the detail highlighting on the GWR replica lamp posts. 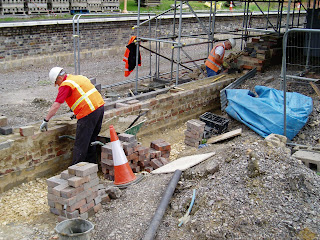 On the bricklaying front Paul, Clive and John S carried on with the brickwork on the platform 1 gap. They ended up having a cracking day and there are now only two more courses before the start of corbelling. Ian and Dave helped with supplying bricks and mortar. 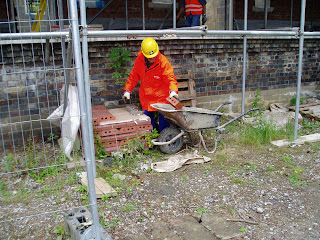 Chris meanwhile carried on with the moving of bricks purchased at the same time as the station bricks, they will be eventually used on the waiting room, but of course they have to be moved from the trackbed before tracklaying begins. 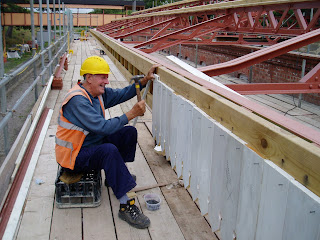 Up on the roof, after completing the gable end, Peter Q has started attaching the dagger boards to the front facia. Don't know why he looks so happy, look how far he has to go. 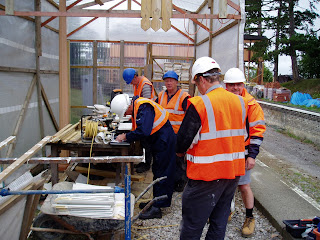 Down in the carpenters shelter Dave and Bryan carry on with the dagger board production. However, a slight delay as the electricians were on site to PAT test all our portable devices. A very important inspection to keep us all safe, thanks lads. 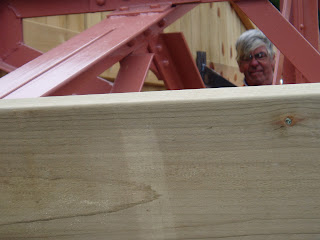 Back up on the roof Neal is doing some welding on a bracket he has manufactured to give extra support to the timber of the gable end. The bracket matches the design of the canopy steelwork such is the desire for it all to look right. I apologise for the poor picture but Neal had wriggled right in amongst the trusses to fit it and, by the way, he had only taken his welding helmet off briefly to speak to me. 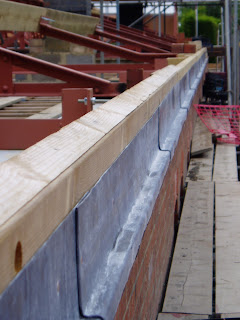 On the forecourt side of the station more of the wall plate and lead flashing had been fitted and you can see a cocking strip has been added to support the roof sheets at the right angle, 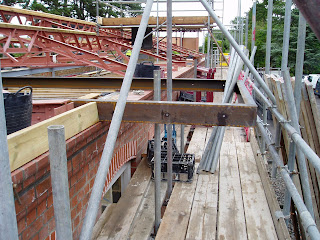 Also you will see in the next two shots that on Monday the RSJ's had been fitted that will support a small canopy, with a lead roof, cantilevered out over the main door of the station. 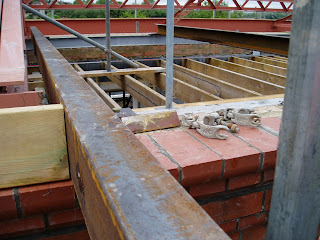 You can see in this shot that the main steels go right across the width of the station and are fixed to the steel ring beam of the station framework. 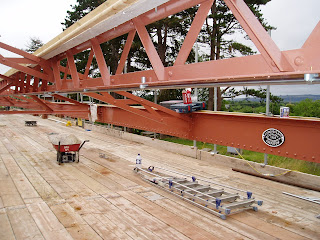 Our electricians, from Buzz Electricals, were on site today continuing their installation. Here you can see where the conduit is being fitted and the cables run for the canopy lighting. 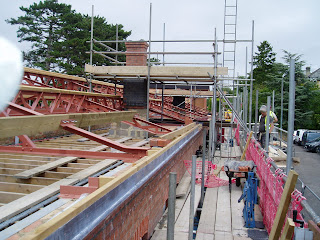 Also paying us a visit today were the scaffolders to erect platforms around both of the chimneys so they can be safely finished. 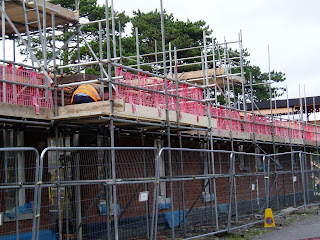 Here you can see both platforms finished and on the main scaffold Neal is using the extra width fitted at the same time to continue his work on the main door canopy steelwork. 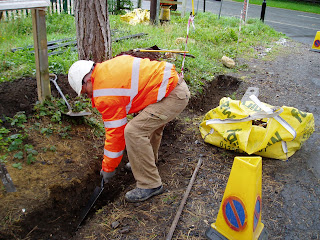 Meanwhile down the drive it was time to start fitting the kerbs on the garage side of the drive. These will be fitted flush to mark the edge of the drive but still allow cars parking in the few staff car spaces to drive over them. It took a while to set out the line for width and levels and initially some difficult digging in very hard ground full of large stones and tree roots. 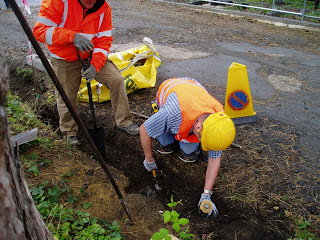 Mike, above, had to give up trying to dig out one such stone and let Terry have a go with lump hammer and chisel. 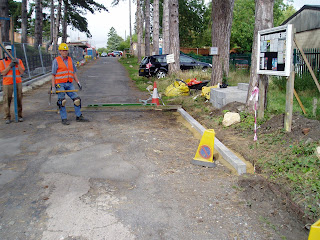 Later in the day the width and level being checked from the kerbs on the other side. After a moments panic we remembered  the kerbs on the right are 75mm lower, as they sit flush, so we hadn't measured wrong after all. 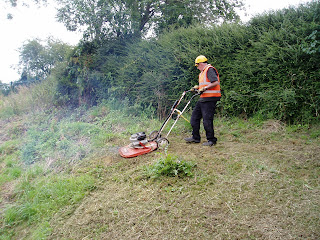 Elsewhere Pat is seen with a new acquisition, a quite old petrol Flymo which although smokey works well and can be handily lowered down the steeper bits on a rope leaving the operator on a safe footing at the top. 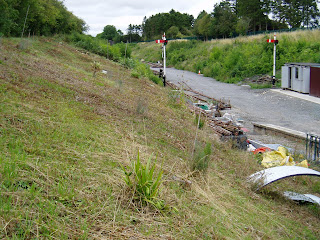 Brian M, pictured in last weeks blog, spent his day making his ankles hurt using the strimmer on the cutting sides. Over the past couple of sessions he has cleared a huge area, there is as much behind me as in front. Really lets signal 39 stand out in all it's glory.

So a day which started off lacking promise turned out fine.