A Day of Two Halves 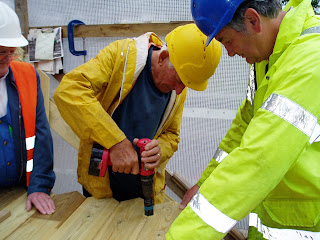 The morning started as forecast, wet. Still twenty three volunteers turned up and we decided to start with a doughnut from the selection Graham had brought in because it was his birthday. This didn't take long and we soon had to make a start. The chippies had the best place to work undercover whilst they finished off the production of the dagger boards for the gable end. Peter Q and Dave assisted by Ray start the hole cutting. 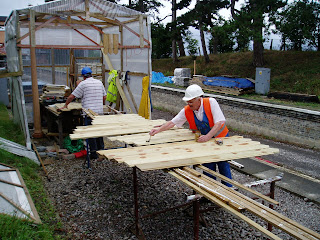 Later in the day during a drier spell Ray is applying knotting before the boards are taken up to the roof... 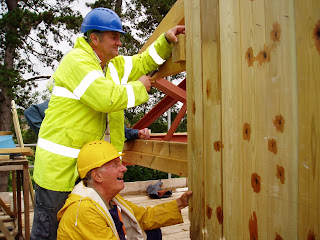 ... where Peter and Dave are fitting the boards in place, Dave tapping the T & G of the boards to a tight fit while Peter makes sure the bottom is in the right place. 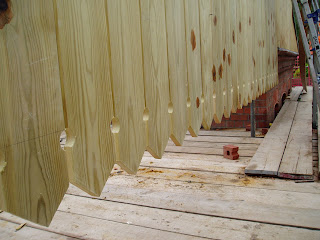 By late in the afternoon this part of the job is done. The boards levelled off at the bottom and nailed in place. You can see where the canopy reaches the station wall, the boarding steps up to flashing on the corbelled wall. 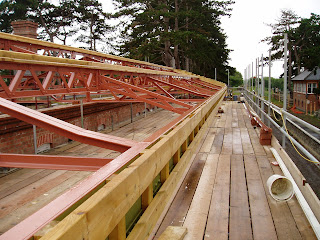 A final view from the other end of the station shows the boarding in place with just the tops to be trimmed to the profile of the roof. 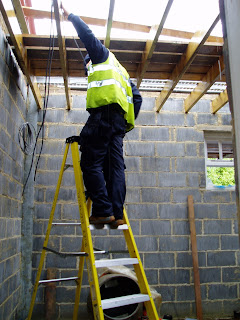 Also on site today were our electrical contractors, Buzz Electicals who were busy with the first fixings, running a myriad of cables rain or no rain. Most impressed that they pressed on come what may. 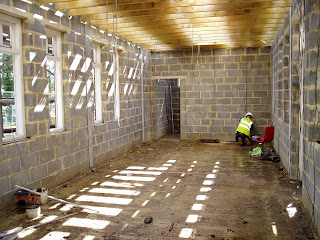 Later in the day , with the sun now shining through onto the cafe/shop floor, you can see the cables coming from the roof and the start of fixing in the respective places for the lights, power sockets, etc. 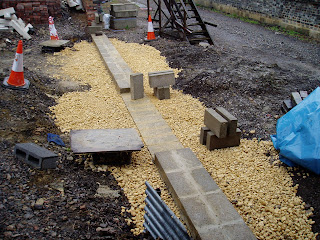 Early on in the rain it didn't look as if any work could take place on the gap in platform1. This picture shows that on Saturday and Monday the ducting and drain had been shuttered and concreted and more blocks had been laid. 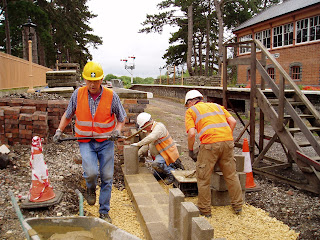 But later on although still threatening, Bob W assisted by Terry and Mike had decided to lay a few blocks. 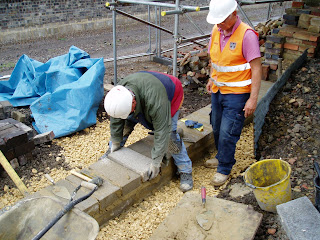 By mid afternoon after, Tony had joined in the laying from the other end, Bob was able to lay the last block of many hundreds that had been laid for the two platforms. The length of which, measured by PWay this afternoon at just over 214 metres.
Several hundred blue bricks were also barrowed into place so that bricklaying can commence, probably on Saturday 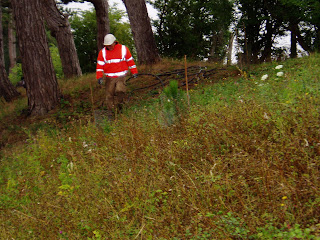 A job tackled early on while the rain stopped play on other jobs was the retrieval of a heavy armoured power cable that had been laid to the shelter where the spear fencing was fabricated. Mike up on the cutting side having sorted out a twist in the unweildly cable. 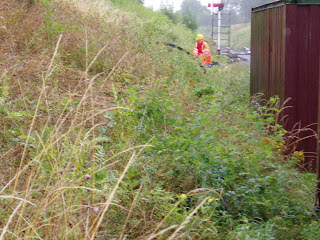 Looking the other way behind the containers, Terry pulling the cable through the eighteen months worth of undergrowth and into the clear. Terry, Mike and myself then managed to coil the cable back on to a couple of drums and these were put on a pallet as mechcanical help will be required to move it. We are hoping to reuse the cable elsewhere on the site. 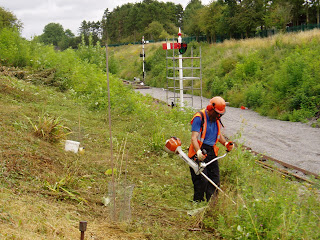 Also hard at work was Brian on the strimmer starting to cut back the aforementioned undergrowth now the wild flowers have died back, In the foreground is a little Corsican pine propogated by Jo from one of the original trees. You can also see the scaffold where S & T have been working on signal 39 and in the background the timbers where the turnout has been started by PWay. 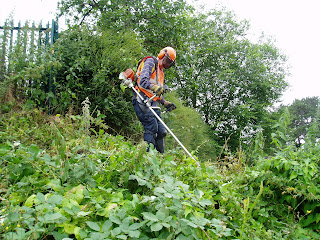 Pat similarly attacking the undergrowth on the opposite side of the cutting behind the equipment containers. 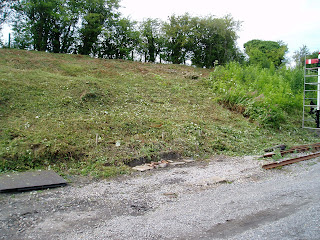 By the end of his day Brian had cleared a large area. The angle of the cutting side plays havoc with your ankles, To give his ankles a rest Pat spent an hour or so with the mower on the flat areas by the signal box. 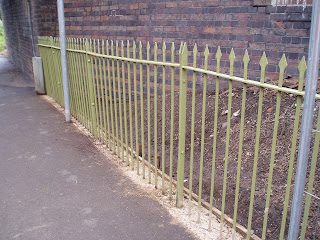 Finally a picture showing the repaired original spear fencing on Station Road, three panels are the originals insitu. The panel nearest the camera is one that was repaired by Peter K from a badly bent original. As the extended top rail of the first of the original three is built into the bridge and all three are still attached to their original ground mountings it was decided to leave them where they were, this meant the last panel had to be dug into the ground as over the many years of footpath relaying by the council the bottom rail had been buried. We therefore dug the earth out and concreted the bottom of the fence level with the footpath. The panels have now all been cleaned off and primed by Vic and will now be painted the same as the other spear fencing. Julie and Steve manned the shop which enjoyed some visitors despite the weather,