A Day for Coping

A very good turnout today considering the forecast of inclement weather, maybe the 25 volunteers expected an hour or two in the messroom drinking tea and putting the world to rights but Mother Nature had other ideas and the rain avoided Broadway completely apart from a light shower.

A little tidying up around the spear fencing for Terry and Vic before handing over this section. 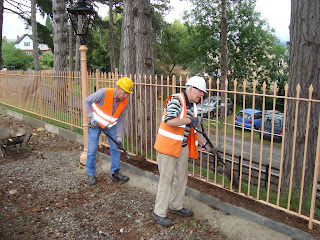 Hope they didn't chip any paint off, will it be grass or flowers in the little border just created?

Local builders merchant Fairview brought in 4 pallets of 100 mm concrete blocks to enable a start to be made on filling the gap in the platform wall next month. 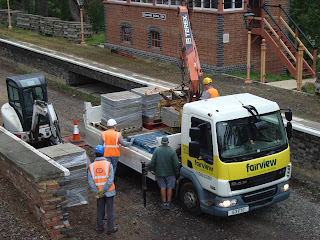 Some jobs need to be tackled while trackbed access is still available. The Fairview vehicle and its driver was booked on site all day so that it could assist the gang in positioning some coping slabs by using its hydraulic lifting gear. 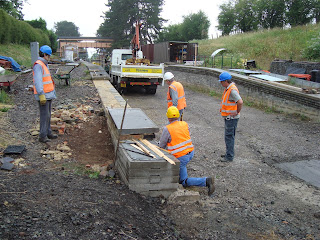 First to be tackled was the newly extended ramp at the north end of platform 1, the team seem to be well pleased with the first slab, followed a couple of hours later by the new section of ramp on platform 2 which was not quite so long as its neighbour 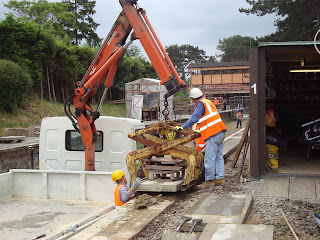 The last couple of hours of the afternoon were spent re-bedding four or five slabs in the middle of the platform that had become dislodged during the mass ballast movement earlier this year. This section proved to be the most difficult of the day, the old mortar from the previous bedding had to be chipped off first. By late in the day the hoist, guided by the team, is lowering the second slab onto the new laid mortar in this section with the levelling and aligning still to be done. The remaining slabs will have to wait until next week. 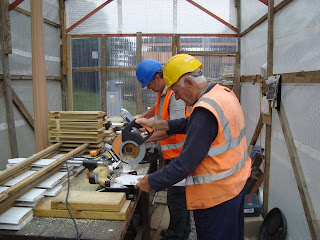 The carpentry dept had to spread their resourses. Daggerboard production proceeded as normal.... 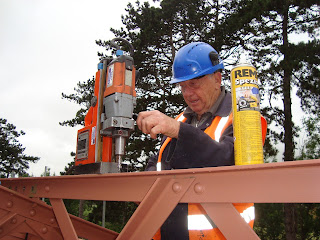 While Brian made a start on drilling 10 mm fixing holes for the timber that will sit on top of the steelwork. The holes are being drilled half a metre apart but on alternate sides of the steel using a magnetic drill has been specially hired in for the purpose. 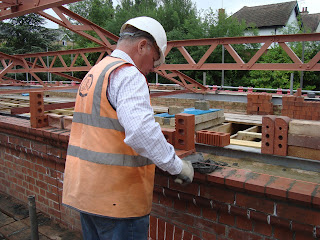 Much to the brickie' s surprise bricklaying was possible. Corbelling is on the final course and after today there are just over 100 bullnose bricks left to lay plus a few more commons on the backing up. 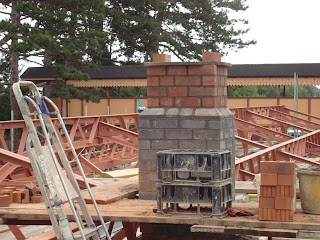 The live chimney is progressing upwards as fast as the conditions will allow. Last week the mortar was drying quickly enough for continuous bricklaying, this week was completely different. The moist atmosphere meant that the mortar dried much more slowly which causes the blue bricks to move around. Of course the red bricks now being laid will react differently so normal service resumes. 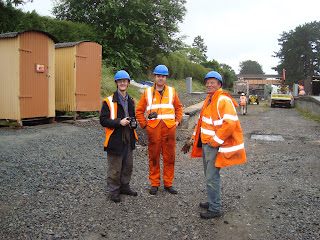 Exclusive, Steam Railway journalists come to see how we do it. Well not really, Toby Jennings and Thomas Bright looked around the Broadway site, escorted by the GWSR P/way director, and then went off to get their hands dirty with the P/way. Hope they enjoyed their day!
Posted by Unknown at 07:51