Twenty volunteers signed in today and we were blessed with a full day of sun & high temperatures.

Monday:
Before Wednesday's work is covered I would like to make a brief mention of Monday 12th. An encouraging number turned up for a very productive Monday. 10 volunteers signed in & we were joined by Neal & Ian from Loco dept., who continued with drilling on the station canopy steelwork.
BAG would like to say a big thank you to Allan Miller (GWSR director and P/way). Allan brought along a telehandler & moved approx. 300 3'x2' paving slabs from the trackbed at the southern end to a temporary resting place on top of platform 1, just north of the foot bridge. This was another important step in clearing the trackbed ready for when P/way arrive.


Wednesday:
Everything seemed to run very smoothly on Wednesday. Bob W & John S were the only two bricklayers on the station building. By the end of the day they had completed about ¾ of the final course of corbelling on the driveway side. 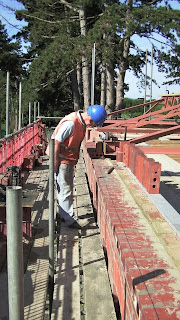 Bob laying a "Bullnose" & yes John it's another "Bullnose" 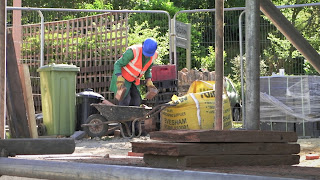 David is collecting "commons" for use in backing the last row of corbels.


Peter Q had prepared himself for Wednesday's production of "noggins" by building, on Monday, a lightweight bench which was winched up to the scaffolding platform. Brian T assisted Peter in the noggin production. The noggins will support lengths of 6"x2", on the face of the canopy, which in turn will hold the dagger boards. 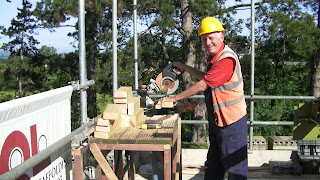 Peter at his new bench toiling away & below, Brian under the canopy steelwork shifting some roofing sheets. 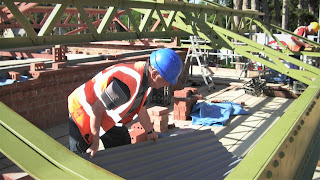 Also up on the building, our industrious painters Graham & Mike were sticking to their never ending job, putting more coats on the roof & canopy steelwork. 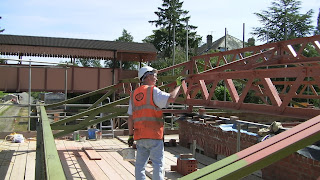 Graham applying a second undercoat to some areas & below, Mike appling a primer coat to others. 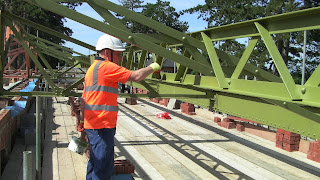 David H continued with the re-locating of our CCTV equipment & it's associated cable work. He is seen on platform 2 under the footbridge. 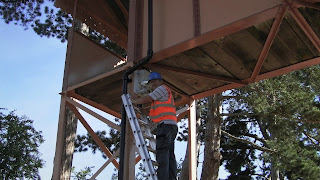 Clive is getting closer to finishing his corbelling work on the extended platform slopes at the northern end. He is seen working on the 2nd row on the slope of platform 2, with Tony backing up. 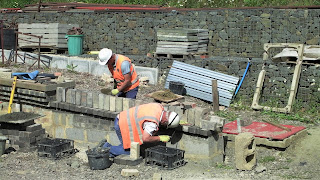 Pat was using the brush-cutter behind platform 1, in an attempt to keep mother nature at bay. 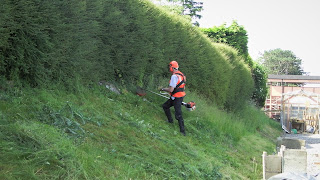 Mid morning we received another delivery of roofing panels (more preparation & painting for Graham & Mike plus a team, soon!). 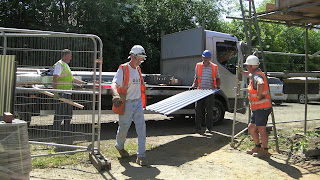 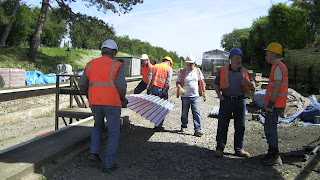 During the morning, the very northern end of the site Terry & Rod attached 3 strengthening brackets to the recently erected security fencing. They hope to fit 3 more along this area of the fence in the near future. A previous blog has mentioned the fence being "attacked" & slightly damaged by a deer; the poor deer not expecting a fence across his/her usual route. The brackets are bolted to the fence & then set in the ground with postcrete. 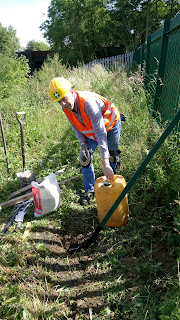 Rod's pic. of Terry adding a little water to the postcrete. 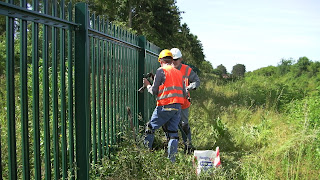 In the afternoon their attention turned to the southern end of the site, where they continued with
laying more edging, to the rear of platform 1, under the new speer fencing. 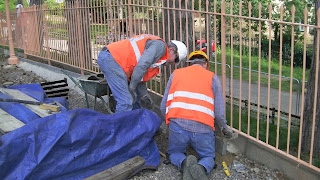 We must not forget Ray, who travels from Lichfield to join us. He slaved all day, in the relative cool under the pine trees, painting top coat on the speer fencing behind platform 1. 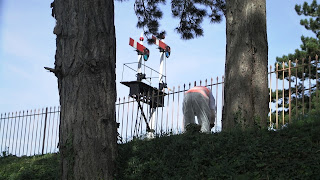 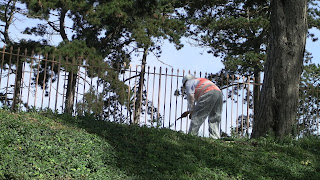 Finally, thanks to Julie & Steve for receiving several casual visitors & for running the shop.
A good time was had by All.