Painters to the Fore 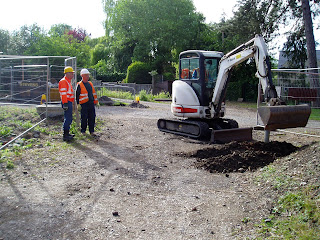 One of the first jobs on this pleasant morning was the removal of the main gate into the site and it's posts. Dave and Tony having removed the gate act as banksmen while John C lifts the post complete with it's concrete collar. The gate has been removed prior to commencing to filling the platform 1 gap. The site will be closed off by the Heras fencing at the end of each shift. 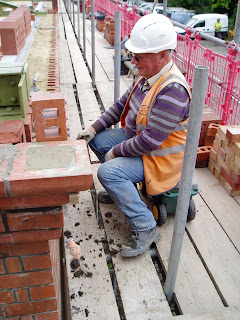 On the station building Bob W tries out his new toy toolbox which is complete with a seat and wheels whilst continuing with the corbelling. 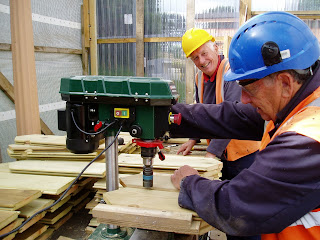 Peter Q and Brian carry on the daggerboard production. Later on a large quantity of timber for the roof which had been delivered had to be carried in and stacked, so they will have a change of scenery up on the scaffolding soon. 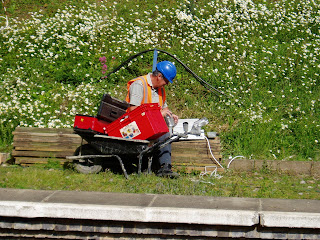 Dave H spent most of the day upgrading and repositioning the security cameras. Adding an extra camera and attaching them on the footbridge. 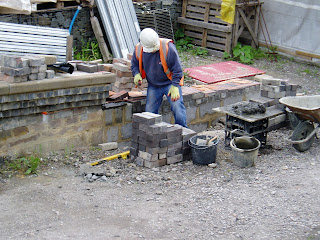 Clive having finished the extended slope at north end of platform 1 continues on platform 2. Hopefully these will be finished and have the edging slabs fitted by the end of June. 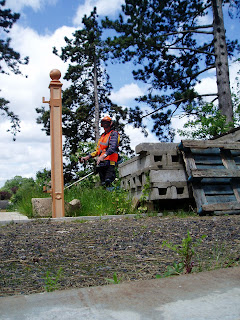 After all the rain and sunshine Pat decided the brushcutter needed an outing to tidy up platform 2 near the signal box. behind him are the stacked signalling troughs waiting for later installation. 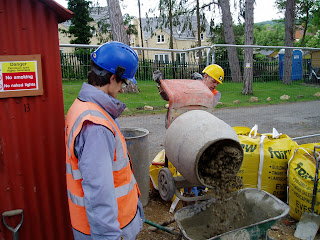 David waiting for Terry to fill the barrow with concrete to fill in the last holes of the previously fitted spear fencing. 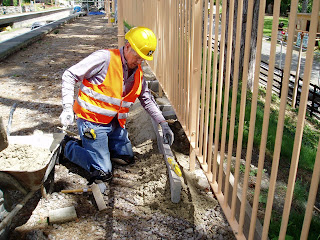 Terry then started laying the new back edging slabs in front of the newly installed spear fencing. This is required because, as you may remember, we had to step in the spear fencing owing to the proximity to the top edge of the embankment. 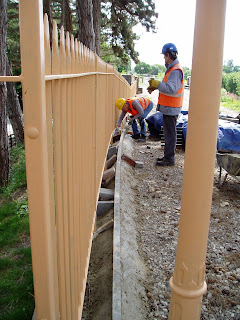 This shot, later in the day, shows the edging following the line of the fence as it narrows at the end of the platform and drops down the slope. The fence now continues on to the pillaster of the Station road bridge as added security to the station site. 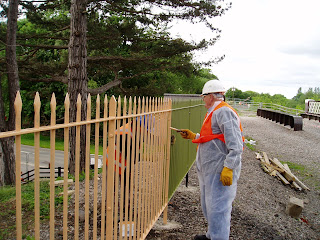 Now for the painter's part in the day's proceedings. Ray and Steve B, round the back, carry on with the painting of the spear fencing. By the end of the day all the fencing erected had been primed and had a coat of light stone undercoat. 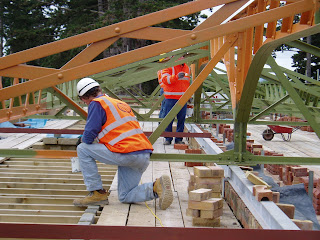 Up on the scaffolding Graham and his team had started on the undercoating of the canopy steelwork. Although there is a lot of drilling and rivetting still to do there is a lot of steel that could be painted and with two undercoats and a gloss to do it was decided to crack on. The chippies are itching to start adding the woodwork. 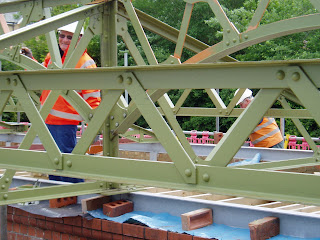 With Mike hiding amongst the lattice work this gives you an idea of the size of the painter's task.
John C in the background, after demolishing the gate, carries on with some corbelling. 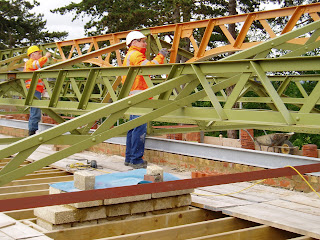 From the station forecourt side you can see Dave B and Mike working on the ridge purlin. In the foreground the dummy chimney is beginning to rise through the steelwork. The live chimney for the cafe is just out of shot and more advanced than this one. 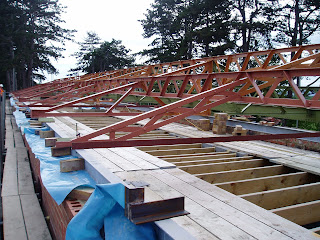 At the end of the day and ten litres of paint later all that could be undercoated, on the forecourt side of the roof, had been. A good days work.

As always the shop was open and we seemed to have a goodly amount of visitors today, which is always nice for us when people show their interest in the project. We always try to acknowledge our visitors but with masses to do and time getting shorter we might not have too much time too chat.