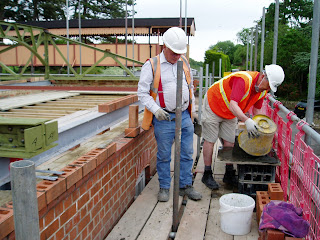 Twenty four volunteers signed in today and were joined by two from the Loco dept. After last week it was nice to have it a bit cooler, a good day for working. A visit to the scaffolding found Paul delivering some mortar to Bob who was laying the forecourt side corbelling. 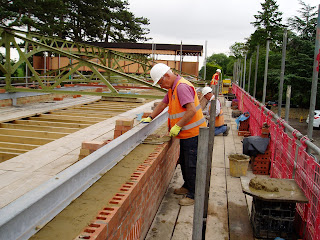 Whilst further along on the same side Tony was busy backing up and filling the voids. 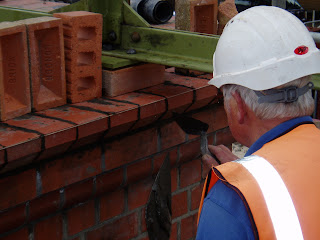 On the platform side of the building John C is pointing up some of the corbelling he had laid earlier. A time consuming job, not made any easier by the shape of the bricks. The bricks standing on end are to stop the corbels tipping forward before the mortar dries. 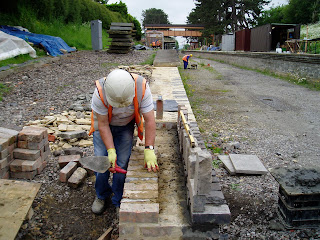 At the north end of platform 1 Clive is backing up the corbelling, he had laid earlier, on the extended slope, again you'll notice bricks stood on end as weights. He is also working on the same job on platform 2. In the background Chris is collecting some spent ballast to continue with making access ramps to the various containers that were resited. 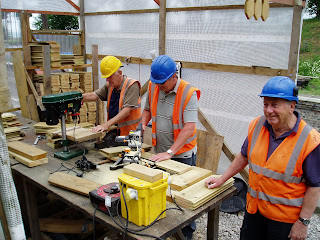 Dagger board production continues apace with Peter Q setting up the pillar drill ( I got his name wrong in last weeks picture, have I heard the last of it, not yet), Dave with the chop saw cutting the points and Brian doing the fetching and carrying in between trying to sort his stores out after the move. 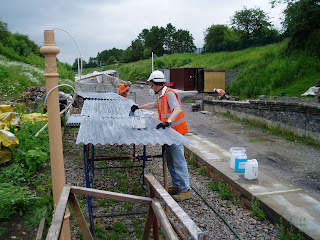 On platform 2 Graham and Mike carry on with the preparation of the canopy roofing sheets. As well as priming some spear fencing and even helping the fencers later in the day. Although Graham did say he prefers the weight of his paint kettle to the barrows of concrete he pushed for us. 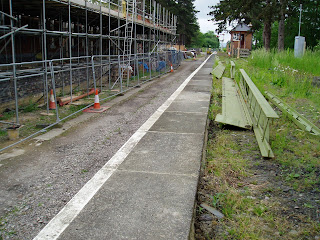 Early this morning I noticed some more parts of the canopy had been pre positioned ready for lifting into place probably on Thursday.
The solid sections are the facia boards which will be fitted on the ends of the trusses. They will then have timbers fitted to the front of them, the dagger boards and guttering will be attached to the timber. The lattice work sections are the purlins which will connect between the trusses. 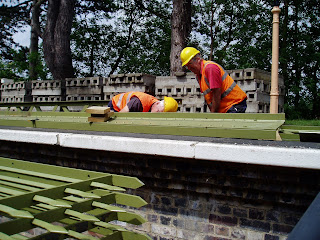 Whilst passing with the dumper loaded with new spear fence panels I spotted Neal and Tim from the Loco dept blocking and supporting some of these panels before some more hole drilling in readiness for the lift. (I did select neutral and apply the handbrake.) 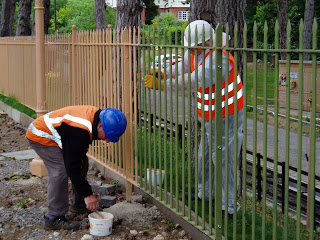 Talking of spear fencing, Ray still painting, today assisted by Steve, good to see back on the tools after recovering from some surgery. 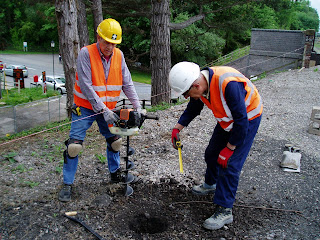 Further along we thought some more panels ought to go up before the painters catch up. The plan was to reach the bridge from the bottom of the platform slope. It had been decided that this should be done before the signal post for this location was planted. Terry with the augur waits while Keith checks the depth of the hole. 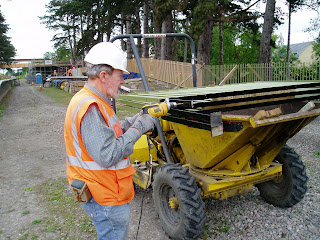 Because a hole could not be dug close enough to the bridge wall a leg was shortened on a panel, an extra hole drilled and the panel rawlbolted to the wall. Rod using the dumper bucket as a handy work bench. 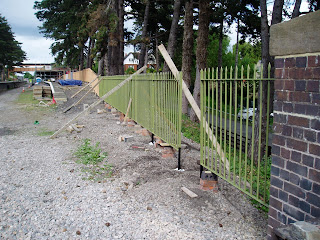 By the days end eight panels had been erected and concreted in leaving only a short gap to be filled by a panel that Peter our fabricator can measure up for, to finish this particular part of the task, Our S & T colleagues can then plant their post. The ground level in this area is very low and will be made up later on when the track is laid and the barrow crossing installed at the bottom of the slope. 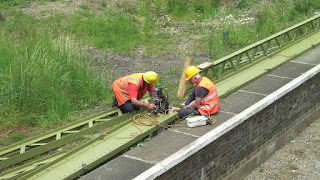 Paul has sent me two photos, the first showing Neal and Tim with their mag drill, taken from the station scaffolding. 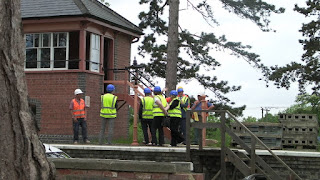 In this photo the railway's finance director, Chris Bristow, is conducting a group from our local Wychavon District council on a site visit, with Tony B and John C on hand to help with any questions. It is heartening to know they are interested in what we are trying to achieve.