What a Glorious Day 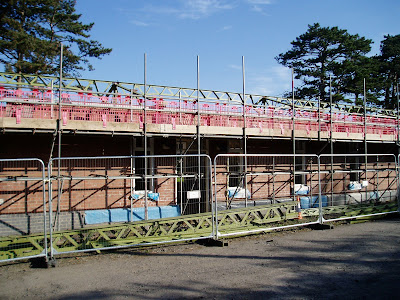 When 24 volunteers turned up on this glorious morning most were in for a surprise. This was the sight that greeted us, the beautiful roof and canopy steelwork had appeared atop the station building as if by magic. Our colleagues from the steam loco department, who have manufactured most of it, had been hard at work yesterday erecting the main trusses and purlins. See the Extension blog, link through the icons heading this page, for more pictures and a write up of the proceedings. 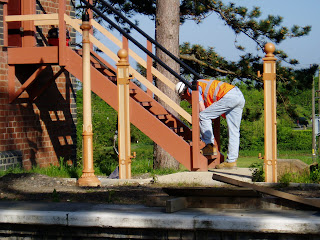 So to our own work for the day, the painters were soon hard at it. I caught Graham hoovering on the signal box steps, I thought it was a bit OTT for the open evening, but it turned out he was putting another coat on the steps. 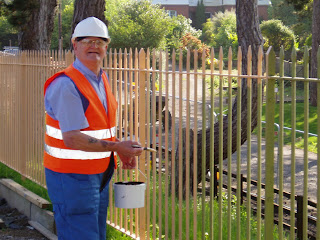 Ray spent his day undercoating the spear fencing at the rear of platform1, this is going to turn into a Forth bridge job. Later on in the day Keith, Rod and Terry added two more panels for him to paint in the area where the viewing platform has been taken down. The rest of the fence up to the station will have to wait until the gap in platform 1 is closed and the ground made up to the correct levels. 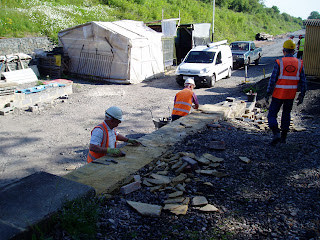 At the other end of the site Clive and Tony are clearing the mortar from the top of the platform wall where some of the platform edging slabs have been removed. These slabs are to make up the shortfall for the aforementioned gap, we want to match the existing slabs. This area and the slope extensions will have ex Cheltenham slabs fitted. Centre background you can see one of the three signal posts that S & T have erected prior to the laying of the head shunt. 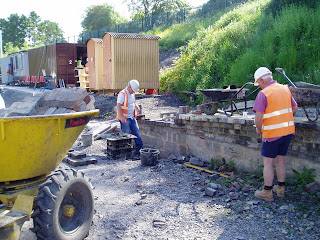 Afterwards Clive and Tony carried on with the corbelling of the slope extensions. In the foreground our trusty Thwaites dumper is loaded with the 300 red and blue bricks required to finish this job. They were delivered by the shifters, Keith, Martin, Terry and Rod assisted by Paul having a break from muck mixing and brick cutting. 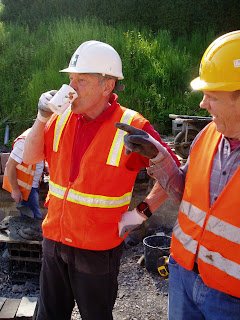 Paul only functions on copious amounts of tea. As we were working near the newly sited mess room, which John C and his son, an electrical contractor, had recently reconnected the supply to including the tea urn, he thought he should top up. Terry looks on in amazement at the quantities involved. 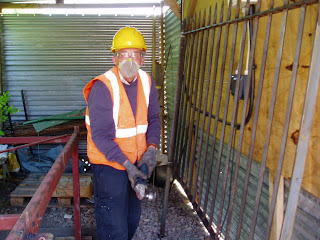 Mike S suitably kitted up for wire brushing the recently made spear fencing panels, before going on to help with the priming. 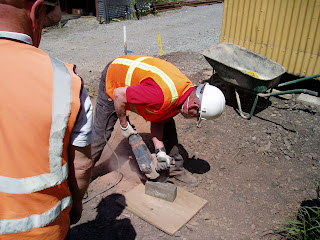 Paul now suitably refreshed gets back to cutting the bricks at the required angle to finish off the slope extension before corbelling. Clive waits, probably trowel in hand, to lay them. 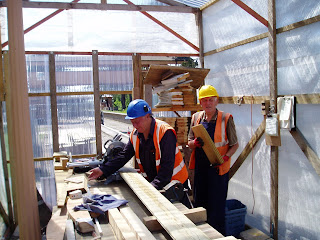 In the carpenters shelter, after a delivery of new stock of timber, Keith and Brian carry on the process of dagger board production by cutting the planks to the required length.

Down the drive the lifting gang went on to preposition about sixty kerb stones in readiness for extending the path now the viewing platform has gone. Also a general tidy up of the area and re positioning of the Heras fencing took place. Vic was mowing and tidying the grass areas and Julie and Steve had a steady stream of visitors to the shed. 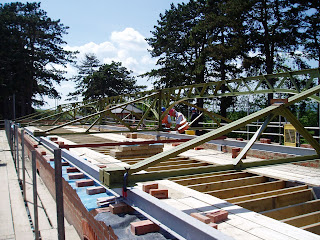 A final couple of shots of the canopy. Ian and Neal from the loco dept, aided by John S and Jo,  worked all day on the steelwork drilling, welding and bolting the various parts together. I'm told all visible bolts will eventually be replaced by rivets. Well done chaps it looks great. 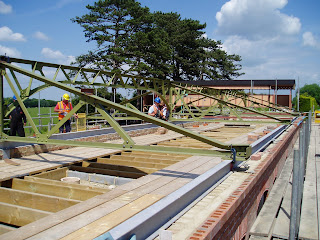 I assure you the pictures do not do it justice, so now you have another reason to visit us on Friday for our open evening.
It's forecast to be a lovely day so come and join us 1830 until 2030.

Just a reminder that unfortunately there is no parking, except some disabled, at the station, but you can ride a vintage Routemaster from the Childswickham Road car park.