Getting Ready To De-Camp

One of the main tasks of the day was the getting ready for next weeks move of the various containers from platform 1 to the new concrete slab and to platform 2. Today we had 26 volunteers on site, weather was mainly overcast all day but pleasant enough.

Firstly Peter and Dave set about splitting off the carpenters shelter from container 1, the picture below shows the shelter without the joining roof. Eventually container 1, which stores our fixings and everyday items, will head over to platform 2 and the shelter with its work benches, at a later date, will probably follow. Our little shelter has kept us dry and seen many jobs started and completed, in the right hand corner on the racking is the latest . Stored here are about a quarter of the station
canopy daggerboards ready to be knotted , primed and undercoated. 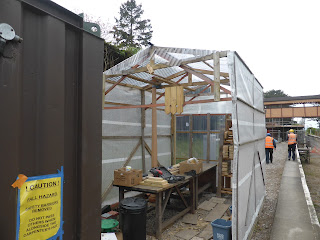 The shelter is built round a lamp post so quite a bit of dismantling will be required. The lamp is one of the earlier too tall commercial versions. This too has to be extracted and replaced by our new shorter station version.

Afterwards Pete, Brian, Dave and Chris had a sort out of the contents of container 1, useful items were then boxed and secured, everything inside has been made ready for the move. Then onto sorting out container 2.

On the station building corbelling was moving on at a pace.


John C had completed 2 of the corners at the north of the station, whilst Bob, Tony and John S pressed on with the first row on the platform side plus the backing bricks.
Keith S supplied the cement, and Ron and Dave kept up a steady supply of bricks.

Down on the drive Terry and his team finished clearing the area around bottom manhole, this allowed the further fitting of the Kerbstones, 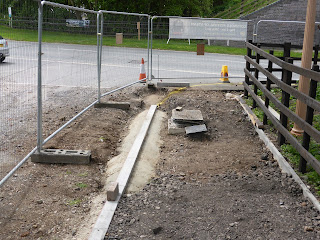 Mean while further up the path Vic straightened the rings supporting the lamp electrical man holes and later, seen behind, removed the shuttering around the drainage manholes. 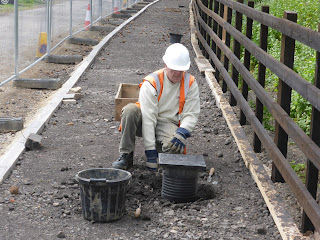 Elsewhere on the drive David B and Gordon were seen in a hole. 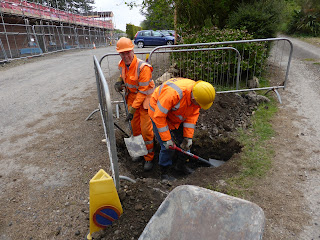 The duct for the power inlet to the station building ends behind Gordon, on the left, their task was to find the existing feed that supplies the properties in area and eventually link to it. It was decided it would be safer, but not necessarily easier, to hand dig to find it, so hence the two men in a hole.

On the northern end of the platforms Clive carried on with extending the two ramps. 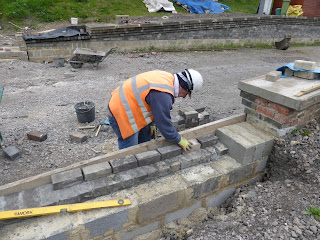 Platform 1 in the distance has had its first corbelling layer, whilst in the foreground the bricks are being presented. The wood behind the bricks is Clive's line showing the slope he`s working to.

Around the site "The Likely Lads" seemed to be everywhere!

First they were working on the station roof panels and next seen treating the fence at the bottom of the drive and after constructing and painting some lamps, they were then seen fitting the lamps first on platform 1 and then on platform 2.

Elsewhere down on the embankment.

The smoothing and clearing of the embankment getting ready for the soil nailers was proceeding at a pace.


The ground at the bottom of the slope has been leveled and the embankment has had its vegetation removed and is now in the final stages of being smoothed out.

Elsewhere around the site , Brian was removing rust and then treating the newly made spear fencing. Ian was giving the excess vegetation a good strimming, and Steve B had a steady stream of visitors to the Broadway Goods shed. Posted by David Holdsworth at 11:52