Progress on many fronts

A bit of a change in the weather from what we've been used to in recent weeks. Lately we've had some reasonably warm April sunshine but today, a cool wind from the north and occasional showers of hail and rain but despite this 18 of us dug out the thermals and turned up for work.

Flashback
What we've been up to while you were away.

On Friday last our contractors carried out the concreting of the pad, north of platform one, where two of the containers will sit in the near future to give a facility for future maintenance staff. 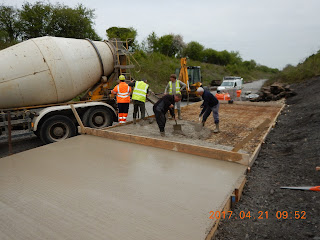 When the concrete has set sufficiently a small retaining wall will be built along the right hand (rear) side before the containers are lifted into position.

And then last Monday
The usual bricklaying gang started the day working on the extended platform ramps at the north end. This activity escaped the camera lens at the time but what was achieved will become apparent down further down this page.
After the ramps we returned to the station building which in the meantime had had the scaffolding raised to the next level....... 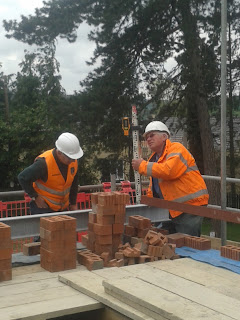 The first job was to check, with a laser level, the levels of the four corners and they were spot on (we knew they would be of course). 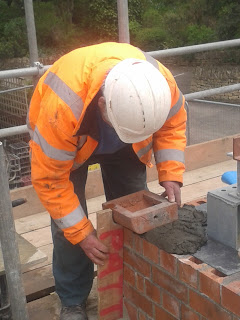 Then, John C could make a start on the corbelling setting up all four corners with these specially manufactured bricks using the piece of wood that was, with the best of intensions, going to have "pattern" painted on it but ended up as a "patt".

In the carpenters shop, very nicely sheltered from the biting wind it must be said 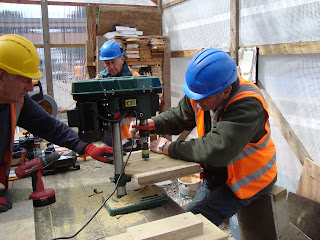 Daggerboard Dave, making a welcome return after his recent trip, using a holesaw drill to cut the necessary holes in the boards with Brian, after already completing his shift, in the background and Pete Q on the left ensuring that all goes to plan with these daggerboards because they are being made in advance of the station roof being ready for them (although they are slightly over length just in case). 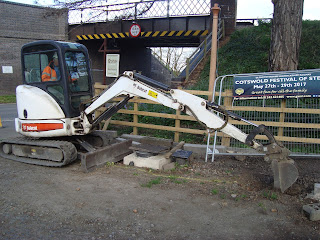 Footpath kerbing at the Station Road end of the drive had been held up for a few weeks waiting for some serious soil rearrangement to be carried out by the 360 digger. The kerbing gang needed to be able to lay some concrete footings so the kerbstones could laid with the correct slope. The surface had become too compacted, over time, to remove by hand and so John C had a day off from bricklaying to carry out this task. 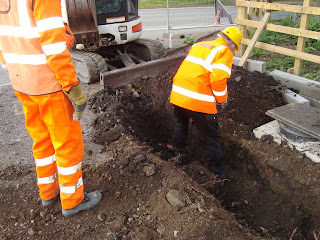 After the digger had done its work Dave B, in the trench, and Gordon scraped out the residue and made the trench presentable for some footings to be laid. Note newly exposed drain by Dave's right leg, have we seen that before? 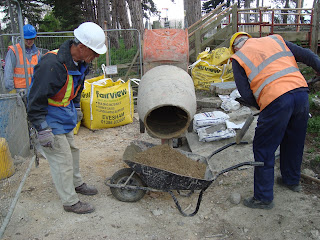 So Dave B, who was in charge of the operation, rounded up few people to get stuck in to some to serious concrete mixing.  "Hong Kong" Ron, David, in the background, and Peter Q, seconded from the carpenter's shop as the ones selected. Concrete mixer and necessary materials are located at the station end of the drive while the trench to be filled waits at the other end. 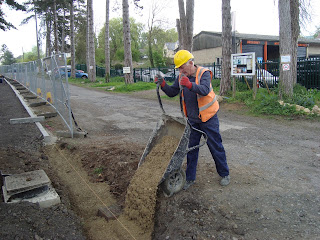 Which is where Peter Q duly delivered several barrow loads of the stuff. At least it was all downhill with the full ones Pete! 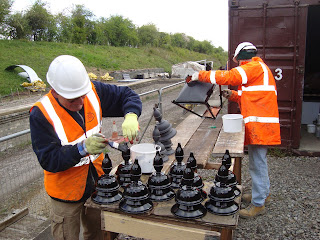 The likely lads of the paint dept started the day by painting all of the unpainted lamp post tops. The reason for this is twofold, one is to prepare the tops for installation on the posts and the other is to clear the containers of as much material as possible. 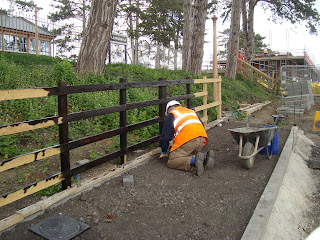 Following that exercise they moved on to the wooden fence running up the drive and gave it a coat of preservative.

While we all were beavering away getting the station as ready as possible others were at work elsewhere. 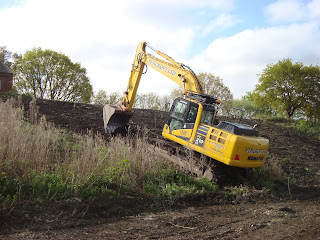 Busily working on the embankment side opposite the former goods shed were contractors George Law Ltd. The excavator in this view is doing some profiling to the sides but mainly, at this stage, clearing the vegetation so that the soil nailers can start marking out the positions of the soil nails 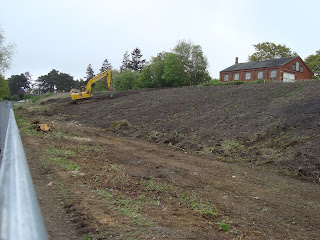 As can be seen good progress was made today. In the previous view the goods shed can just be seen and the southern boundary of the work can just be seen, The excavator worked north during the day towards Evesham Road, the stretch of embankment being worked on stops short of the road bridge.

Back to the station 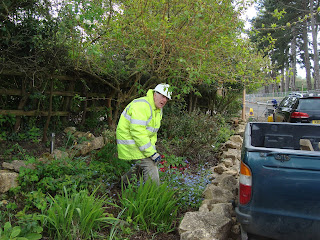 Vic, our head gardener, after spending an hour or so on the kerbing decided that the weeds were showing their heads above ground level and needed dealing with, hence, the rest of the morning spent weeding. 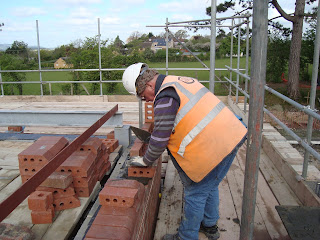 Bob W and John S, on the trowel aided, by Tony on the mixer continued the corbelling work started on Monday, this is Bob working on the northern gable of the station building. Good progress was made due in no small part to the quality of the mortar, nothing more frustrating than finding a foreign body in the mortar when trying bed in a brick. 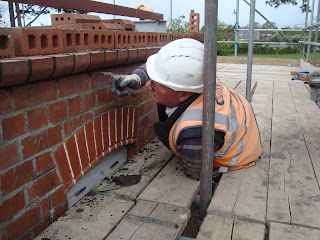 As can be seen corbelling at this level has its downside. Bob W lying down on the job? Its the only way to point the joints hiding under the corbelled bricks and there are hundreds more bricks to lay and point like this before we move up to the next course. 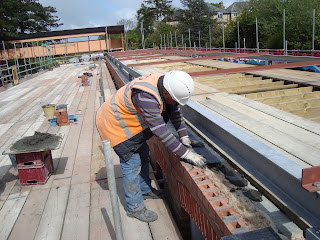 After we had corbelled ourselves out for the day Bob, Tony and John moved to the more comfortable occupation of bedding the slates over the cavity to afford it protection. The slates left over from the signal box roof were used for the job. 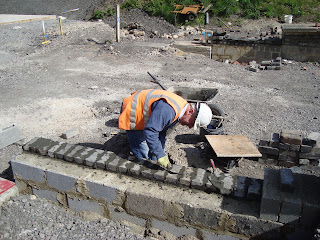 As mentioned earlier, the platform ramp extensions. Clive continued to build up the ramp extensions by laying the first course of bricks on top of the 9 inch concrete drainage block that were laid on Monday. This was the view in the afternoon with platform two being worked on. The other platform was done during the morning. 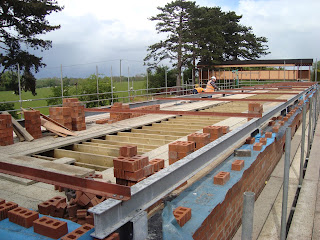 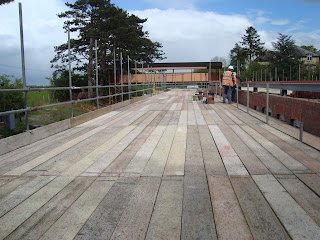 The scaffolding work surface now extends all the way across and over the platform and lands on the trackbed at the left hand side. This should ensure that when the roof is installed it can be safely worked on all round.
As I'm sure you can imagine various suggestions have been made about alternative uses for this area including ten pin bowling, helicopter landing pad, rest and relaxation area for the volunteers. You name it we've heard it. 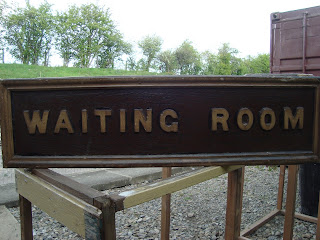 The railway has recently been given the sign shown in the above picture. Channel 4, the television station, are the kind donors and we have been told the sign originated from Cheltenham St James station and its patina is very noticeable. It is planned to build a waiting room on platform two at some stage so hopefully the sign will find a home there.