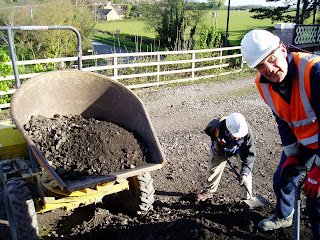 Nineteen volunteers were on site on this lovely spring morning. It was a bit chilly at first but we had a plan. A lot of infill was required on the driveway pavement and being short of a digger driver today we decided to do it the hard way; shovels. We have a stock of spent ballast ideal for such a job and Keith, Ron, Terry and Rod get stuck in. 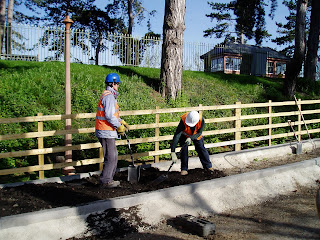 Down the driveway David and Tony start levelling out the ballast just tipped. Further up the path inspection chambers for the drains and cable ducting had to be lifted. Ply shuttering was made up to create the manhole cover supports and later on concreted up to the level required for finished path level. This proved time consuming to set up because of the fall towards the drive for water run off and the slope up the drive. 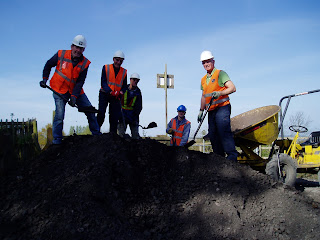 By mid morning break we had uplifted about eight dumper loads or about eight ton. Some clothing had to be removed, the sky was a lovely blue and moisture was on the brow. By lunchtime we were winning, Terry got the roller going and by end of day the job was done and about twelve ton uplifted. Unfortunately in the excitement I forgot to take a picture of the finished job. 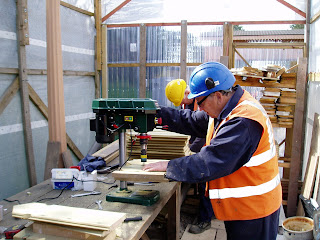 In the carpenter's enclosure the dagger board production line was in full swing.  Peter Q in the background is pairing up some he made earlier. Whilst Brian T is using the pillar drill with a hole saw and jig to put the hole in the right place where the two boards meet. 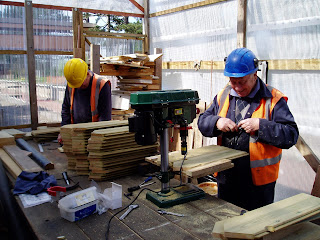 I'm not sure whether Peter has dropped off or whether he's just realised how many there are still to do. Just don't tell the painters! 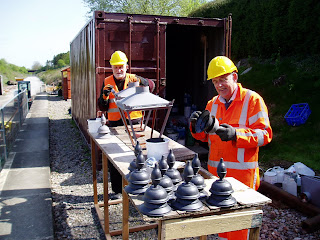 Further along the platform Mike and Ian are starting the process of painting the lamp lanterns, which when glazed will be attached to posts already erected. 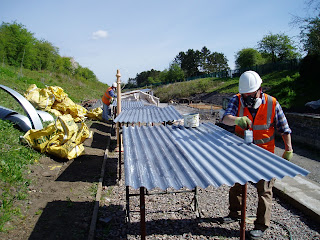 On the opposite platform Mike and Graham are working on the canopy roofing sheets. A lot of sheets and a long process, each having to be degreased, washed off and dried and then coated with an etching primer before priming. 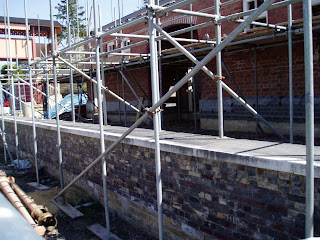 There were no volunteers working on the station building today as our scaffolding contractors  CSL were on site to start uplifting and extending the scaffold prior to corbelling and canopy steelwork erection. As well as being uplifted the scaffolding has had to be taken out onto the trackbed to allow for the canopy cantilevering over the platform. This work will be ongoing for the next couple of days and should be visible on the camera. 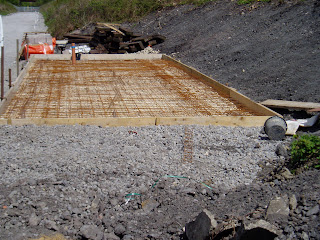 At the end of platform 1 the contractors have prepared the slab prior to the concrete pour for the maintenance facility base. Some more reinforcing was added today prior to the pour on Friday. The slab will incorporate a retaining wall along the back edge. 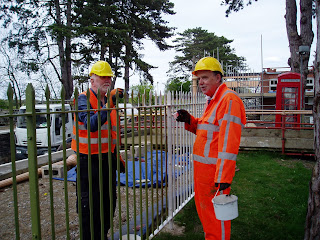 After finishing the lamp tops Mike and Ian made a start on the first undercoat of the spear fencing. 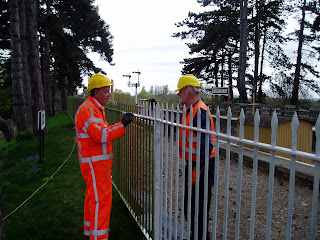 A look later in the day shows the distance they still have to go, two undercoats and a gloss should keep them busy for a while.


Also today a site meeting took place with the contractors, George Laws who will be starting on the embankment repairs on Monday. Vic was mowing to keep the site tidy and Julie and Steve were manning the sales shed.