A Lovely Spring Day At Broadway

A cool but dry start of the day turned in to a dry and warm day, the type of day that the volunteers wish for. 22 turned out today to continue the various work around the site.

First out on the track bed.

Early in the morning 6 lorry loads of type 1 ballast had been delivered to the car park and the dumper twins of John S and Jo ferried the said ballast to the northern part of the track bed.


After many trips Steve our contractor was then ready to start the spreading and leveling.


More in depth information can be found on the extension blog written by Jo.

Later in the day after he had finished at the northern end, Steve with a little help from his JCB was seen dragging rails along the track bed from the storage area.

At the Station Building

Due to various meetings bricklayers were a bit thin on the ground (or scaffolding) today.

Bob was completing a final layer of bricks on the south side and part of the drive way side. 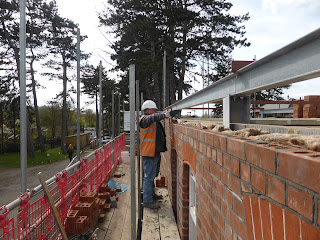 Inside he later joined Clive on the chimney, which has now reached its previous height. 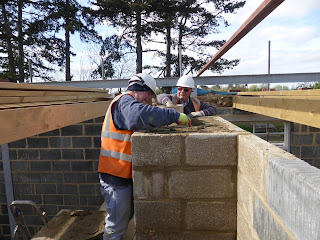 Depending on what time of the day you visited the kerb laying team seamed to vary on who was laying kerbs and who was wheeling the dry mix.
Below Clive and Pat are shown laying the kerb stones and mix and then later Terry resumed the back breaking work. 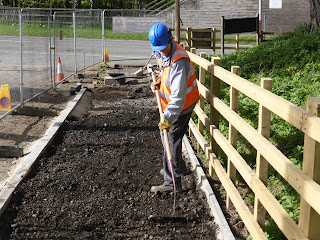 A layer of spent ballast and ash had been used as an infill and Dave, seen here, raked and then levelled before the roller was used to give a firmer surface.

The spear fencing gang lead by Rod last week had got to the end of the flat platform, today it was all downhill (platform ramp). Peter K had constructed several panels that had the necessary correct angle for the platform slope. 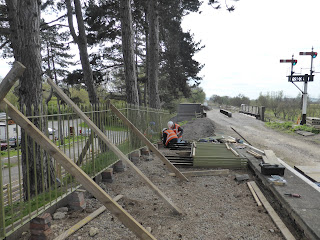 Rod and Keith with Dave's help are on the third downward panel, eventually the Spear fencing will then level and finish at the Bridge. All panels at the end of the day were secured and then concreted in. 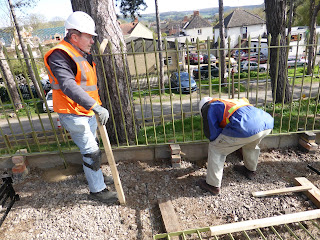 Mike and Brian had gone down to Toddington to paint parts of the canopy and later returned to Broadway to carry on with the de rusting of the recently made spear fencing, then they too were primed.

Outside Graham and Mike started on the station roof panels, degreasing, then washing and then the first coat. The right hand picture shows them drying on what was a warm  afternoon.

Below Peter with Dave H and Ron finished making the painters hut more waterproof and secure, than it had been, with an extra covering and new sides it will help the painters on the days when the weather would be a lot worse than today.

Elsewhere round the site, Vic tended to the gardens and mowed the grass for the first time this year? Whilst Steve held the fort at the bric-a-brac Goods shed.

And finally can we all at  "Broadway Volunteers" say a big thank you to everybody who has subscribed for shares.The target of the share issue has now been reached and without your support reaching Broadway would still be a dream. But there is still time to purchase some shares and every additional amount will enable us to do a little bit more. 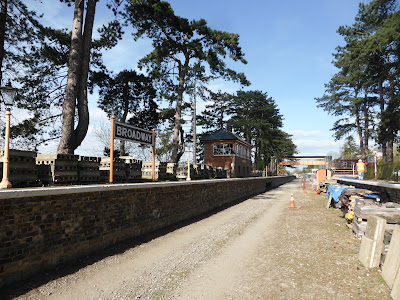 Posted by David Holdsworth at 11:39