It was the last volunteering Wednesday of March and the 25 volunteers that attended today were greeted with the site of a pair of dumpers taking ballast from the car park to the northern part of the track bed. The weather today stayed dry but overcast, the overnight rain had prevented the dust that had occurred with the previous days trips along the track bed. 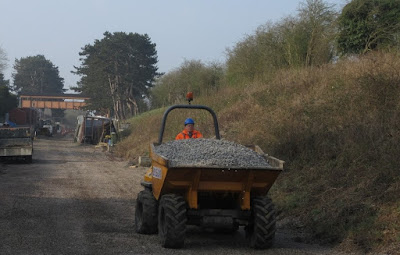 John S is driving one of the large dumpers along with Jo on the other, together they ferried 8 lorry loads of ballast to an awaiting Steve on the JCB who then leveled to the approx height.

Above left shows a picture that Jo had took of the delivered ballast approx 280 tons of the stuff , the right picture show what Steve had achieved later in the day. Also today we saw the first rails that Broadway had seen for many years . Steve had brought them down on one of the previous days from the storage area just past the Childswickham bridge. 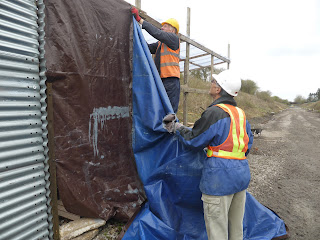 With all the useful wood removed to a new position on platform 2 and the unusable wood sent to the bonfire, it was left to Peter and Ron to strip the outer covering. Below all that`s left is a skeleton of its former self. 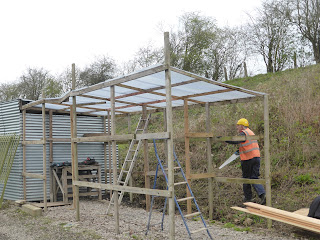 But as ever,  nothing goes to waste at Broadway. The end 2 sections were then split off with its roof still attached and moved to create an extension to the painters area. Next week its sides will be covered to give the painters an additional dry area to paint the spear fencing and Station roof sections. 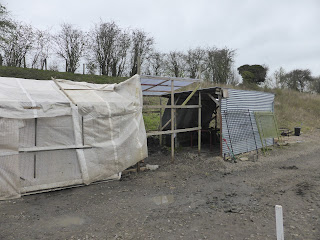 Their were only 2 today working in the painting area; the  " 2 Mikes ", one on the wire brushing the rust off and then one on the first coat priming of the spear fencing.

Down on the drive Terry and Gordon continued with the kerb installation, dry mix supplied by Graham and Brian.


Up on platform 1A Rod and his team continued with the spear fencing erection .


Another 7 panels today and almost to the start of the down slope of the platform 1 ramp.

At the station building work continued on the station chimney, Tony and Bob were today joined by Clive.


Also on the southern end of the station building John C finished off the final arch over the doorway. Mondays picture shows him finishing off the right hand side window, and below that the center arch. 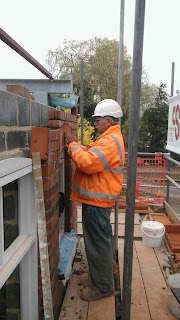 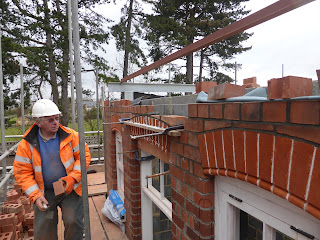 Elsewhere Julie and Steve had a steady stream of punters visiting the shop.
Posted by David Holdsworth at 12:25