Too Wet Even For Ducks!

When the 23 volunteers arrived at Broadway this morning it appeared that the weather was going to play a big part in what we could do today. It was pouring down!! All the morning it rained and after a short bright spell around lunchtime it then proceeded to rain most of the afternoon.

But for some volunteers work must (and will) go on, come rain or shine.

At the Station Building

Due to the weather no work on the window arches could be started, but a temporary covering was erected over where the cafe fire place/ chimney will be. This allowed Bob and Paul to start work in the dry on re-positioning of the fire place.

And with a little help from his apprentice and Cement Mixer Operative.

By the early afternoon. 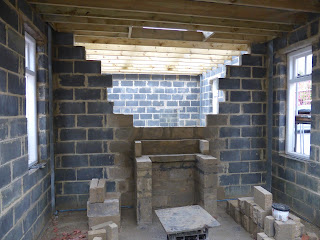 6 blocks up and the fire place (or is it a barbecue?) is taking shape.

On the track bed.


There was a needed to see the extent of the footings at the end of platform 1 plus add extra catch pit rings to the existing. In the end 2 additional rings were added. The ballast when laid will be not far off the or even higher!

In the background of the first picture above you can see that Stevie W (on JCB) and John S (on Dumper) have been clearing and leveling the track bed up to the boundary. John below is seen returning along the very wet track bed to an awaiting Steve ready to fill once more.


Next week the first of the ballast loads are due to be delivered to be stored in the cleared area, watch this space!

Another team not phased by the constant rain were Rod, Terry, Keith and Dave who continued the erection of the spear fencing on platform 1A. At the end of the day 7 panels had been erected and concreted in.

By lunchtime the gang of three had finished what they could at Toddington, so they returned to Broadway to wire brush, clean and paint the spear fencing panels that Peter K had fabricated the previous Saturday.


The 2 Michaels wire brushing and preparing a panel in the ever leaking painting shed, then on the right Graham applying the first coat.

Elsewhere around the site

The signal box fire place had its hearth fitted by John C and Peter Q.
Vic was working on and tiding his gardens, then later he helped Peter Q and Dave H move short sleepers to the approx site where the containers will be moved to in the preparation to clear platform 1. 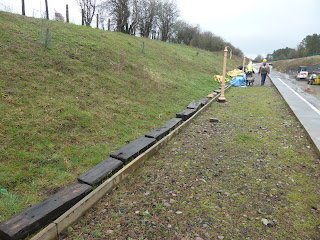 Afterward Peter and Dave moved on clearing the wood shed of all non usable off cuts .

Down the drive Julie and Steve stayed dry in the sales shed, greeting the few brave people who did venture out today .

And have I mentioned that it `rained all day`, what a difference from the previous Wednesday.

Posted by David Holdsworth at 09:48