Oh What a Lovely Day

First off a quick update on Saturday and Monday. Five volunteers were on site Saturday, work included cutting and laying some of the infill blocks between the rafters. Also a start was made sorting and moving some of the stocks of used and new timber to allow for the removal of the timber store before the northern end track work starts.
Monday saw nine volunteers working on various tasks including completeing another window arch. Other windows were prepared for arching by the laying of the first angled bricks each side, this necessitates a lot of measuring and cutting. 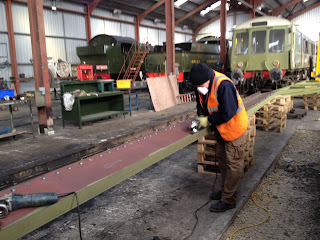 On a lovely spring day, shirt sleeves by mid-day, nineteen volunteers on site at Broadway and a further three at Toddington.
You'll note from the first picture at Toddington that with the removal of the marquee some room has been found in the loco shed for the preparation and painting of more of the canopy steelwork which is now flying off the production line. I know, not literally, it's too heavy, but you get the drift. Mike is seen wire brushing one of the valances, I suppose you'd call it, on which the dagger boards will eventually be attached. 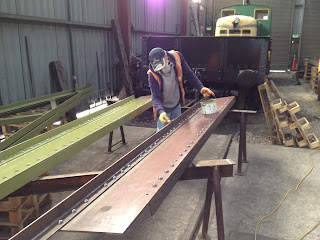 Meanwhile Graham is priming one they prepared earlier. One of the large trusses is in the background, as are other interesting locos and stock in both pictures. I imagine those who chop up the old pallets are quite happy they have another use for a bit. 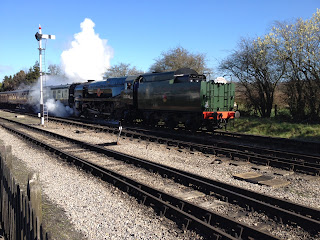 I see one of the painters found time to get this shot of the P & O leaving for Cheltenham, on a glorious day, with a race special. What a way to arrive at the races, glass of champagne in hand, hauled by this beautiful loco past all the traffic jams. 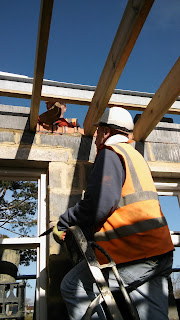 Back at Broadway Clive and Peter Q were at yet more rafter infill. When this is completed and the rest of the window arches a start can be made on the corbelling ready for the canopy. 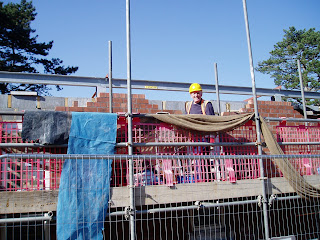 Looking from outside the station, Peter Q is happy in his work. In fact it took quite a shout to attract his attention away from the job. 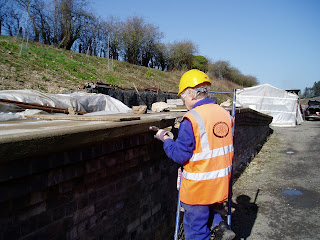 Further down the station Chris is re- pointing some of the edging slabs. They have been insitu for a couple of years now and were only roughly pointed at the time, as the importance was to get the slabs down and needed tidying up. 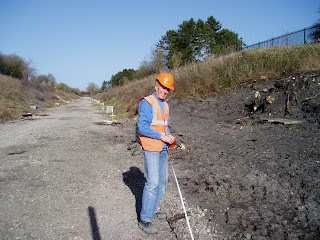 Further north still Gordon was working with our civil engineer and P Way staff to set up the level markers for the JCB driver when the relaying of the formation starts. The yellow cross markers on the posts for the type 1 stone and the blue for ballast level. The plan is to use type 1 stone to build up the levels in some places before ballasting.

Meanwhile down the drive a start was made on laying the front kerbstones for the footpath, after determining a suitable start point Bob, Pat and Terry start the preparation. The footpath will be 2mtrs wide with a 25mm fall towards the drive. The top of the kerb then needs to be 75mm above the finished drive level, take in the fact that the drive has quite a gradient anyway it took some sorting. To start with some digging out was required as ground had been disturbed when the services were installed and this side of the drive was originally a grass verge of sorts. 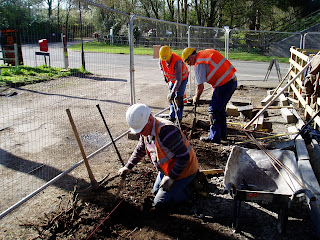 With the groundwork done Bob shovels in the first concrete whilst Terry waits to to level the bed. 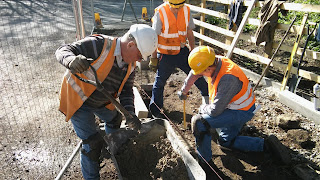 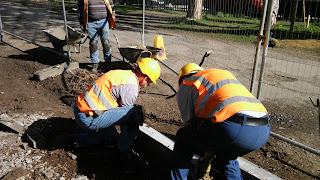 Terry and Pat carefully place the first kerb into position

By late afternoon six kerbs had been laid, Pat thankfully emptying the last barrow of concrete he's fetched from the mixing area at the top of the drive. The reason it's at the top is storage of materials, power water and the spear fencing team using the same mixer as well. 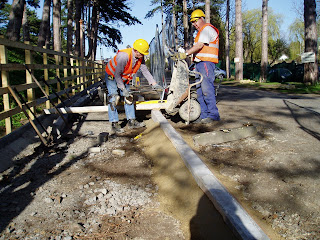 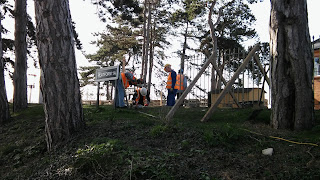 Talking of which on the way back up the drive Tony, Rod, Keith and David can be seen about to augur the next hole. 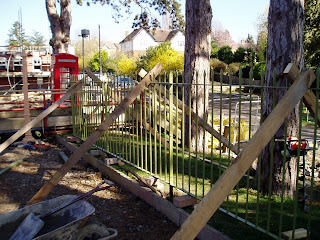 As you can see a start was made on erecting the spear fencing today. Another job complicated by other factors arising from the platforms being longer than originally. Both platforms now end much closer to Station Rd bridge therefore they end up much closer to the top edge of what is quite a steep embankment. This has caused a lot of thought as to positioning the fencing, more on that as we get closer. For now we have started by the viewing platform and will work towards the bridge. 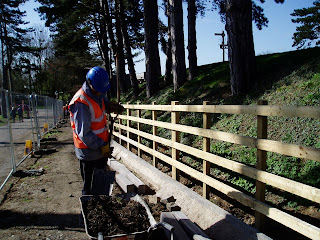 These panels are very heavy and therefore set quite deep. One leg has a 75mm plate on the bottom and the plain leg of the next panel rests on that, the panels are then bolted together propped, levelled and the holes concreted. A fair amount of spoil comes out of each whole and David found a good use for it backfilling behind the path edging down the drive.

By the end of play six panels had been erected, as we were finishing off Graham and Mike called in on their way home from Toddington and decided to get the brushes out and touch up the primer where needed and put extra where the welding met the horizontal bars. 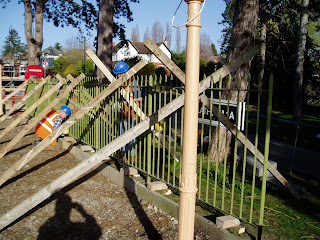 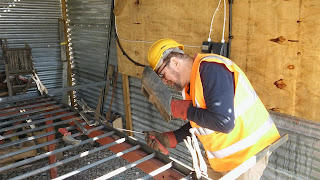 Luckily Peter K, who must take a lot of credit for his skill in manufacturing the spear fencing, was on site today allowing this picture of  his little workshop (lean to) using the jig he also made to work on another panel.
In other areas Brian our storeman was sorting through his storage container in readiness for it's removal to the maintenance area when the base is down. Julie was in the sales shed spreading the word to our numerous visitors. The volunteers on the drive and near the viewing platform getting plenty of favourable comments amongst the questions. Another good day.