With 14th Feb out of the way, 16 volunteers at Broadway & 3 at Toddington were keen to continue with the regular tasks. The day started promisingly mild & bright, but by lunchtime showers arrived & by 2pm were just too heavy for most jobs to continue.
Perhaps if some of us had taken St. Valentine's day more seriously we would have been rewarded with a nicer day. If only one of G J Churchward's Saint class had been named "St. Valentine" the lads would take more notice of 14th Feb? 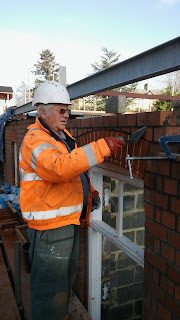 Just a picture from Monday 13th, when a small team of 7 made good progress on the station building in cool but dry & bright conditions. Here John C is pointing up after building another window arch, which involves cutting intricate shapes in the row of bricks over the arch.

Back to Wednesday, and at the start Terry, Rod & Clive help John C load 5 panels of recently built spear fencing. John took these to our Toddington marquee for cleaning & priming.
Can readers come up with a suitable caption? 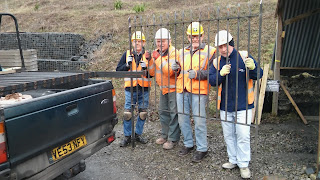 Dave B & Gordon assessed the northern area of our site in readiness for clearance work. We will get a visit from Viv Haines Transport next Wednesday and they will be taking surplus materials including some unusable lampposts to Winchcombe for storage. Also, various heavy items will be moved away from this area to leave it clear for the Permanent Way department. They will take over this area and tons & tons of ballast & levelling material will soon be delivered here. 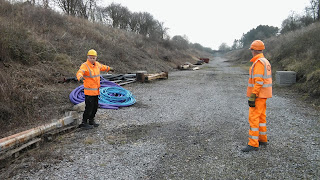 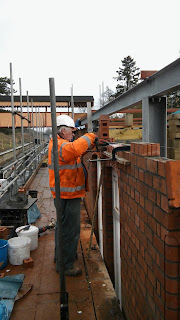 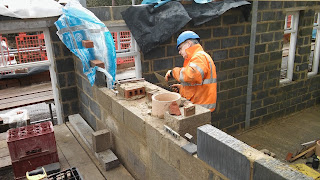 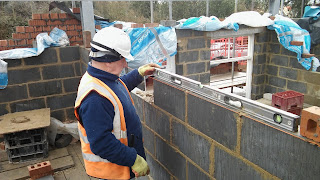 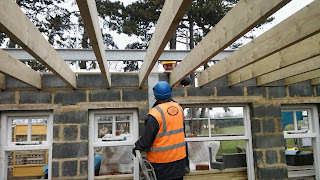 Rod & Terry soldiered on with setting more edging slabs for the driveway. Keith & David supplied them with endless barrow loads of concrete mix.
Whilst volunteers on the station building had to give up by 2pm, the driveway team battled on until nearer 3pm, & got soaked in the process. 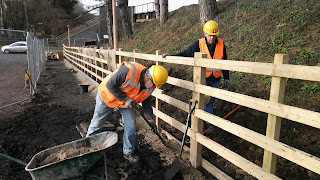 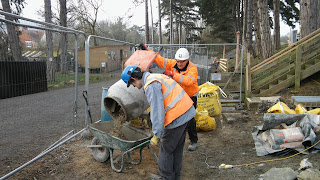 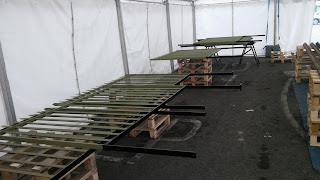 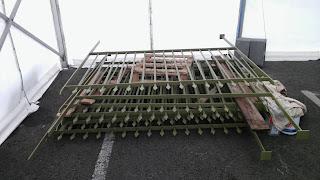 Meanwhile back at Broadway 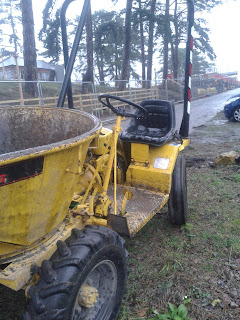 The dumper was left out in the rain during the afternoon which means someone gets a very wet backside on the journey back to base!
Paul Carter