Expecting a Visit from Doris!

A mild windy start gave way to showery windy conditions later in the day.
16 volunteers signed in at Broadway today plus the full compliment of 4 in the painting team at Toddington.

Starting with a report from the Toddington marquee, Mike S tells me that, by the end of play, 13 spear fence panels are primed & ready for transporting back to Broadway. Fairview delivered to them 4 dumpy bags of sand. You might ask why painters would require sand and in such a quantity. Well the heavy bags are on loan to act as anchors for the marquee in anticipation of a visit from Storm Doris on Thursday. 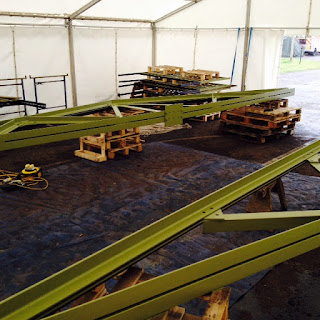 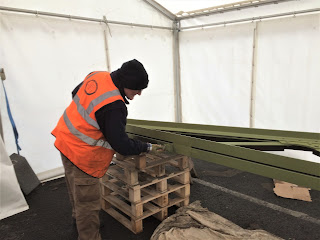 Mike T "slapping" some more on 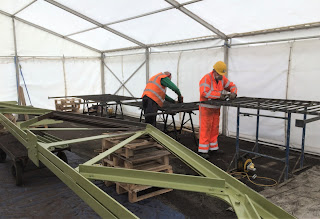 We started the day at Broadway with roughly 14 volunteers. Terry had to work on his own laying driveway edging slabs, until Rod returned from a meeting, supported by Pat & David providing the concrete. By the end of the day he had laid a record 17 slabs - 15.3 metres ! What do you think of that Rod ? 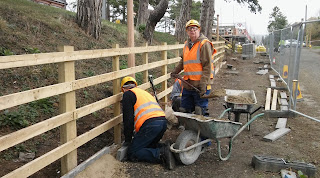 Pat assisting with the tamping of concrete.

Tony, John S & Clive were working on internal walls of the station building. Peter Q & Brian T continued with spacing out more ceiling joists for the restaurant area & then filling in with cut blocks. 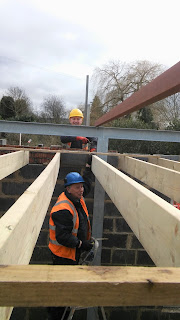 As mentioned last week, we were getting a visit from Vic Haines Transport. He duly arrived, nice and early, to assist with clearance of the Northern area of  the Broadway site. Firstly he was asked to move piles of catch pit rings onto platform 2 for storage. 2 heavy bridge parapet capping stones & several lamp posts were then loaded & transported to Winchcombe for storage, with assistance from Gordon. A second trip by Vic Haines Transport was necessary later in the day. 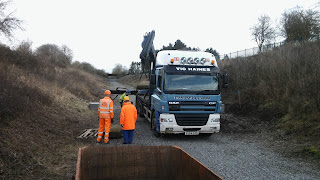 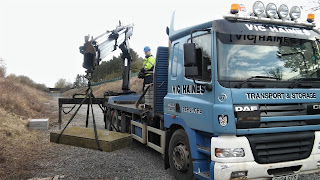 A  large capping stone being loaded. 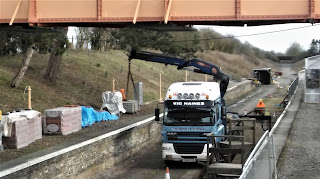 Catch pit rings being moved onto platform 2.
.
Workwise it was a short afternoon with rain making it unsuitable for much more block laying & driveway concreting in of edging slabs.
This report is being prepared Thursday am, & I can tell Doris isn't too far away now !