Oh What a Grey Day


17 intrepid volunteers braved this cold grey day at Broadway whilst 4 others had the relative luxury of a heated marquee at Toddington. 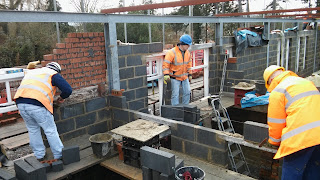 Bob W & John C prepared brickwork in readiness for John to build more arches over several platform facing windows. This work entailed Bob having to cut/ taper several bricks for either side of the window arches (see example in next pic.). 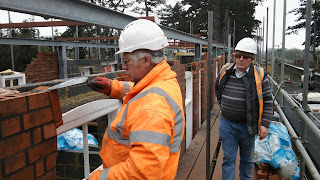 Keith & Brian T brought ceiling joists up and spaced them over the canteen area. David steadying the ladder for Keith. Brian seems pleased he's in the frame! 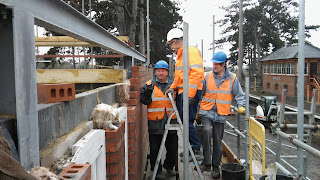 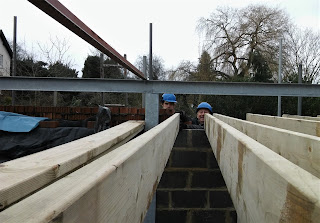 Yoo-hoo Brian!
Our 3 dumper drivers received a visit from Tyrone of CRS Training Services. It was time for them to receive a refresher session on dumper truck safety issues & an appraisal of practical use. After the session Tyrone was suitably satisfied with the guys. 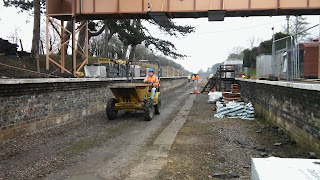 Escaping from the examiner? 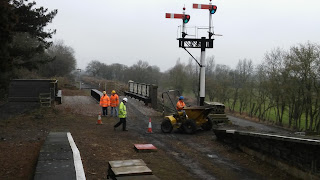 Richard from Fairview delivered an urgent supply of aggregate & cement for the driveway team.
After Rod & John C had dropped more hardcore down & Terry had rolled it, Terry was able to continue with the laying of more edging slabs up the side of the driveway. With Fairview's supplies now to hand Paul C supplied Terry with barrows of concrete. Vic, meanwhile, was busy digging out a shallow trench to enable extension of the concrete footings for the edging slabs to sit on. 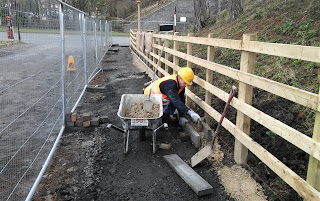 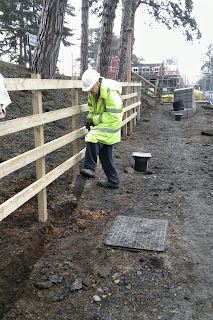 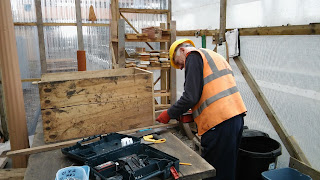 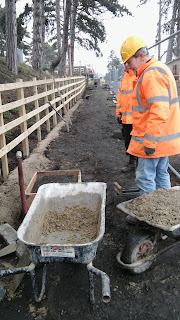 At Toddington:
Outside the marquee some steelwork for our station canopy is laid out, already anti-corrosive primed. 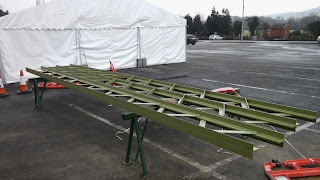 Inside the marquee I found a hive of activity with Graham & Mike finishing off anti-corrosive priming & starting black painting of several panels of spear fencing. Mike S & Brian, meanwhile, had the messy task of wire brushing more panels in readiness for etch priming. 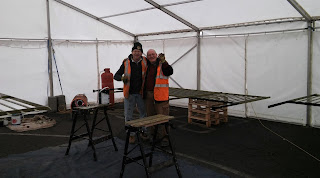 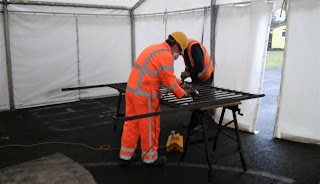 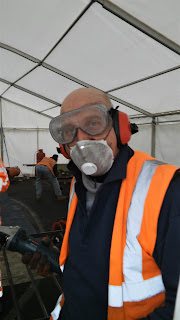 "Take me to your leader"

The weather forecast for the next few days doesn't look too promising. Let's hope it will be kind enough on Saturday.