It was the 1st day of February, not quite yet the middle of winter, and lunch time saw several volunteers sitting outside catching the sun's rays. Not all of the 24 volunteers who turned up thought the same but as the day had started overcast and damp it was a pleasant surprise. It must be a  "First for the First"

To the Station Building

Bob, Tony and John S were the blocklayers for the day, cement mix was duly supplied by Paul.

After a short discussion Bob and Tony commenced block in the cafe area and John in the store room and Booking Office area. The aim was to finish the blocks to a height so that next week the ceiling joists could be installed above the cafe. 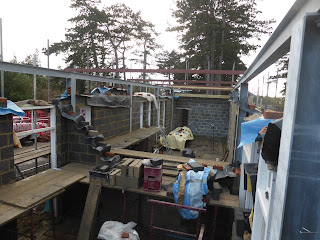 Finish of the day saw all the block work to the required height , next week ceiling joists installation weather permitting. 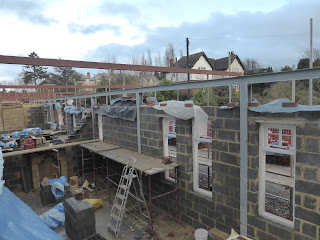 Looking towards the north end of the cafe and the fireplace.

Elsewhere on the station building Peter Q and Dave H were blocking and bricking between the ceiling joists around the entrances to the toilets. 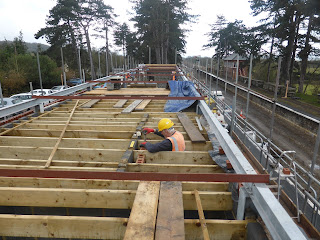 Pete again, squeezing between the joists, inserting blocks and then a row of bricks. Below, out of sight, Dave H is cementing the parts that Peter can't reach.

On the track bed

Over the coming weeks the track bed to the north of the station has to be cleared, the area has, until recently, been used as a storage and dumping ground. Later this area will handed over to P/way and they will start to bring in the track bed ballast .

One of the items stored here were the platform copping slabs, these needed to be moved towards the platform gap.

With the help of Richard and his Fairview lorry these were duly moved south nearer the platform gap. Behind Dave B, to the south, as far as the dumper shed, all needs to be cleared and still more to the north of this view.

Rod and Terry, having done what they could on trackbed clearance, then moved on to the drive edging slabs. Vic had earlier started earlier on this tamping a line of mix ready for the slabs. 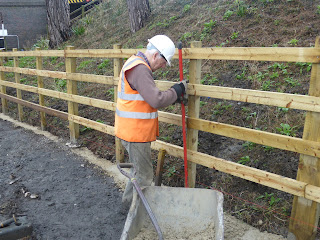 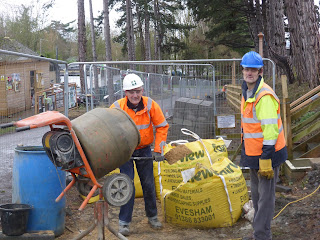 Mix supplied by Keith and assisted by Dave. 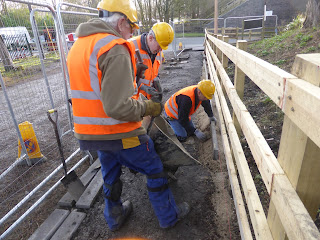 Terry on his knees fixes another edging slab, the line of slabs behind shows the extent of what has been done so far. Earlier they had filled and rolled to even out the level by the slabs.

Graham, Brian and the two Mikes continued the preparation and painting of the station canopy and spear fencing , Two pictures below show the extent of their efforts to date.

Elsewhere around the site Chris inspected the platform walls and copping slabs, some parts now need some slight attention having been exposed to the elements now for a few years without any maintenance.

Posted by David Holdsworth at 11:58