A cold but sunny morning greeted the 24 volunteers who turned out today, the temperature failed to rise much from the frosty start of the day so on the station building no brick or block laying was attempted. Volunteers then fell back on to the previously started jobs around the site. 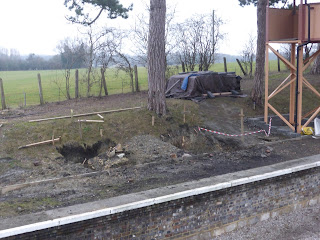 One of the main exercises was to excavate the two holes for the foundations of the bridge stairs on platform 2. These had been started on the previous Saturday. The left hand hole shows the remains of the staircase upright and its concrete foundation, this proved to be a large time and energy problem. It was to heavy and out of reach for our mini digger to be extract in one piece. So it was left to Bob, Tony and John S to have turns in breaking it down to a manageable size.

This was their third day attacking the concrete "lump" but eventually the concrete had been chipped away from the steel work making it a reasonable size to be removed and the hole was able then be cleared again by John C in the mini digger and Tony on the dumper.

The hole was finally cleared of the created concrete rubble and as this hole has to be deeper than the intermediate foundation more digging was required only to reveal another sizable lump! 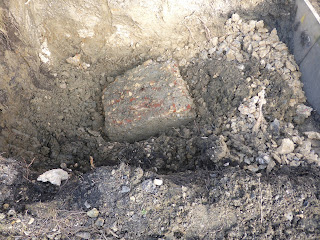 Out came the demolition hammer again and after a few hours this slab two had been reduced to sizable rubble and then removed.

Back at the left hand hole Peter Q and Dave H, with help from many others installed the shuttering box for the intermediate stairs support.

No block or bricklaying on the station today but it didn't stop Peter Q and Keith cutting the blocks to go in between the previously installed joists and cutting and getting the blocks ready for use, when the weather is more forgiving, in the cafe booking hall areas.

Also in preparation for another day, Dave H and Brian cut down the ceiling joists, which will be installed in the cafe when the block work reaches the required height. 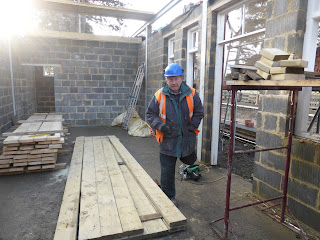 Back on the drive.

Rod, Terry, Vic, Pat and Paul continued the laying of the edging slabs . 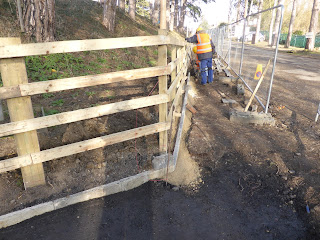 Onwards up the drive the edging slabs go, the corner by the pavement has been filled and tamped. 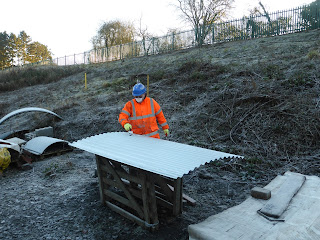 After last week, when there was a large army of volunteers working on the roofing panels production line!, here is Mike now working on his own. Eventually Dave came to help and keep him company. It just shows how fickle volunteering is .

Posted by David Holdsworth at 10:37