First an update from Saturday, seven volunteers on site working mainly on track bed clearance not only a lot of materials to move but lots of bits blown off the trees by that Doris. Peter K carried on with the production of the spear fencing.
Monday there were six on site and they worked mainly on the station building brick and blockwork with John C continuing with the arches. 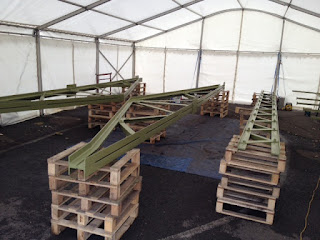 On to today and an update from our four man painting team at Toddington. The Loco dept staff had turned over the trusses, which were started last week, with the tele-handler and delivered some more steelwork for the lads to prepare and prime. Seen here completed. 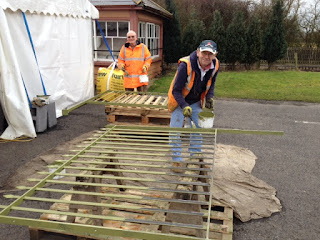 As it was a bright, although cold, morning Graham and Mike carried on with the priming of the spear fencing panels. Don't worry this isn't the finished colour. 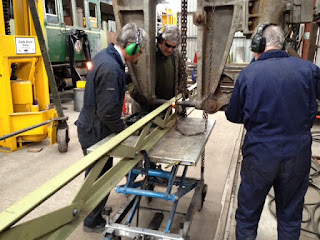 Mike S who took the first four photos couldn't resist a walk into the loco shed to take this one. Three of the loco dept staff are using the riveter on yet another piece of the giant meccano set that is to be Broadway's canopy. Heavy, hot and noisy work, well done lads. 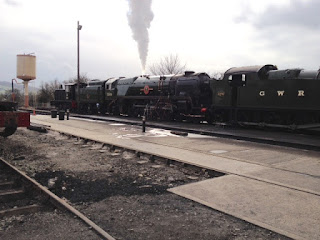 Hearing things going on outside of the shed a quick shot of P & O, in the morning sun, with a good head of steam. Part of the testing after winter maintenance, I think. 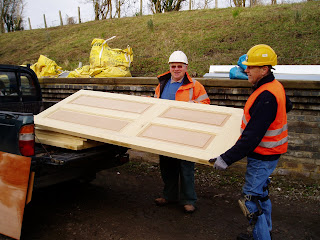 Back at Broadway nineteen volunteers carried out a variety of tasks. One of the first jobs was to unload the station doors that JC had picked up from the manufacturer. These can now be primed and stored until required. Terry and John getting ready to pass them up to the storage container. 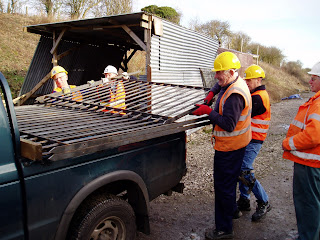 As soon as the truck was empty Tony, Paul, Terry and Peter are loading the latest batch of spear fencing, fabricated by Peter K on Saturday. John C is watching that they don't scratch the paintwork.
He then delivered these to Toddington for the painters and returned the panels that had been cleaned and primed. 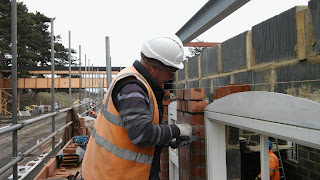 At the station building the brickies were hard at it. Bob W is pointing up some of the detail bricks he has laid between two of the windows. 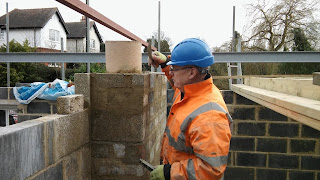 While John S carries on building up the live chimney, sealing the liner into the blockwork as it rises up. 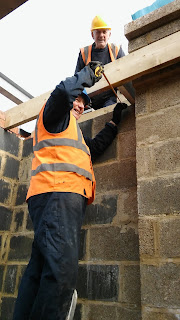 Brian and Peter Q carried on with the fitting of the rafters. Brian checking the correct spacing. Blocks will then be cut and cemented into the spaces. 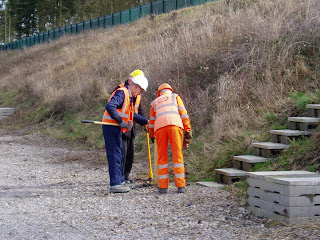 Further up the site, Gordon, Keith and Ian were placing a line of twenty plus markers up the track bed. These will have horizontals placed on them to assist Steve the JCB driver with his levels when the Permanent way team start laying the ballast shortly. 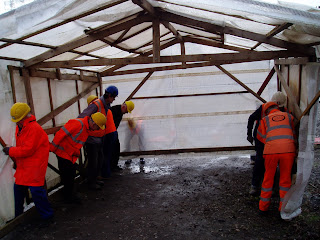 Straight after tea break whilst everyone was still together, a concerted effort was needed to move the Broadway painting shelter. This had to be moved to a new location to facilitate the laying of a concrete base, off the north end of platform 1, for the ongoing maintenance facility for the station. When the area had been cleared Dave B measured up and put in the markers for the base. 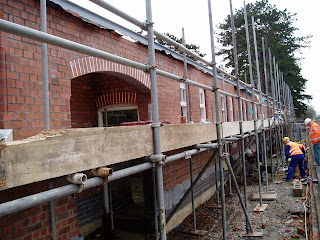 A lot of tidying up took place today. The herras fencing was moved down to the track bed from the platform edge, this will allow additional scaffolding to be erected on the track bed when the brickwork is finished. The extra scaffolding will be required for when the canopy is erected.
Tony, Clive and John C are clearing away all the offcuts of blocks after the completion of all the internal blockwork, another tick on the list. 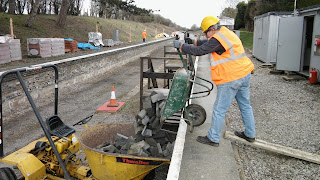 Rod W emptying another barrow load of offcuts into the dumper for removal to the car park area. 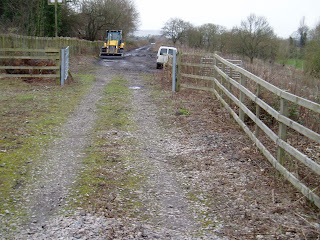 On the return trip I stopped on the Station road bridge, just inside the station site, to take this picture. So what you may ask, more track bed, but if you enlarge this picture, which is not zoomed in, the white line in the distance is the ballast of the extension. How good is that!


As always the sales shed was open and Julie talked to our visitors and continued to raise funds for the station.