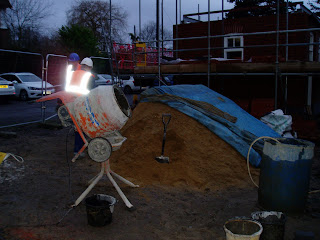 When the early birds of the 23 volunteers on site today arrived the temperature was already above 6c. As it was to be the mildest day of the week there was an early rush to get the mortar mixed and the bricklayers started, so that they could get in a good day before the big cover up for the expected frost later. Keith S tends the mixer, Paul is already delivering the first mix.

Later on another mix is about to be delivered, initially a black dyed mix needs to be done for the facing bricks followed by normal colour for the blockwork.

It was great to see the brickies able to get on, Tony seen here on the infill between the windows and doors of the booking office platform side. 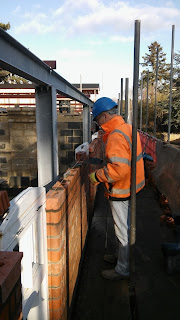 John S is working on the station forecourt side, as you can see the levels are steadily rising to the point where more of the lintels and arches can be set. 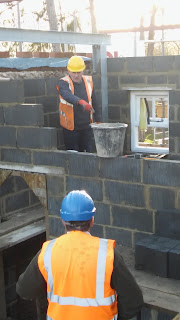 Here who put that bucket there? While the brickwork went on outside Peter Q assisted by Dave continued with the blockwork inside. 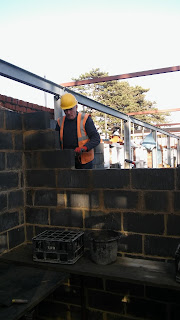 Peter cracks on with the blocklaying and by the end of play had reached a level where more ceiling joists can be positioned, hopefully next week. 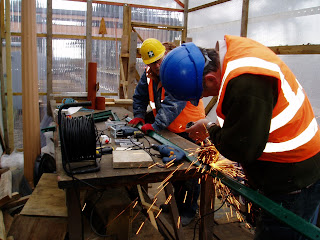 Today we also had the opportunity to finish the palisade fencing on the Broadway side of the drive, an awkward size gap of just over to panels was left to finish. To save having one panel two palisades wide it was decided to have three shorter ones. This meant three pairs of horizontal rails had to be cut and the mounting slots recut.
Dave and Mike set to on this task. 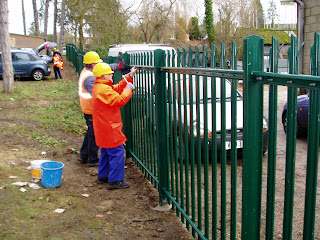 By mid morning the rails had been fitted and all the palisades attached, Mike just finishing attaching the palisades. Chris is finishing the tightening and shearing off of the anti tamper nuts.

With the palisade fence completed the fencing team went back to the wooden fencing on the other  side of the drive. Rod, Mike and Terry attaching the rails to posts erected last week. The team, assisted by Dave B, went on to erect more intermediate posts and rails. 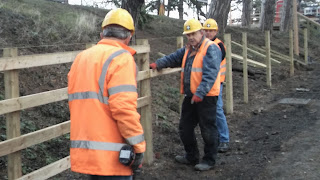 By the end of the day this was the drive looking towards Station Road, about threequarters of the fence is now completed. Not much more of it can be erected until the gap in the platform is infilled and the ground level raised, the faintly seen line is at the finished ground level. 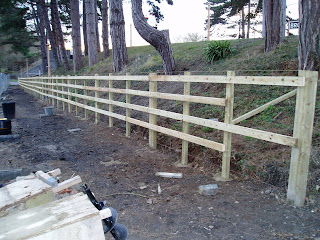 As always other work was taking place, Ian spent most of the day strimming trying valiantly to keep the site as tidy as possible. Dave and Keith spent some time sorting and restacking the detail bricks, some being stored on platform 2 for when we eventually have the funds to build the waiting room.
An important milestone today was a small party going to Toddington to start on cleaning down and priming the steelwork being produced there for the station canopy, Graham assisted by Mike, Mike S and Brian have plenty to do for the next few weeks.
Finally Julie and Steve manned the all important Goods Shed.