Last One of the Year 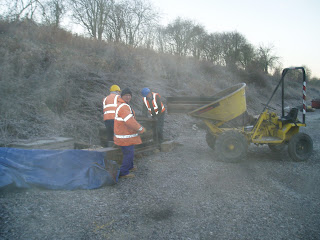 Ten volunteers decided it was a good idea to work off a bit of the Christmas excess. The forecast had been freezing fog, luckily at Broadway the fog didn't materialise. Unfortunately with a frosty start and temperature not getting above three all day no brick or block laying could take place. It was decided to have a party carry on with the clearance of the trackbed north of the station. Peter Q, Dave and Tony loading the dumper with the wooden steps salvaged from the old footbridge staircase and taking them to be stored near the the footbridge on platform 2. 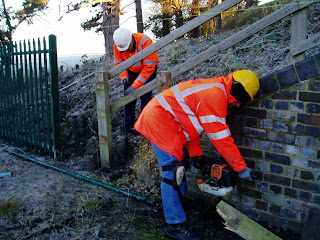 Another group carried on with the pallisade fence down on the main road. Terry is using the augur to prepare the hole for the last post, while Keith S is removing some soil and stone from behind the post supporting the guard rails on the bridge wing wall. This will allow the post to be moved slightly to give clearance so the horizontal rails can be fitted. 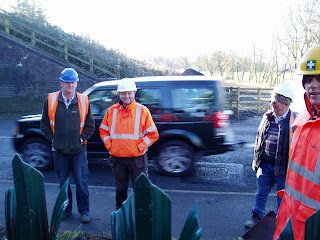 Whilst tightening some of the security bolts on the pallisades, I had a feeling of being watched. The others having moved all the steps had come down to see what we were up to.
They then went on to move a large quantity of bricks and blocks onto the scaffolding, at the station building, so that work on laying could continue as soon as the weather allows. 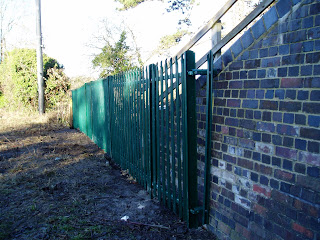 By lunchtime work on this fence had been completed including some brackets made by Pat to enable a pallisade to be fitted on the end. This was to take up the gap caused by the sloping of the wing wall. After dinner the fencers moved back to the wooden fence in the drive and erected five intermediate posts. 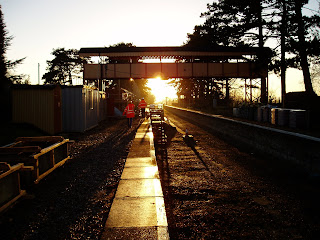 The sales shed was bravely, in this cold, manned by Edna and during the day we had lots of interested visitors.
With the light failing and temperature dropping rapidly it was decided to pack up for the day. After putting the kit away we were walking back to the mess hut and I noticed the sun was just about to appear under the centre span of the footbridge.

Can I finish with a little correction for a couple of our blog comment writers, whilst Jo does an excellent job on the Extension and Hailes Halt blogs he has had no input to this blog for many months. Since the station blog was renamed it has been written by a group of the Broadway volunteers on a rolling rota.

Finally, on behalf of all the volunteers at Broadway, I would thank all our readers for their support and wish you all a Happy, Healthy and Prosperous New Year.