A grey and cold morning greeted the 27 volunteers to site today, the temperature kept above the magical 4 degrees needed for the brick / block layers to do their stuff and soon the mixer was on the go.

Four groups of volunteers move on to start the various on going jobs around the site.

First to the station building 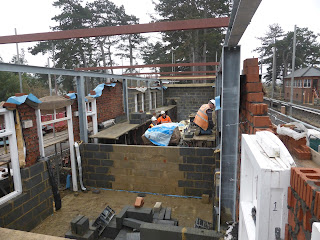 Only two block layers today, Bob seen on his knees starting a new section of blocks in what will be the cafe area, Keith and Paul have then started to rearrange the trestles and scaffolding boards to the uncompleted sections. 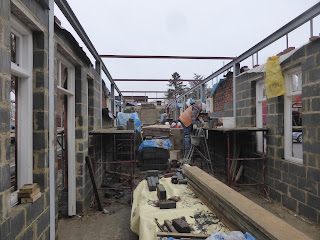 From the other direction, Bob is now swapping sides, more than half the room has been done now. Below under the cover of the tarpaulin are the ceiling joists, which when the block work has been completed will then be installed above.

Elsewhere Clive also was blocking, mainly in the Store room and Entrance area.


Elsewhere on the station building 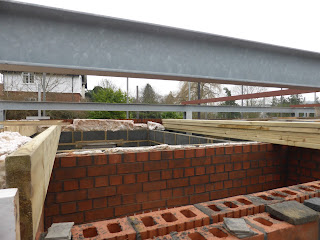 The area above the disabled toilet was ready to have the ceiling joists installed after the brick and block work has been raised to the correct height. To the right the ceiling joist have been lifted ready. Below, Paul and Brian pass another Joist to Dave H . 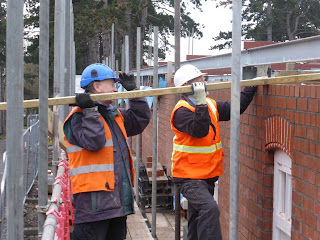 Later after much shifting and re-shifting, levelling and re-levelling , we had covered the disabled toilet and entrance area.

Meanwhile to the North.

A large team lead by Mike, with Dave B, Dave, Ian and later Brian and Graham, commenced the preparation of the station roofing sheets.


A production line was then formed which included degreasing, etching and then when dry priming with grey paint.

The start of the line, drying in the open, Graham then applying the grey primer. Many, many more sheets to go.

Rod and Terry with Vic carried on with the pavement edging at the bottom of the drive. They had a head scratching day with levels etc but by the end of the day the first edging slab was in position and next week they will ready to start the long drag up the drive. 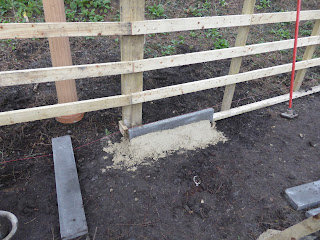 Elsewhere around the site.

Julie and Steve maned the Broadway Goods shed, the dumper had a service, the electricians did their half yearly PAT testing on our electrical equipment and some men with folders had meetings!

Down at Toddington,  John C and Graham attended the erection of a marquee, which now covers the station roof metal work. This will allow our painters to carry on the preparation work in reasonable conditions.

Posted by David Holdsworth at 13:17